The Richmond district after nine kids and almost 50 years... 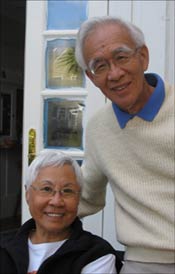 On October 15, 2005 we interviewed longtime residents of the Richmond district, Frank and Jennie (Chong) Jue.

Jennie's first memories of the Richmond district come from her high school days. As a bobby-soxer living in Chinatown she was one of the first group of Chinese-Americans to attend Star of the Sea High School:

"Somehow they were having an outreach kind of a program and they gave us a big break on tuition at that time. There were four of us that came out. It was strange, because in those days we don't know too much about things outside of Chinatown. You don't travel that much. You still have the trolley cars and the buses, and very few people have cars. So you're not really exposed to a lot. So it was interesting. [B]ut all the girls at the school were very nice, very accepting."

Jennie married Frank Jue. In 1958, after having two children (with another on the way), Frank and Jennie thought their Chinatown apartment looked a little small and the Richmond district called:

"Well, we were looking, actually, in other areas, but in that time and era, we were advised not to buy in certain areas because of neighbor animosity and stuff like that. [...] And I was in no mood to fight it. When we first moved out here [in 1958], there weren't too many Chinese out here. It was quite a cosmopolitan area and we had everything and everyone here. A lot of Irish, a scattering of Chinese, a lot of Russians."

Frank and Jennie bought a house on 11th Avenue and raised nine children there from 1958 on. Star of the Sea Grammar School didn't have a year without one of Frank and Jennie's kids from 1959 to 1979. Jennie noted "this was an Irish parish, so there were a lot of large Irish families. So we didn't feel out of place at all." 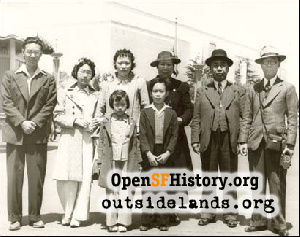 Frank's father, Joseph Sunn Jue, was a pioneering motion picture producer in Chinatown. Joseph took his family back to Kowloon, China to expand his business before World War II intruded:

"[The Japanese] started to bomb Hong Kong, so we came back in '39, just when they had the first World's Fair here. We were considered pretty lucky to have a chance to even get out of that horrible situation." 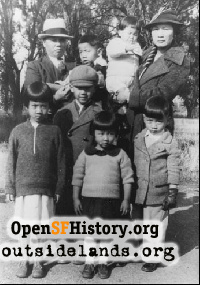 When the Jue family returned to Chinatown Frank's father resumed his business on Ross Alley, and eventually owned the Grand View Theater on Jackson Street. ("The marquee is still there, but it's an apartment building now.")

Jennie remembered ironically that as a teenager she thought the internment of Japanese-Americans during WWII would be good thing:

"[B]ecause anytime you looked Asian then you get persecuted, so we said, 'Good. If they are put away, then they'll lay off us Chinese.' Didn't realize the full ramification of the whole thing."

After so long in the city, and with many of their children moved away, we asked Frank and Jennie if they could ever imagine leaving:

Jennie: "No, I don't think so. I like to be able to walk to places. I don't like to live in a suburb, although I like the sun." [laughs]

Frank: "Can't have everything."

Thank you Frank and Jennie!

Contribute your own stories about the Richmond.