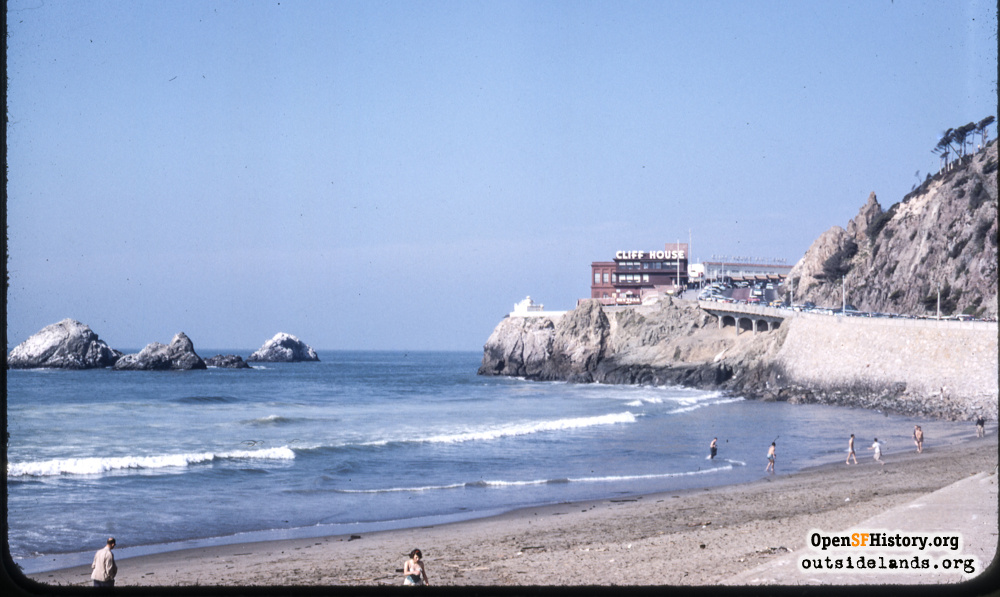 Was it a swimmer or a tire company that named the beach below the Cliff House?

In 2010, Mark Lukach wrote a fine article for the Ocean Beach Bulletin about the annual reunion of surfers at Kelly's Cove, Ocean Beach's northernmost meeting of sand and sea just below the Cliff House. Lore, legend, and some long memories identify this patch of rock, sand, and eddying swells as the birthplace of San Francisco surfing, where over the years inner-tube paddlers gave way to longboarders on wooden planks, who passed a metaphorical torch to today's neoprene-clad riders of fish-tails and quad-finned carbon-fiber boards.

But who was Kelly, and why is this area, so important to local surfing history, named after him?

In the late nineteenth and early twentieth centuries, long before the advent of surf culture in California, the future Kelly's Cove was often called "Cliff House Beach." It was a popular place for snapshots. Men wearing bowler hats and women in sand-sweeping dresses would pose for photographs with Seal Rocks to their side and the monumental Victorian Cliff House looming behind. 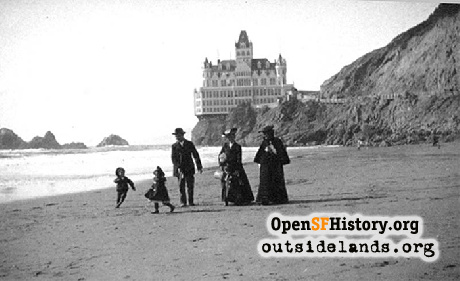 Family on Ocean Beach below the Victorian Cliff House, early 1900s., circa 1905 - Photograph by J.B. Monaco.

In addition to overdressed visitors of propriety, the beach also attracted free spirits, eccentrics, and visionaries. It was a common belief at the turn of the twentieth century that salt water, ocean breezes, and even "sand-baths" improved physical well-being. Men subscribing to these theories soon were running, swimming, and doing various calisthenics at Ocean Beach.

Long before our nation's obsession with exercise programs, these early aficionados of open-air workouts, dressed in singlets or exercise suits of their own design, were seen as slightly odd. And many were. With the exception of large yearly runs by the Olympic Club and other fraternal groups, exercise at the beach brought to the minds of most people a stereotype: an older man in strange swimwear who was a bit of a hermit and curmudgeon, and perhaps a spouter of wild philosophies.

One such beachside character was Old Man Kelly (recalled by some old-timers as “Spider Kelly,” although they may be conflating names with the Spider Kelly club and bar in the old Barbary Coast.) Patrick Cunneen remembers being a sixth-grader in the mid-1940s, making his first trips to what everyone called Kelly’s Cove: 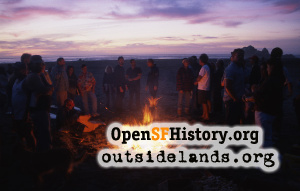 Regulars and old-timers reunite at Kelly's Cove in 2005. - Photograph by Dennis O'Rorke.

“We used to save all the dough we could during the week—bottles, cans turned in for recycling—and nip the 7 streetcar to Playland at the Beach. We’d spend all our dough there on rides and candy, and then we went over to Kelly’s to build a huge fire. Nothing a kid likes better than making a big fire out of driftwood. The guy we thought was Kelly had a platform with a windbreak up on the rocks, no roof. It was made of driftwood and he had his own little fire pit. It was like he lived there.

“Other guys, older guys like firemen, cops and bartenders, hung out there too, and would often chase us kids off. The old guy would swim and run. We assumed that was Kelly.”

Others heard the mysterious Kelly would take a daily swim around Seal Rocks, and many stories have Kelly disappearing one day out on his swim. A few tales end with him dying on the beach. In 1938, before Cunneen's time, a man named Samuel Kelly, "well-known to beach habitues," did die on Ocean Beach after his daily swim. 1

By the time Cunneen was in high school, a younger set of athletes—swimmers using flippers, runners and sprinters, early surfers—frequented Kelly’s Cove, most eschewing team sports at school for the outsider life at the beach. One group wore swimsuits with skulls and crossbones on the chest.

It was about this time, the late 1940s and early 1950s, that the crowd at Kelly’s began the practice of replacing driftwood bonfires with an old car tire set alight. Cunneen remembers having to cut small chunks of rubber off to get the fire going, before tossing the rest of the tire on. The oily smoke and fire of the tire was a beacon on shore for those in the water, while it kept the beachside crowd warm on foggy days.

Tires bring us to a second theory for the naming of Kelly's Cove.

In the 1920s, the Kelly Tire Company had a billboard just east of the Great Highway and Kelly's Cove, against the cliff of Sutro Heights. Could the billboard have provided a shorthand identification to arrange get-togethers on the former Cliff House Beach? Or is it just a coincidence?

Pick your favorite theory, but I prefer to think the name originated as a memorial to a man who embodied the spirit of beach recreation rather than corporate advertising. 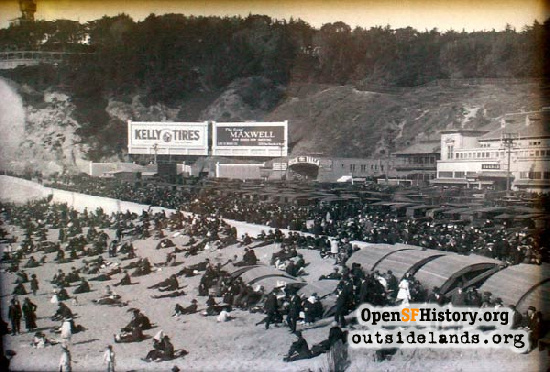 Kelly Tires billboard below Sutro Heights, possibly the origin of the Kelly Cove name., circa 1916 -