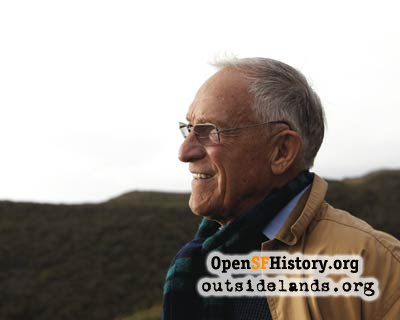 Patrick F. Cunneen was born in San Francisco in 1933 and grew up on 21st Avenue in the Sunset District near Golden Gate Park. He attended St. Anne’s of the Sunset Catholic School at Funston Avenue and Irving Street and then Sacred Heart High School. After two years at the University of San Francisco, Pat served in the United States Coast Guard during the Korean War. After marrying his wife Betty, he worked 38 years in the Daly City Fire Department.

Pat first started visiting Kelly’s Cove in the early 1940s when he was in the fifth grade. In 1969, after what he describes as his "dark days," Pat quit smoking and drinking and began running. His wife Betty was one of the founders of the Pamakid Running Club and as he remembers, he "started to run, jump, and play, and really had a lot of fun and the whole family got into it too." Betty passed away in 2012, but Pat is still an athletic, robust man who loves to hike and be outdoors.

The interview took place in Sebastopol, California and was conducted with other former Kelly’s Cove denizens, Dennis O’Rorke and Paul Judge. It was recorded on a digital recorder, transcribed, and audited, with Mr. Cunneen’s memories edited from the group discussion. Mr. Cunneen reviewed the interview and offered clarifying edits for incorporation. [Read the interview.]