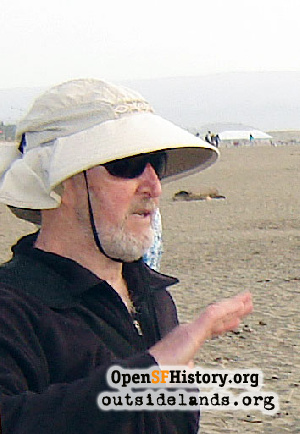 Jim Gallagher grew up as the oldest in a family of twelve children in San Francisco's Richmond District. Born during the Great Depression of the 1930s, and being part of such a large family, Jim was motivated to start working at a young age. He changed high schools twice to have better hours for jobs. As a teenager, around work and school hours, Jim began swimming, body surfing, and eventually board surfing at Baker Beach, China Beach, and Kelly’s Cove at Ocean Beach.

Mr. Gallagher has always been athletic, and the attractions of Kelly's Cove revolved around running, swimming, surfing, and the occasional game of "wall ball." He joined the San Francisco Fire Department in 1962, but kept surfing at Kelly's and other locations into the 1970s. He witnessed the social scene at Kelly's Cove grow and change, and in recent years Jim has acted as a Kelly's Cove historian, interviewing older surfers, gathering photographs, and generally documenting the history of surfing at Ocean Beach.

The interview took place in Mr. Gallagher’s house in San Francisco's Sunset District. It was recorded on a digital recorder, transcribed, and audited. Mr. Gallagher reviewed the interview and offered clarifying edits for incorporation.