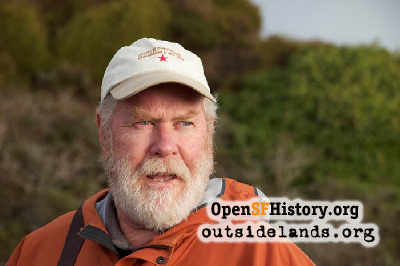 Paul Judge lived in the Outer Richmond District from the 1950s into the 1970s with a back-window view of the Pacific Ocean. A love of nature and maritime life, passed down by his father, drew Paul to the activities and people at Ocean Beach’s Kelly’s Cove.

Born in 1950, Mr. Judge went to Richmond District parochial and public schools before graduating from Washington High School. Family outings and walks with his father took him all over the city and Bay Area, and Paul made his own childhood ventures from Golden Gate Park to China and Bakers Beaches, to the seawall at Fort Point. Beginning in the mid 1960s he followed friends to Kelly’s Cove to hang around the bonfire and the wall with surfers, skateboarders, musicians, and philosophers. Mr. Judge is a volunteer and frequent attendee of the annual Kelly’s Cove reunion. He still has a love of the natural world and the ocean and volunteers for the National Park Service as a docent at the Lands End lookout.

The interview took place in the backyard of Mr. Judge’s house in Sebastopol, California and was conducted with other former Kelly’s Cove denizens, Dennis O’Rorke and Patrick F. Cunneen. It was recorded on a digital recorder, transcribed, and audited, with Mr. Judge’s memories edited from the group discussion. Mr. Judge reviewed the interview and offered clarifying edits for incorporation.