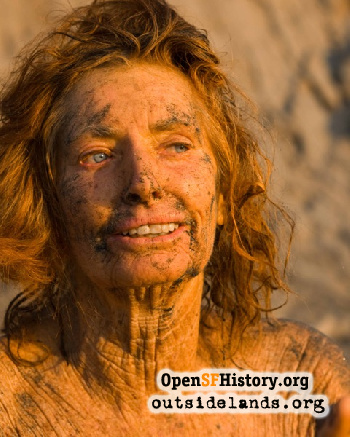 No history of Kelly’s Cove can be written without Carol Schuldt. Her connection with Ocean Beach reaches back sixty years. Her pink house facing the ocean on La Playa, brightly adorned with sea-life murals, tile work, and her riotous gardening, is a local landmark. Her decades-long presence at Kelly’s Cove, along with her vibrant personality and openness, has made her known by many as “Queen of the Beach.”

Born in 1933, Ms. Schuldt grew up in San Francisco and attended Lowell High School. Her early memories of the city during the Depression and World War II include scenes of poverty and desperation downtown mixed with childhood freedoms of playing in Golden Gate Park and Playland at the Beach. In the 1950s, Carol worked on fishing boats, was drawn to the beat scene of artists and intellectuals in North Beach, and also began visiting Ocean Beach frequently to swim and socialize. She met her first husband Tambi Tavasieff there, and the couple, with their children, became fixtures around the Kelly’s Cove bonfire. Now in her ninth decade, Carol still swims and suns herself at the ocean.

The interview took place in Ms. Schuldt’s house on La Playa in the Sunset District of San Francisco. It was recorded on a digital recorder, transcribed, audited, and lightly edited for clarity before being given to Ms. Schuldt for review.