From 2002 - 2006, the Western Neighborhoods Project worked to save four refugee cottages built after the 1906 San Francisco earthquake and fire. The four shacks were hauled from a refugee camp and cobbled together to form two cottages in the outer Sunset district, likely in 1907 or 1908.

We have successfully found homes for all the shacks. Our fully restored cottage is now the property of the San Francisco Museum and Historical Society, and is now in the San Francisco Zoo's new Conservation Center. The shack should be open for public perusal by the Fall of 2009.

The other three cottages are now in the hands of the 5th Avenue Institute in Oakland, California. This nonprofit is very excited about restoring the cottages into artist studios. We'll let you know how their work progresses. 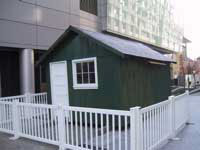 April 3-29 2006: Our restored earthquake cottage was on display on Market Street for the month of April 2006. Over the course of the month we had over 13,000 visitors who learned the story of the earthquake refugee camps throughout the City. We want to thank all the volunteers who helped, the Department of Building Inspection who gave us the space, and, most of all, the throngs of visitors who came out to see us!

Our restored Kirkham shack was on display with an exhibit on the science of making structures earthquake-resistant. The cottage sat under a big white tent on Market Street (at Yerba Buena Lane, between 3rd and 4th Streets), which was helpful in a very rainy month.

We were open for business at 5am on April 18 to commemorate the earthquake's 100th anniversary. Being just half a block from the Lotta's Fountain event, we were fairly swamped with visitors and the media. 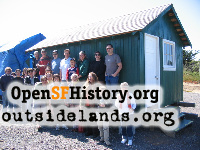 March 19, 2006: We entertained a nice crowd of volunteers and admirers for a barbeque at the shack work site in the San Francisco Zoo's back lot. 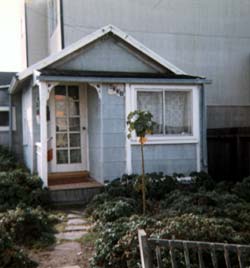 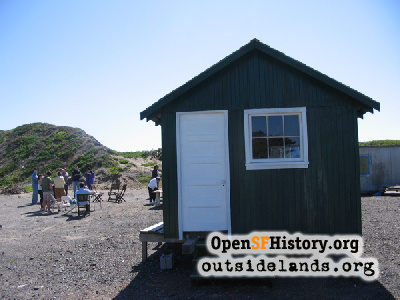 "Shack One", formerly 4331 Kirkham Street (1969 photo courtesy of Linda Fielding), ready for the 100th anniversary of the great Earthquake and Fire. 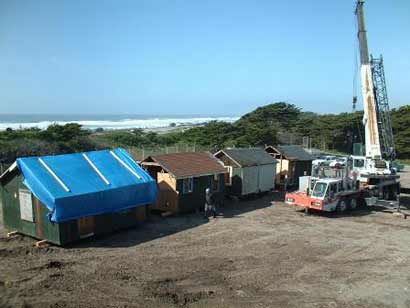 
More on the Kirkham street homes and earthquake shacks in Streetwise!