A Short History of Lake Merced

Lake Merced was originally inhabited by the Ohlone Indians, who fished the lake and plied the nearby Pacific for fish, seal and the occasional beached whale.

A Short History of Lake Merced 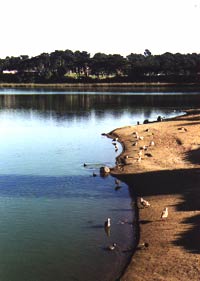 (Originally published in Streamkeepers Log, the quarterly newsletter of California Trout, Summer 2004. We thank Tony and CalTrout for allowing us to republish the article here!)

Lake Merced was originally inhabited by the Ohlone Indians, who fished the lake and plied the nearby Pacific for fish, seal and the occasional beached whale. The Spanish arrived in 1774, scouted the area as a possible mission site and named it The Lake of Our Lady of Mercy which later became the corrupted Spanish/English "Merced."

The Mexican government granted the land around the lake to Jose Galindo who, two years later in 1837, sold it for 100 cattle and $25 to the first elected mayor of San Francisco (then a small village known as Yerba Buena), Francisco de Haro. Tragically, de Haro's twin sons were shot and killed by Kit Carson during the Mexican-American War. A despondent de Haro spent the remaining years of his life rambling around his hacienda on the southern end of the lake before his death in 1849.

Because of its remoteness from the rest of the city, Lake Merced was a popular dueling ground in the 1850's and the site of one of the best known duels in the Old West. The duel, between U.S. Senator David Broderick and Chief Justice of the California Supreme Court David Terry (both Democrats), capped a bitter, personal feud between the two powerful politicians and ended in the Senator's death.

The Spring Valley Water Company (SVWC), formed by some of the West's biggest plutocrats to meet the demands of burgeoning San Francisco's water needs, purchased the lake's water rights for $150,000 in 1868 and cemented a near monopoly on the San Francisco market. Over the next 30 years, the city sued the SVWC several times over rates and free water for firefighting. Frustrated, the city began searching elsewhere for its own, city-controlled source. The search led to the Yosemite Valley where Hetch-Hetchy Dam was built---which San Francisco controls to this day. 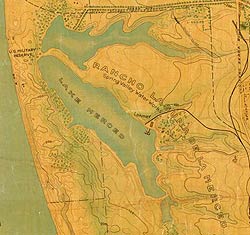 With the value of its Lake Merced property greatly diminished, SVWC began selling off parts of it between 1890 and the 1920's. In time, these parcels became golf courses, housing tracts, the San Francisco Zoo, Stern Grove, San Francisco State University and the Laguna Merced Military Reservation.

In 1917, the Reservation was renamed Fort Funston, after the commander of the army who patrolled the streets after the 1906 earthquake. Fort Funston was de-activated after World War I and re-activated in 1936 as world hostilities flared. During World War II, the army installed mortar and five-inch guns along the lake's shores, bought 150 acres from the SVWC and expanded the fort. After the war, Fort Funston was declared surplus and given to the City of San Francisco.

In the 50's, the state Public Utilities Commission (which had acquired the water rights) ceded jurisdiction of the surface of the lake to the San Francisco Recreation and Parks Department on condition that it: 1) supply potable water to consumers in San Francisco; 2) keep the water level from dropping; 3) prohibit swimming and gasoline driven vehicles; 4) remove all sewage; and 5) ensure that nothing was done to make the waters unfit for human consumption. The city proceeded to create a first-class urban fishery as well as other recreational and municipal facilities.

Development of the area around the lake, however, was not without cost. Extensive pumping of the Westside Aquifer by the golf courses, municipalities and cemeteries developed in the post-War years lowered water levels. As the levels dropped, fish stocking, which at one point numbered 250,000, all but ceased. The Boat House, once a thriving restaurant and bar, closed and fishing piers were left overlooking the tules that choked the banks.

Today, the lake is on the rebound thanks to the work of CalTrout, the Lake Merced Task Force, the Friends of Lake Merced, and others. Water levels are up. CalTrout has installed a new fishing pier and the Department of Fish and Game has plans to plant 50,000 fish this year. While there is still much to do, the future is beginning to look a little brighter for the colorful lake on the southern edge of San Francisco.

More on the Broderick-Terry Duel in Streetwise