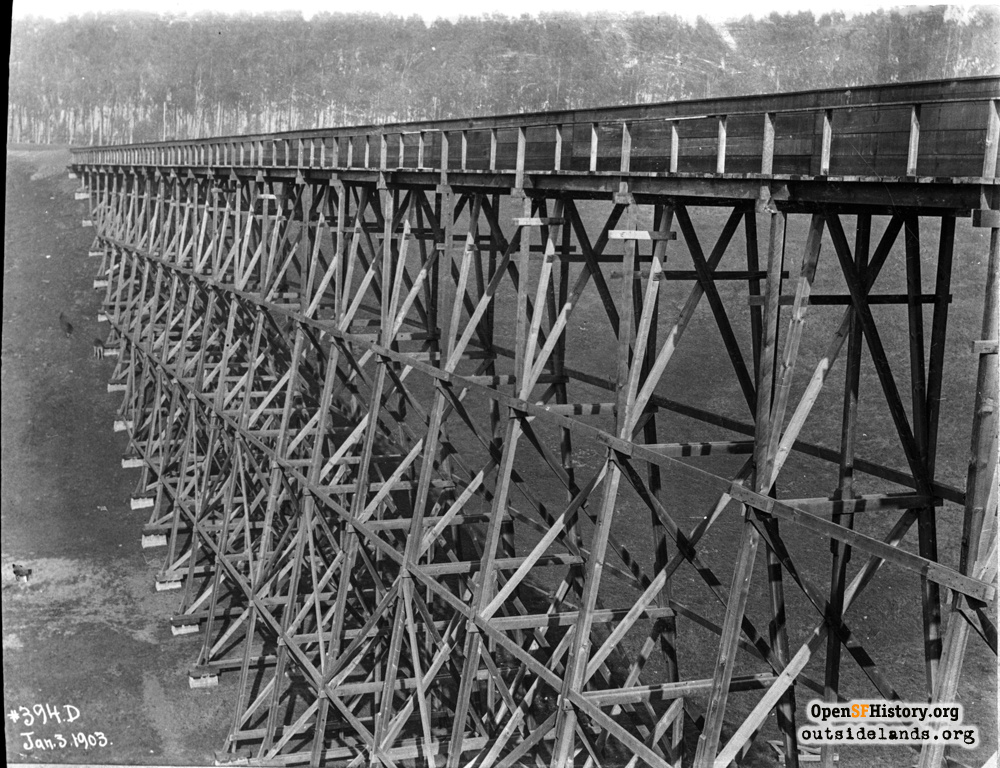 by Woody LaBounty
(Published in Outside Lands magazine with support from the Schwemm Family Foundation.)

Since the 1850s, Lake Merced and the land around it have been the site of roadhouses, a famous duel, truck farms, and large scale "city within a city" housing developments. Located in the southwestern corner of the City and County of San Francisco, the lake has been used as a source for the city's water supply and for recreational activities from skeet shooting to golf to dragon boat racing. Despite encroaching urbanization, watershed changes, fragmentation, and aquifer reduction during the twentieth century, the lake remains a unique habitat supporting riparian, dune scrub, and woodland forest natural communities. Read part one and part two.

The Search for Water

From its beginning, San Francisco was a thirsty town. Finding and transporting water for drinking, industrial uses, and fire-fighting was a paramount requirement for growth and prosperity, and it obsessed early city leaders. Private companies provided fresh water by tapping Spring, Lobos and Islais Creeks in the city, before searching for sources farther afield.

Different corporations formed by leading capitalists made proposals to the city to sell water. Sources were identified as far away as Lake Tahoe. Grandiose proposals were periodically published to construct aqueducts, pipelines, dams, and reservoirs to deliver and store water.

By 1865, Spring Valley Water Works emerged as the winner of the local water wars and became the monopoly supplier to the city. In 1868, to ensure its place of prominence, and with an eye on the city’s growing needs, the company purchased the water rights for Lake Merced. In the 1870s, Spring Valley began buying up the land around the lake, eventually owning almost 3,000 acres of watershed. 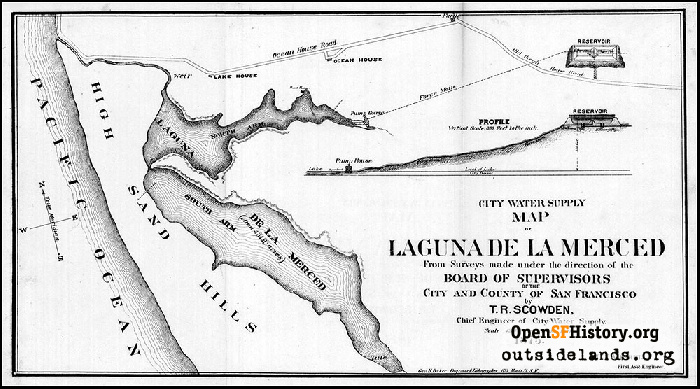 Map as part of a proposal from the City Engineer's department to tap Lake Merced as a fresh water supply. Spring Valley Water Works, which had been buying up the water rights and surrounding land, won the bid the following year., 1875 - G. F. Allardt

Lake Merced fulfilled part of the supply Spring Valley delivered into city pipes. Mixed with water delivered from the company’s Pilarcitos, San Andreas, and Crystal Springs reservoirs in San Mateo County, the lake water had to be pumped by generators up to the Laguna Honda reservoir. Spring Valley in the mid-1860s had drained and lined a natural lakebed in the hills to create the reservoir. It could hold 32 million gallons of water and its elevation allowed gravity to deliver water, and create water pressure, for taps east of Mount Sutro and Twin Peaks.

Despite these measures, use of Lake Merced water in the city supply had to be reduced in the 1890s because of water quality problems caused by algae blooms. Spring Valley Water introduced carp to the lake in hopes the fish would feed on the algae. But carp, as bottom feeders, roiled the dirt, vegetation, and sediment from the lakebed, muddying the water. After trying to eradicate the carp with nets and hooks, and considering explosive black powder, Spring Valley resorted to bringing in fourteen sea lions to eat the carp in 1891.

“Our seals [...] are destroying them by the thousands,” Charles Webb Howard, president of the company, said, “and we hope to have them thinned out very appreciably in a short time.”1

The sea lions did prey on the carp, but preferred to take one large bite of each fish’s midsection, leaving carp carcasses to contaminate the lake. The bloody bodies also attracted sea gulls and their dropping and rendering of the carp bits further fouled the water. Finally, 100,000 predatory muskellunge fry—“voracious and depredating fish”—were shipped by special train car from New York State to finish off the carp.2 By 1896, the lake was found to be essentially fish free (even of muskellunge), the sea lions were removed, and pumping for the city’s water supply was increased.

(Listen to the Outside Lands San Francisco Podcast episode on the Sea Lions at Lake Merced.)

The infrastructure to draft water from the lake required not only pipes, pumps, diversion canals, culverts, dams, and bridges, but also powerhouses, employee residences, bunk houses, stables, chicken coops, sheds, wells, and coal bins. A railroad spur from the Southern Pacific’s San Francisco-San Jose steam train line was laid to deliver supplies including coal and oil to operate the pumps.

On the north side of the lake, pumps were installed and in operation by October 1, 1877. These early pumps could send 3.5 million gallons of water a day east through 16,000 feet of iron pipe to meet with the pipeline from the peninsula, and continue on to storage at the College Hill reservoir south of Bernal Heights.3

Later Spring Valley pumping stations can still be seen today and are still in operation for city water. City Pumps, located just west of where Brotherhood Way meets Lake Merced Boulevard on the east side of South Lake, was built by the company in 1891. City Pumps drew water from the lake itself and boosted water delivered from the San Andreas reservoir in San Mateo County. It still draws water from the now municipally-operated peninsula reservoirs to send to basins around the city, and has recently become part of a new plan to mix groundwater with sources from outside San Francisco to supplement the drinking supply. 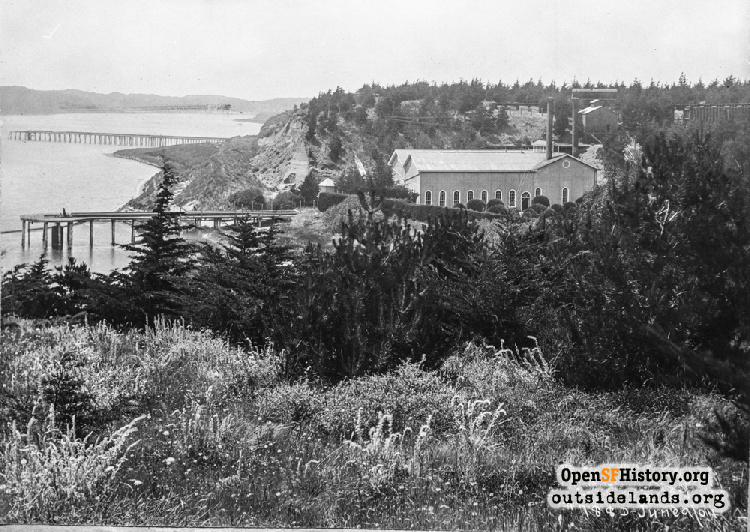 On February 17, 1912, the Central Pumps along Sloat Boulevard at 22nd Avenue began operations. Enclosed in a classical “water temple” building designed by architect Willis Polk, the Central Pumps were the company’s most powerful, able to deliver eight million gallons of water daily from the peninsula up to Laguna Honda. The building still stands today in front of the Merced Manor reservoir with stylized dolphins, goddesses, tridents, and water-themed epigraphs as decoration.

By the 1910s, Spring Valley Water Company was the largest privately-owned public utility water company in the United States. A monopoly held by the leading capitalists of the era, with a stranglehold on a required resource for the West Coast’s major city, and an equally tight grip on state politics, the Spring Valley Water Company was an unpopular entity to reformers, progressives, and the editorial staffs of newspapers. The city itself often was in lawsuits with the company and vowed to tap pipes by force when the company threatened to cut off water. (San Francisco was often behind on paying its bill.)

Outlying neighborhoods complained about the service, or lack of same, frequently, and residents in new areas of development from Ocean Beach to the Ingleside had to use their own wells before the company felt there were enough customers to make an investment in pipes worthwhile.

In the face of this growing resentment, a new city charter in 1899 laid the groundwork to create a municipal water system. Intensified criticism of the company as unprepared to adequately protect the city came after the disaster of 1906, when fire wiped out most of the city after a major earthquake. The company's line from Pilarcitos was damaged by the quake, severely limiting efforts to fight the fires.

In addition to immediate questions of emergency preparedness, water quality was often suspect, and a special governmental committee after the earthquake reported that San Franciscans were at higher risk from water- borne diseases than normal.

In fits and starts, the City of San Francisco looked for water beyond the company’s control. Two years after the 1906 earthquake and fire, the city passed a bond proposal to buy water rights from the Sierra Nevada mountains. With help from the federal government in the form of the Raker Act, passed by the United States Congress in 1913, the city was able to transform the Hetch Hetchy Valley near Yosemite into a municipally-owned reservoir. With millions from a 1910 bond issue, the city began building infrastructure to deliver the water to San Francisco.

The Spring Valley Water Company could see the writing on the wall during these years. It agreed to an initial $38 million purchase price in 1921, and granted the city a twelve year option to exercise such a deal.

During the 1920s, an awkward partnership between the city and Spring Valley integrated and connected the Hetch Hetchy project with Spring Valley’s lines. New reservoirs and conduits were created to serve a rapidly growing city—all while waiting to see if arrangements for the company’s purchase could be finalized. Bond measures in 1910, 1915, and 1921 all failed to pass.

Much of the land around Lake Merced wasn’t under option for purchase in Spring Valley’s agreement with San Francisco. The U.S. Army already owned the Fort Funston site. The company began selling land it had formerly leased for truck farms and golf links. The Olympic Club, Lake Merced Gold Club, and San Francisco Golf Club all secured their courses, and developers began taking options on some of the cultivated fields.

In the early 1920s, the City of San Francisco leased, with an option to purchase, land at Ocean Beach for the six-million-gallon Fleishhacker Pool and what is today the San Francisco Zoo. In 1923, another 170 acres between the north and south arms of Lake Merced were leased for the city-run Harding Park golf course.

In the midst of lawsuits, lobbying, and compromises with city and state authorities, Spring Valley worked to improve its image. A cheerful magazine named San Francisco Water, published by the company from 1922 to 1930, highlighted not only company work, but California history and poetry. Equestrian trails and historical markers were installed around Lake Merced for public recreation and education. 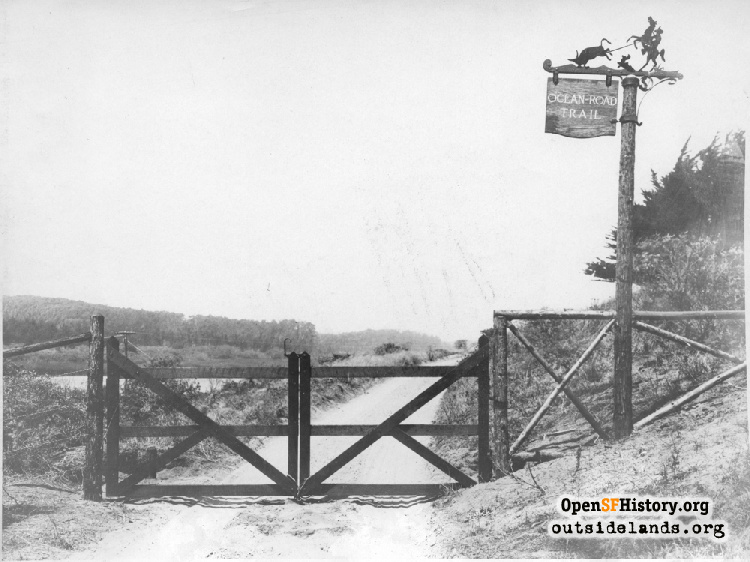 Finally, after a series of failed bond measures, the voters of San Francisco approved a measure to purchase the Spring Valley Water Company in 1928.

The city took over the system on March 2, 1930 at a formal ceremony held at City Hall. The city treasurer handed the president of Spring Valley Water Company, S. P. Eastman, a check for $39,962,606.51. In exchange, the city received a deed to 62,500 acres of watershed, 28,000 acres of river water rights, reservoirs in multiple counties, and miles of tunnels, flumes, aqueducts, and pipes. Immediately, 454 Spring Valley employees became civil servants of San Francisco.4 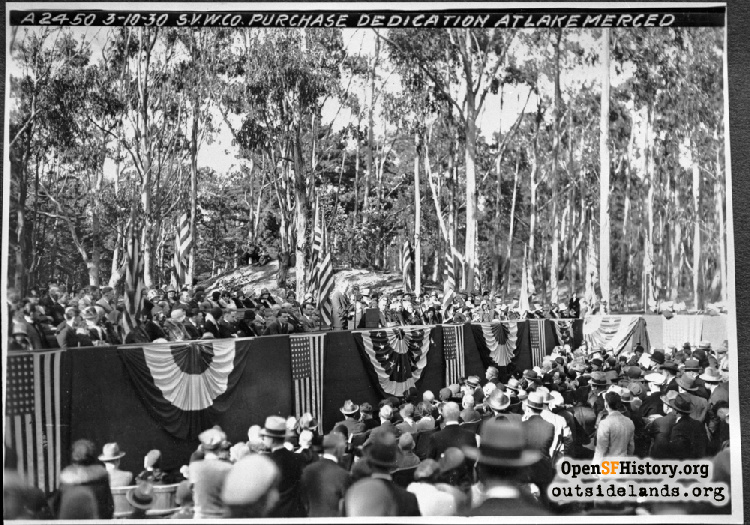 An even grander dedication ceremony was held on the shores of Lake Merced on March 9, 1930, with lots of patriotic bunting, a speech by the mayor, and a walk around new public lands that had previously been fenced off.

The City of San Francisco now had ownership and control of the largest lake in city limits. Plans for its use as a public utility and a public park had already begun.

This project was made possible with support from the Schwemm Family Foundation.