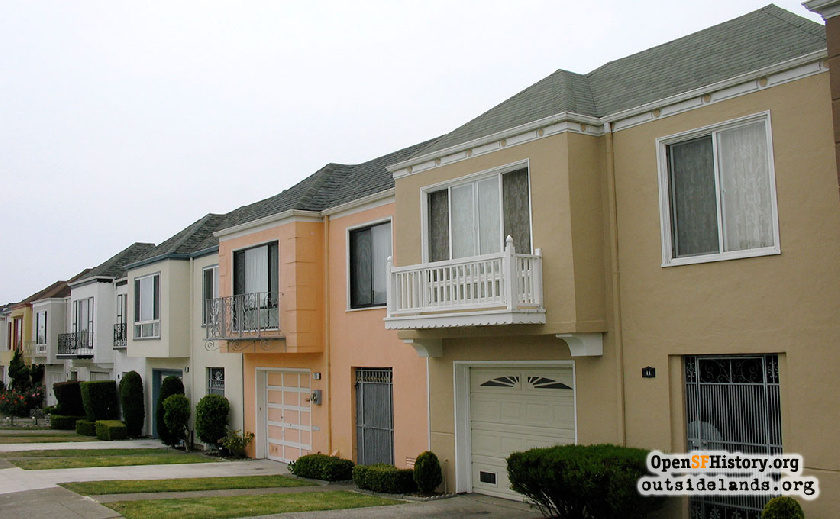 South of Sloat Boulevard, built by the Gellert Brothers in the 1940s and 1950s.

The Gellert Brothers and Lakeshore Park

Brothers Carl and Fred Gellert established the Standard Building Company in 1922, acting as small-scale contractors for single-family houses and duplexes. Carl Gellert acted as president of the firm, while Fred Gellert was in charge of construction activities. Neither brother had more than an eighth grade education, but both apprenticed in the building industry and took evening classes to learn architectural drawing. As their company grew with the real estate boom of the 1920s, the Gellerts made sure to diversify the business by not only building and selling individual homes, but also contracting as a construction firm for homes, markets, and apartment buildings.1

In 1932, the Standard Building Company built its first full subdivision on Ardenwood Way off Sloat Boulevard, with twenty-four Tudor Revival residences. "Ardenwood," built in the depths of the Depression, sold slowly and the brothers went back to a business model that featured efficiency and speed over architectural detailing and variety. Standard Building Company joined other merchant builders such as Henry Doelger, Chris McKeon, and Ray Galli in aggressively developing the Sunset District with affordable row houses built in assembly-line fashion.

Spurred by low-interest Federal Housing Administration (FHA) loans, these home-building companies took on whole blocks of sand dunes, racing each other to build and sell as quickly as possible. In 1940 and 1941, on the eve of the United States' entry in World War II, San Francisco's merchant builders experienced record years for sales and houses built. The Standard Building Company's 1940 sales doubled those of the year before, with the firm building and selling 357 houses in twelve months.2

In 1939, Standard Building Company created the "Sunstream Homes" brand name as a designation specifically for single-family row houses in the Sunset District priced less than $6,000. The company copyrighted the name, and within a year had increased sales by 45%.3 The Sunstream brand grew beyond this original low-price use, and was employed by the company into the 1970s.

Standard Building further attempted to separate itself from competitors with creative marketing ideas, having Sunstream homes play a prominent role in a local radio drama, and creating a staff of service trucks on call to offer free repairs of small problems in customers' homes during the first years of residency.4

In 1939 and 1940, the Standard Building Company built over 240 houses in the Pine Lake Park subdivision. Originally platted and lightly developed by the Parkside Realty Company in the late 1920s, Pine Lake Park curled around the southern edge of Stern Grove north of Sloat Boulevard. In 1939, the Gellerts purchased the farmland south of the boulevard from the Spring Valley Water Company for a new subdivision. 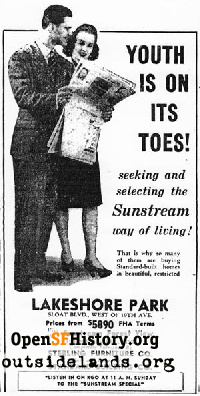 Buying a Standard Building house was advertised in print and on the radio as a lifestyle choice. The Gellert brothers marketed Sunstream houses as affordable first homes for young couples. - San Francisco Chronicle, February 2, 1941

Confident from rising sales and an improving economy, Standard Building Company moved away from its practice of marketing new homes to low-income buyers and advertised that "Lakeshore Park" would be a "de luxe subdivision"5 with restrictive covenants usually found in high-end residential parks.

The declaration of restrictions attached to every Lakeshore Park lot permitted only single-family residences; banned commercial trades and businesses; set a minimum market value price for buildings constructed ($3,500 for one-story house, $4,500 for two-story); and required that "no persons other than those wholly of the Caucasian race" shall use, occupy or reside in Lakeshore Park. Servants and domestic help of other races were allowed.6

Taking aim at higher-income buyers, the Gellerts initially planned to build fully detached homes in Lakeshore Park. The first buildings, on the east side of Inverness Drive south of Sloat Boulevard, followed this pattern, but the desire to maximize the land value apparently won out, and the blocks built before World War II followed the Sunstream row house model.7 With FHA terms, a Lakeshore Park home could be bought for as low as $5,890,8 just a little more than a typical Sunset house.

Rather than continuing the numbered avenues of the Sunset grid, as the Fernando Nelson company had done with the Merced Manor subdivision to the east, Standard Building platted Lakeshore Park with nature-inspired street names: Sylvan, Middlefield, Forest View, Riverton, Springfield. The work crews moved east to west, constructing one block of houses at a time with an open model home each block or two as the crews progressed. 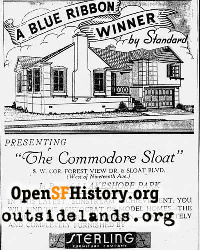 Standard Building Company announced that 53% of Lakeshore Park had been sold as of late January 1941.9 That month proved to be Standard's highest-grossing to date, with 66 new homes sold for a total of $330,000.10

In August 1941, Standard was building on Meadowbrook Drive.11 By February 1942, the company had reached the west side of Middlefield, and down select blocks to Eucalyptus: over 200 houses constructed in five months, or more than a house a day.

The United States' entry into World War II halted the Standard Building Company's prolific work, as materials and labor were redirected away from residential developments and into defense work. The company issued a "last call" for home buyers in March 1942. Advertisements and work on Lakeshore Park stopped soon after. During the war, the company built military housing and facilities across California.

Standard Building Company After the War

In 1947 Standard returned to residential construction and Lakeshore Park homes began to reflect post-war architectural trends with detached split-levels, ranch-styles, and double garages. The price of a new home more than doubled after the war, with returning servicemen able to buy homes with little or no money down. Sunstream homes, which sold for less than $6,000 in 1939, went for $12,000 ten years later.12 In the early 1950s Lakeshore Park was completely built-out, and Standard Building Company created a small shopping center, Lakeshore Plaza, on the west side of the development.

In 1948, the United States Supreme Court banned the use of race in deed restrictions and covenants.13 Despite the law, the Standard Building Company faced repeated accusations that they would not sell or even show houses to African-Americans.

In 1961, future San Francisco mayor Willie Brown conducted what he described as the city's first "sit-in demonstration" at one of the company's Forest Knolls houses.14

Standard Building Company sales people repeatedly vacated an "open house" when they saw potential African-American buyers approaching. Brown and friends responded by entering the empty house and waiting for the agents to return over a number of days.

The protest gained media attention and progressed to picketing of the Forest Knolls development and the Standard Building Company's headquarters on 19th Avenue. A Standard spokesperson told local newspapers that "we have not sold in the past to Negroes and the question of selling to Negroes in the future is still under advisement."15

With pressure from the mayor and civic groups, Standard eventually promised to stop discriminatory practices.

Pickets returned in 1966 when the company was accused by the State Fair Employment Practices Commission of a conscious, deliberate "whites-only" policy in its new Serramonte development in Daly City.16 Again, after, pressure from San Francisco's mayor and Human Rights Commission, among others, the company pledged to change its practices.17

The Standard Building Company continued constructing Sunstream Homes throughout the Bay Area into the 1970s, but the energies of the Gellert brothers moved into the creation and operation of charitable foundations until their deaths in 1974 and 1978.

7. By building wall-to-wall in the style of row houses, Standard could add four houses more to a block side.