Location: Sloat Boulevard on the north, between Junipero Serra Boulevard and 19th Avenue on the east, west, and south where the two large streets merge near the San Francisco/Daly City county line.

The plan for Lakeside was well explained in the California Homes, October 1936 issue. The short description is titled "For the Man of Means":

"If you are a San Francisco executive or professional man, you'll like Lakeside. Close to your executive offices both in the matter of distance and the matter of time due to the Twin Peaks Tunnel; close to your favorite golf course and bridge club; close to your heart in the architecture of your needs, Lakeside is appealing. [...] Realized at Lakeside is the modern idea of placing all public utilities underground. No unsightly poles or electric wires will mar the view or endanger life or property." 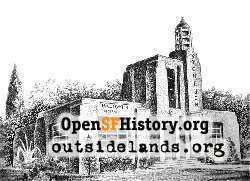 "The advanced ideas that will characterize Lakeside are indicated by this modernistic tract office." - California Homes, October 1936

Advertisements for Lakeside featured the signature white picket fences that "enhance the exclusive, old fashioned charm of beautifully designed homes." The quaintness of the fences was offset by the price range of $9,000 to 15,000---high for a country still fighting its way out of the Great Depression and on the eve of entering World War II. Developers Ellis and Henry Stoneson built even more expensive Lakeside homes for themselves. When Henry's $60,000 "mansion" at 100 Stonecrest Drive was completed in 1941, the Stonesons featured it in ads and newspaper articles. Architect Harold G. Stoner designed many of the early Lakeside homes.

The Lakeside sales office stood at 1 Sloat Boulevard on the corner of Junipero Serra Boulevard. The "modernistic" Mayan-temple-meets-lighthouse design called out to thousands of passing streetcar riders. 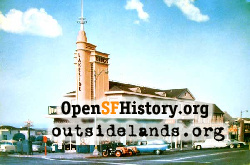 The sales office is gone, but the signature building of Lakeside Village still stands. 2501 Ocean Avenue welcomes shoppers to the commercial strip the Stonesons created to go with their "Aristocrat of Home Developments." Now the building is devoted to medical offices, but this "rocket-ship colonial" structure used to house Bowerman's Drugs at street level.

Manor Market also used to feature a tower atop its building before it become a Walgreens. Cameron-Jones, the realty company next door which sold many of the first Lakeside homes, just closed their doors in September 2006. But Portal Travel has been operating at 2609 Ocean Avenue since the 1940s, and Villa d'Este, under other names, has been operating as a neighborhood dinner house just as long.

When land west of Lakeside was purchased for a state university campus the Stonesons' began advertising their most recent Lakeside subdivision as "College City."