The Larraburu Brothers were famous for their San Francisco sourdough bread. 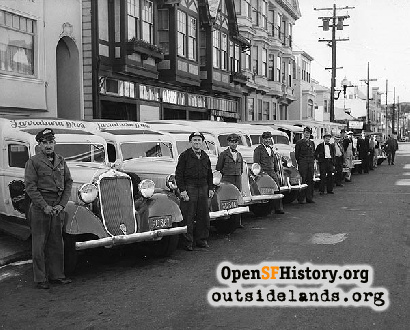 Larraburu Brothers vans and drivers on 3rd Avenue near Clement Street, about 1940., 1940 -

Above is another beauty from John Freeman's collection: the delivery trucks and drivers of Larraburu Brothers Bakery on 3rd Avenue between Geary and Clement around 1940. Like salty fog air and the waft of coffee from the Hills Brothers building, Larraburu bread provided one of the great "Smells of San Francisco."

The director Alfred Hitchcock was said to be a regular visitor to the Richmond District just for the famed sourdough bread. Linda Hayton provided a sensory memory of it on our Web site message board:

"My dad and I would get up early and head down for a loaf hot out of the oven. I can still smell it. We would drive down to the beach and sit on the sand eating while the sun came up. I remember how nice that hot bread felt in my hands. Talk about comfort food!"

A photo of the delivery vans is a sadly appropriate way to remember the Larraburu story. When one of the company trucks tragically struck a child, an ensuing lawsuit revealed that the company was woefully under-insured. Both the insurer and Larraburu went bankrupt in the late 1970s.

Parisian, another Gold Rush-era baker, closed its doors in 2007, and the selection of amazing sourdough bread options in the City of San Francisco just isn't what it used to be.