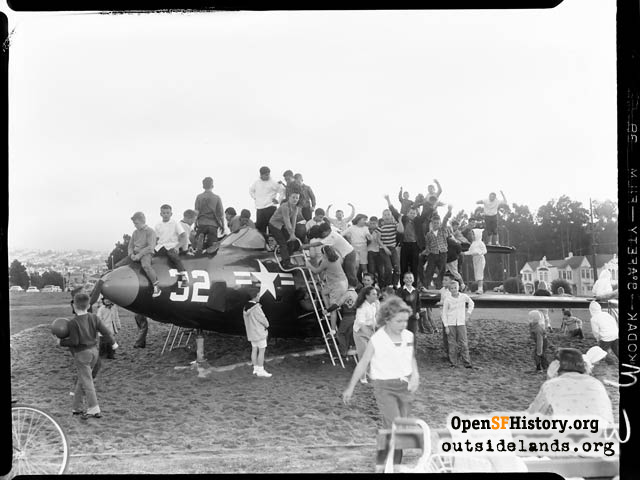 The Jets of Larsen Park

Remembering the Navy jets used as play structures in a park on 19th Avenue.

The Jets of Larsen Park 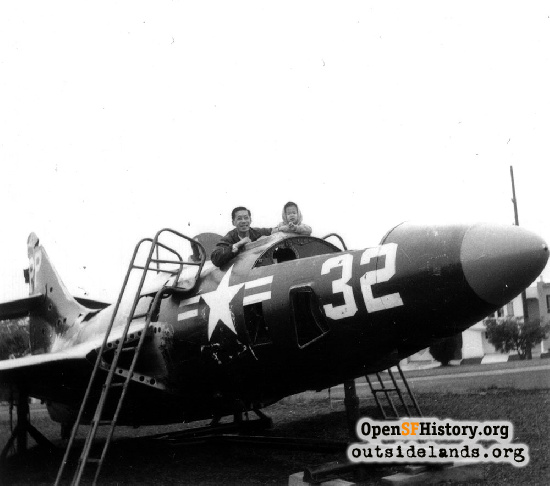 Richard Lim and son in first Navy jet in Larsen Park., circa 1966 -

We always kept alert in the back seat. A drive to Stonestown or Serramonte or down the Peninsula for some family holiday event would mean a glimpse of the jet on 19th Avenue and Vicente Street. My brother and I would beg our parents to please, please, please stop for a minute, so we could climb on it, crawl through it, slide along its wings, pretend to be pilots a hundred miles high.

From 1959 to 1993, Larsen Park hosted three different retired Navy jets, each donated to serve as imaginative play structures for the children of the Parkside District. The first was a Grumman F-9 Cougar reconnaissance plane from Squadron VC-61, driven up from Moffett Field in Mountain View with the cooperation of the California Highway Patrol and all the police department jurisdictions in between. The second jet, a Navy F-J Fury, replaced the Grumman in 1967. Both jets had ladders added to help kids climb into the cockpits. The third, and perhaps best-remembered jet, as it occupied the park for eighteen years from 1975 to 1993, was an F-8 Crusader. A Marine helicopter dropped the plane in the San Francisco Zoo parking lot at Ocean Beach, and from there it was hauled up Sloat Boulevard to Larsen Park. Rather than being propped up like the previous jets, the F-8 sat flush on the grass, with a slide added to its side, and its jet intake tube making for a great crawling tunnel. The F-8 was “my” plane.

Of course the planes belonged to everyone. As with any playground site, many memories from a impressionable time of life were made there. Bob Martin, who grew up on the 2400 block of 15th Avenue, left his succinct account on the WNP message boards in 2003: "I remember the plane very well. Played on it a lot in my youth. Tore plenty pairs of jeans on it also. Kissed my first girl friend there also. Even slept inside of it."

(Bob wasn't the only one who slept in the plane, as another poster on the message board admitted: "I remember some guys would actually spend the night there after a long weekend, say at the 'Portals' bar on West Portal.")

Sitting right at 19th Avenue with a broad expanse of grass around it, the jet received a lot of exposure as thousands of automobiles on California Highway 1 passed it daily. Children from all over the Bay Area knew "the plane park," and it acted as a touchstone for the neighborhood, a local landmark. "I live out in the Parkside. You know, where the plane is on 19th Avenue?" 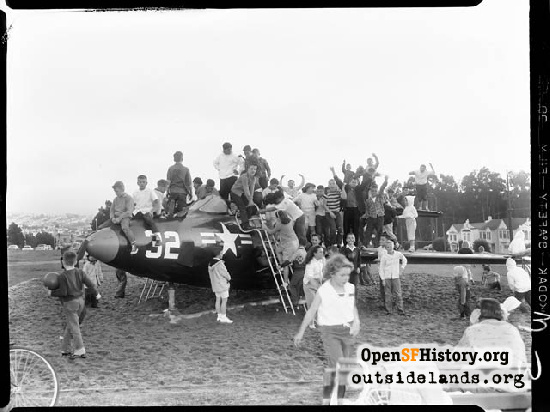 By the early 1990s, the last jet had become not a representation of play and imagination, but of urban decay. A target for vandalism—some politically-motivated just after the Vietnam War, but most in the genre of "bored teenager"—the plane became known for graffiti, broken bottles, and rusty, sharp edges. The old F-8 settled so low in the turf it appeared to be attempting a self-burial. With lead-paint abatement and general restoration estimated at between $30,000 and $40,000, I think the City of San Francisco breathed a big sigh of relief when the Pacific Coast Air Museum took the F-8 away to Santa Rosa in 1993. (Today, the jet is restored and on display.)

For many years after the jet's removal local children had to make do with an unimaginative basic playground across the street from the jet site. The slides, swings, and wood climbing structure deteriorated, and each was removed from use until neighborhood kids practically had nothing but sand. Walking home from West Portal Elementary School with my daughter, we would often stop for a quick spin on one of the last pieces, a small wobbly metal merry-go-round. A victim of the neighborhood's ravenous fog, its rusty condition had me thinking a lot about tetanus shots. How much worse could an old Navy jet be? 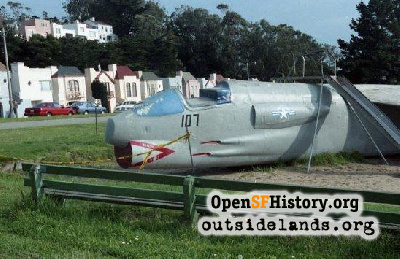 When Larsen Park's Charlie Sava pool underwent renovation in the early 2000s, I talked to Fiona Ma, supervisor for the district, about bringing a jet back. By the time Carmen Chu had assumed the office, opportunity and some money had aligned to seriously consider the idea in renovating the ever-declining playground. The supervisor made calls to the Navy, but, for good and bad, we live in a more-regulated world. The best achievable and affordable option had to be a "jet-inspired" play structure. After fundraising with soap box derbies, some grants, and a gala or two, we had a ground-breaking. Then the designer of the very cool-on-paper play structure couldn't deliver, and there was a scramble in early 2015 to get a new design and fabricator.

The long journey is now at an end. Thanks to Carmen Chu, successor supervisor Katy Tang, neighbor Nano Visser, the San Francisco Parks Alliance, staff at the Recreation and Parks Department, and local dynamo/organizer Cammy Blackstone, a new playground opened in November 2015. After twenty-two jet-less years, children again have a plane to climb on in Larsen Park.

I very much sympathize with old-timers who wish a real Navy plane could have been obtained. The supervisor’s office tried. Modern safety regulations and the prohibitive expense of taking on and remediating a real jet just made it impossible, even if the government had aircraft to give. Also, San Francisco isn’t the Navy town it once was—many people objected strongly to having an instrument of war in a public playground. More important than my nostalgia, or differences of opinion on the Armed Forces, is that children from the Parkside, Sunset, and those passing by who convince their parents to “please, please, please stop for a minute” have a place to play safely and let their imaginations soar.

Photos of the opening of the new playground on November 21, 2015! 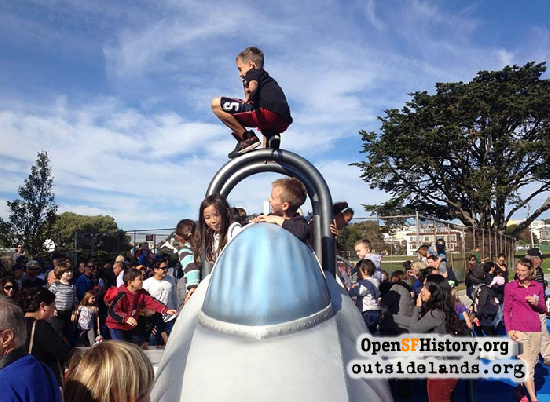 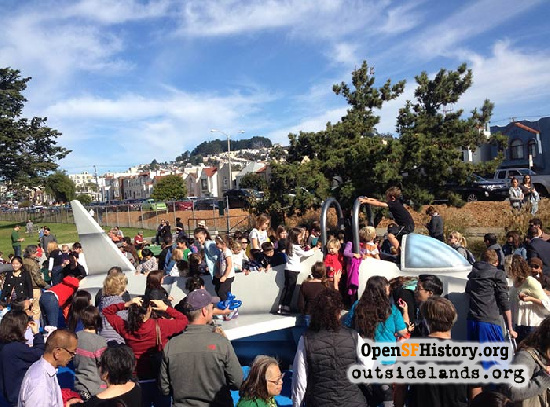 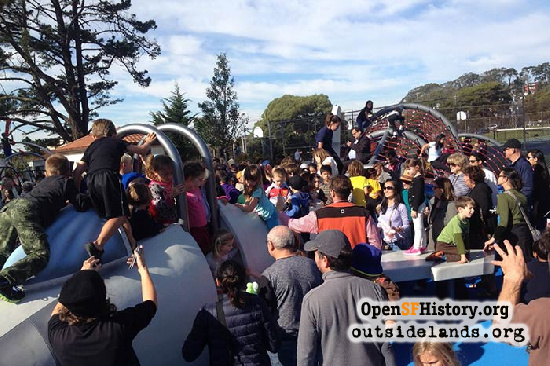