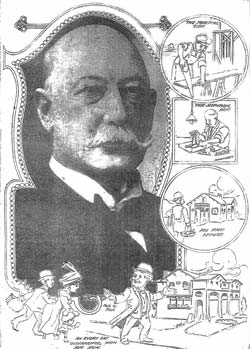 "Mr. Leonard---a kindly, gentle man, with most of his years well behind him and only a cheerful prospect before him---is a personification of a new idea in real estate activity. He gathers dollars faster than the usual man can garner them; but every silver coin that falls into the Leonard treasury is a nail in the structure of a new city..." 1 --- San Francisco Call, 1913.

Born in Texas, Leonard received his training as an architect in New York, before finding great success as a developer in the San Francisco Bay Area. 2 Leonard's obituary gave him a familiar heroic American businessman beginning: coming to California in 1883 "with nothing but a hammer and a saw." At the time of his death at the end of the Roaring Twenties, his businesses were worth over five million dollars. 3

Leonard's San Francisco and Suburban Home Building Company built the first "earthquake shack", being one of the five construction firms contracted to create cottages to house the thousands of refugees in camps. 4 But Leonard is better known for structures of a higher pedigree,like the ornate former Vedanta Society Temple, on the northwest corner of Fillmore and Filbert, one of the most striking buildings in the City.

After building hundreds of homes in Alameda and Berkeley, Leonard was one of the first to bring the "residence park" form of development to San Francisco. His first neighborhood development in San Francisco was Jordan Park (near the pioneer residence park, Presidio Terrace). Only involved with building some of the early buildings in Jordan Park before he and James Jordan dissolved their partnership, Leonard started his own project in "Richmond Heights" (two blocks from 9th to 11th Avenues, Anza to Balboa Streets) of high quality homes, with no modification of the street grid but some wider lot sizes.

Then the old Ingleside Racetrack property gave Leonard a blank slate to create Ingleside Terraces---a community of curving avenues, irregular lot dimensions, ornamental objects, pillars, and landscaping. Leonard placed restrictions on his homes' minimum cost, their usage (no businesses), yard sizes, and even who could buy them (no minorities allowed).

Leonard did more than just plop houses down in Ingleside Terraces. Working in a mostly rural setting in a major urban center, he worked with other local developers to create true neighborhoods in western San Francisco. He put in his own water mains when the City wouldn't, designed churches for his new home buyers to worship at, and fought to create improved transportation to the area. Eventually he and his fellow property owners got the Twin Peaks Tunnel they had lobbied for, but not until after agreeing to direct assessments in the district and practically starting the digging themselves.

Leonard's first residence in Ingleside Terraces is now a City landmark, and it was in another one of his homes there---344 Moncada Way---that he died in 1929. 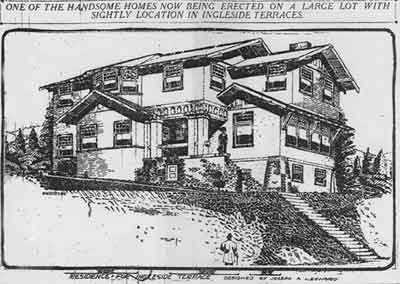