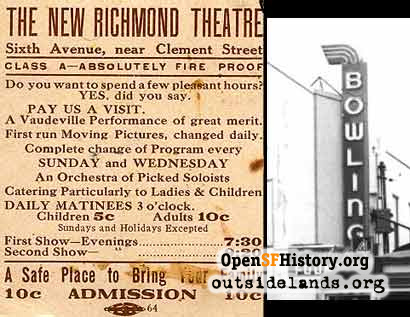 Jack Tillmany, our resident movie house historian, sent us a postcard promoting the old Linocln Theater, then called the "New Richmond". The Lincoln did business on 6th Avenue between Clement Street and Geary Boulevard until 1940, when it became Lincoln Bowl.

The postmark on the card was May 1911, and comes from the collection of Lowell Angell, Theatre Historical Society. Thanks to Lowell and Jack!

The bowling alley had a good run, lasting until the 1970s. The close-up of the sign above is from a 1948 photograph.

Jack is still in search of a photo of the Lincoln when it was a theater. If you have one in your attic, scrapbook or basement, let us know!