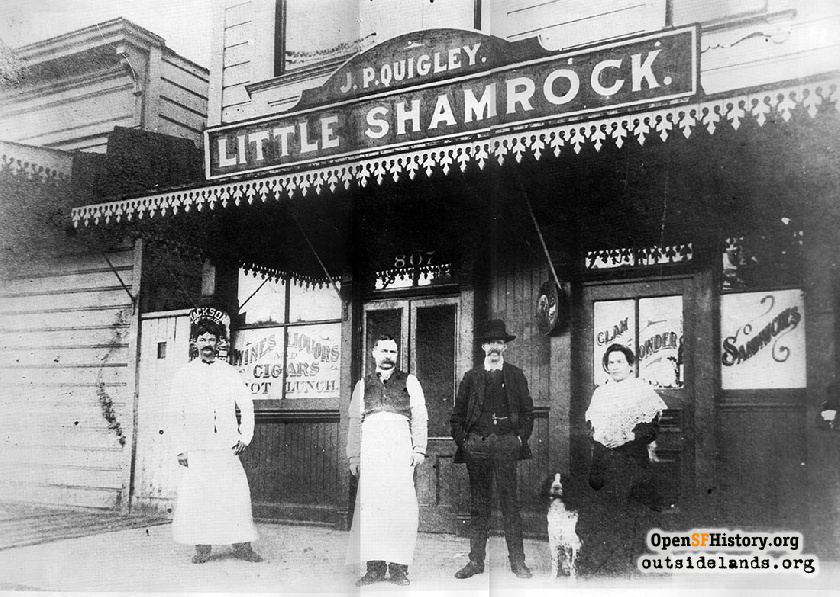 The Sunset District's oldest business, and possibly one of the oldest bars in San Francisco. 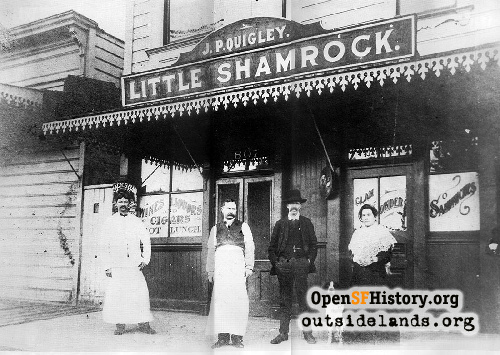 "The Little Shamrock" at 807 Lincoln Way near Ninth Avenue is the Sunset District's oldest business, serving drinks in the same location since the 1890s. The story goes that Antone Herzo and his wife opened their pub on October 28, 1893, to serve the thirsty workmen who were creating the Midwinter Fair in Golden Gate Park. The bar recognized this date in a centennial celebration in 1993.1

But a bit of research pokes some holes in the official story. (Thanks to John Freeman for his intrepid research.)

First problem: Antone Herzo died July 17, 1893 at age 38, which is quite an impediment to opening a bar three months later.2 Antone owned a bar at 5th and Brannan Streets, and in 1892 moved his young family out to the healthy air of the Richmond District and opened a bar on the northwest corner of 7th and D Street (they would soon change the name to Fulton Street sometime between 1894 and 1895). They lived upstairs above the corner saloon.

After Antone dies, perhaps because of heavy competition (in this Beertown area there were 13 establishments selling liquor in 1893 in the four blocks between 5th and 9th Avenues, C and D Streets), his widow Julia opens a new saloon on 5th Avenue across from the old Bay District Race Track grandstand. The address given was 733 Fifth Avenue. The Richmond Banner made mention of the business October 6, 1894:


A LITTLE SHAMROCK
The shamrock, whenever found, is the delight of every Irishman's heart. The word itself is a magic one to every offspring of Erin; in fact, it appeals to all people who have a tender chord in their make-up. The Shamrock refreshment place of Herzo & Co., located on Fifth avenue, opposite the racetrack, is popular, not from the name only, but that the proprietors provide with a generous hand good things to cheer the inner man. Mrs. Herzo is an adept in the art of pleasing, and with the assistance of her daughters makes good cheer for the patrons of the house. When in the neighborhood, give the Shamrock a visit.

Julie remarried a man named Quigley and eventually ran three west side bars, including The Little Shamrock on Lincoln Way. Her son Antone Jr. (Tony) took over after her death in 1929.

Other inconsistencies require more research (such as how the Little Shamrock survived Prohibition), but the later years of the venerable bar's official history from a flyer commemorating its centennial sound fairly accurate:

"Tony Herzo Jr. eventually took over the business and married his sweetheart Charlotte, and had a son and daughter. He treated his customers well and always had a big kettle of spanish beans at the window by the front door.

"Beer and shots were the standard drinks and even though he could make them, Tony tried to discourage folks from ordering the fancy ones. This became a tradition. Times were difficult during the prohibition years but there were many speakeasys throughout the city. Many of these went under the guise of cigars stores or harmless eating establishments. People who grew up in San Francisco tended not to notice these not-quite-legal activities and no one was the worse off for it; and try telling an Irishman of that time there was no whiskey.

"Tony got a lot of business over the years from the sports enthusiasts at Big Rec in Golden Gate Park, just a couple of blocks away. Professional baseball teams would be thirsty after a day's game and he would always have cold beer and free food ready. Tony said that the Little Shamrock was a man's bar, that not one in fifty wore a skirt. Until World War Two that was a true statement in that before then women were not often seen in bars, but instead went to cocktail lounges or hotels. After the war, many more women frequented bars and nowadays Tony's words are true more because women in the Sunset tend to wear jeans and slacks. There have always been more men than women at the Shamrock and sports have always played a vital part in its social interaction. 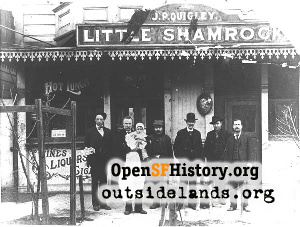 "When the 49ers played in Kezar Stadium there were always problems finding parking spaces for the games. People would park in the surrounding neighborhoods and often on their way back to their cars they would stop by the Little Shamrock for a drink. Over the years many famous sports figures also stopped by the pub. Hacksaw Reynolds was in one year to promote a volleyball tournament. It is a favorite spot for international rugby teams who have become well known for their wild antics while drinking beer in the place. Regulars have learned to leave as soon as they hear the ruggers are coming, in order to avoid the noise, the crowding and whatever else might ensue.

"Before Tony Herzo Jr. sold the Little Shamrock to Enda Barkley in 1969, his famous bean pot, which he never washed, was always ready for the athletes from the park. The thick crust on that pot only enhanced the flavor of the food.

"In the 1960s Tony was getting on in years, and he had bartenders to serve his customers drinks; however, he would come down stairs from his home above the Shamrock every two hours on the dot. He would down a shot and then go back upstairs. Tony died in September of 1970, taking with him decades of memories of the Little Shamrock.

"Enda Barkley owned the business for about a decade. He was a serious and quiet man, but being a good Irishman he tolerated a fair amount of silly drunkenness from his customers. Every night at closing time his patience would end and he would let out a loud "all right you bunch of bloody lushes... Last call for alcohol - it's motel time!" 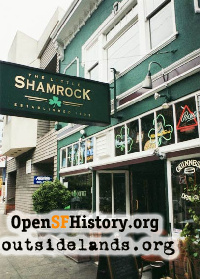 "June 16, 1974 Enda sold the Little Shamrock to Saeed Ghazi (the day his son Taymoor was born) and his partner Jeff, who also owned Zhivago's on Clement Street. In 1982 Jeff moved to Hawaii and sold his half to Saeed. Saeed has kept the history and old memories strong with all the old pictures of the Herzo family and others on the walls as well as mementos of the neighborhood and San Francisco."

Walter Ballin shares some personal memories of Enda and the Little Shamrock (emailed to us January 2010):


"I must mention that two Democratic clubs held their meetings at The Little Shamrock, the Franck R. Havenner Democratic Club and the Yerba Buena Democratic Club. When Enda announced at closing time "All right you bunch of bloody lushes... Last call for alcohol - it's motel time," he also said "Get the hell out of here!" Sometimes after having a few pints of Guinness, I would go behind the bar and imitate him and he sprayed me with the water from the hose that he used for mixing drinks. I do remember him rightfully throwing some people out when they got too drunk and boisterous. He would say "Get the hell out of here. Get out! Get out!" He gave them a hostile glare, as they were going out the door. At the time I worked at a fabric store and I remember thinking how I wanted to be able to throw out customers who were rude."

Julie Lane forwarded her father's memories of the Shamrock. H.A. Lane went to school with the grandson of Tony Herzo, Sr., also called Tony. Julie think the Tony Sr. below is actually the middle Tony. And the "Tony Jr." below is the grandson, or Tony the Third, born circa 1921. Got that?


"Don't ask me why Tony Herzo, Sr. would name his bar The Little Shamrock. Maybe Mrs. Herzo was Irish. I went to school with Tony Jr., but never asked him about it. There were lots of Irishmen and Italians who frequented The Shamrock.

"I think Tony Sr. used the Little Shamrock as a speakeasy during Prohibition. I suspect that because there was a hidden room at the rear of the store-front establishment. I know about it because Tony Jr. used to let us hold our club meetings there when we were in grade school.

"Tony Sr. was often behind the bar, but he had a couple of men who helped out. The place was old. And not only was that evident from the furnishings, but you knew as soon as you opened the front door and saw The Clock. It was a grandfather's clock which had a sign on the front of it reading 'NO TICK SINCE APRIL 18, 1906.'

"The bar was along the back wall, and there were several tables with chairs over which the clock loomed. If you ordered a fancy drink at Tony's the conversation around you might stop. Most orders were 'Shot and a beer,' also known as a 'Boilermaker.' There were calls for Irish Whiskey and Irish Coffee. And there were a lot of wine drinkers, particularly red wine.

"Behind the bar, centered above the line-up of bottles, was a blown-up two-column article from the San Francisco Chronicle. The headline shouted in 48-Point type, 'THE GOOD PEA SOUP OF TONY HERZO.' The article underneath could not be read from a bar stool, but the fact the reproduction was there made it obvious Tony was pleased at the review.

"Another item that was served at Tony's was beans. And although there was no sign behind the bar about the beans, that entrée was more popular than the 'good pea soup.' I heard Tony say that someone asked him why he charged so much more for his beans than he did for his soup. 'I told him there was a bottle of Chianti in every other pot of beans,' Tony winked. 'And the rest of the pots get a quart of Irish Whiskey.'

"Tony was a story teller. He recited a tale more than once about Joe DiMaggio ordering Boston Baked Beans when he was in Boston to play a series against the Red Sox. The waiter reportedly expressed shock that a man from San Francisco would order beans anywhere else. 'Haven't you ever been to Tony Herzo's Little Shamrock, Mr. DiMaggio?' he inquired.

"DiMag sought out The Shamrock as soon as he came back home.

"That's according to Tony, Sr., but I'm not sure I believe it. Remember, Tony Sr. was a story teller, and you know how story tellers are."
—H. A. Lane