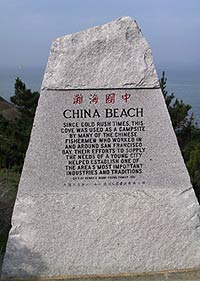 A cul-de-sac off El Camino Del Mar near 28th Avenue in San Francisco leads to a lovely stretch of publicly owned coastline. At the head of the trail down to the beach is a large trapezoidal stone marker placed by Chinese Americans in 1981:

Since Gold Rush times, this cove was used as a campsite by many of the Chinese fishermen who worked in and around San Francisco Bay. Their efforts to supply the needs of a young city helped establish one of the area's most important industries and traditions.

During most of the twentieth century, the beach was not called China Beach but Phelan Beach. 1 That's because whites expelled Chinese people from the beach and from the fishing industry in the 1890s. In 1880, California passed "An Act Relating to Fishing in the Waters of this State": "All aliens incapable of becoming electors of this state are hereby prohibited from fishing, or taking any fish, lobster, shrimps, or shell fish of any kind, for the purpose of selling, or giving to another person to sell..." Conveniently, only Chinese were aliens not eligible to vote. Courts declared the bill unconstitutional under the 14th Amendment, but the legislature continued to pass similar measures until the end of the century. California's senators got Congress to pass the Chinese Exclusion Act in 1882, which cut Chinese immigration from 39,500 in 1882 to just ten persons five years later. Meanwhile white fishermen resorted to extralegal strong-arm tactics. By 1890 only 20 percent of the fishing community were Chinese, and their numbers continued to dwindle the rest of the century.

"By 1893, riots and boycotts in San Francisco and the farming districts of California created conditions approximating civil war," according to a 1997 exhibit at the Autry Museum in Los Angeles. White thuggery forced many Chinese Americans back to Chinatowns for protection. Prejudice against Chinese Americans ran so high that San Francisco's public schools admitted African Americans to desegregated schools in 1899 and Native Americans in 1921, but kept Chinese Americans out until 1929.

That Chinese Americans would note on the landscape their success in fishing but not their exclusion from it is not surprising. While doing research for my book The Mississippi Chinese, I found that some young Chinese Mississippians knew only vaguely that whites had until recently kept them out of white public schools and other institutions. Their parents had never told them, perhaps feeling it would only disempower their children to know that dominant whites had oppressed them. Nor is this a uniquely Chinese trait: the introductory essay [to Lies Across America] "In What Ways Were We Warped?" tells how working-class white families often do not inform their children of the trials they faced. African Americans in the 1990s expressed regret to family historian Edward Ball that the survivors of slavery didn't tell their "children things they should have told them." Shame may also be a factor---a group's sense that its members must have done something to cause the powers that be to oppose them so strongly.

Some might argue to leave the China Beach marker as it is---let bygones by bygones. But all too often, all across America, historic sites emphasize only the good parts of our past. Surely historian Paul Gagnon is correct to say, "We do not need a bodyguard of lies. We can afford to present ourselves in the totality of our acts." Rather than leaving out the bad parts, as this marker does, hoping that anti-Chinese sentiments will never recur, San Franciscans could engage in a civic dialogue to formally declare the beach China Beach. Thus they would dishonor rather than continue to honor the anti-Chinese sentiments exemplified in Mayor Phelan's career. 2


Thanks to James Loewen for graciously allowing us to reprint this essay from his terrific book!