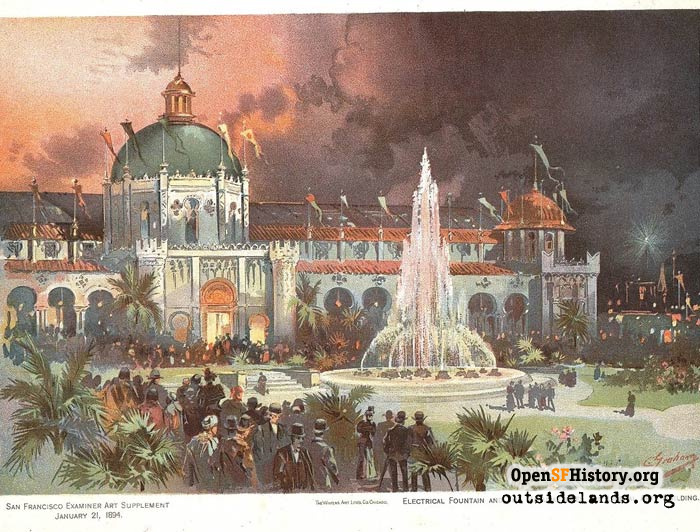 Manufactures and Liberal Arts Building at the 1894 Midwinter Fair

Manufactures and Liberal Arts Building at the 1894 Midwinter Fair

The site of the largest building at the California Midwinter International Exposition of 1894—indeed, the largest structure in the whole state at the time—is today mostly trees and open space on the east side of Golden Gate Park’s Music Concourse. The Manufactures and Liberal Arts building housed the mercantile exhibits of the exposition, where everything from buggy whips to fur coats to billiard tables were on display. 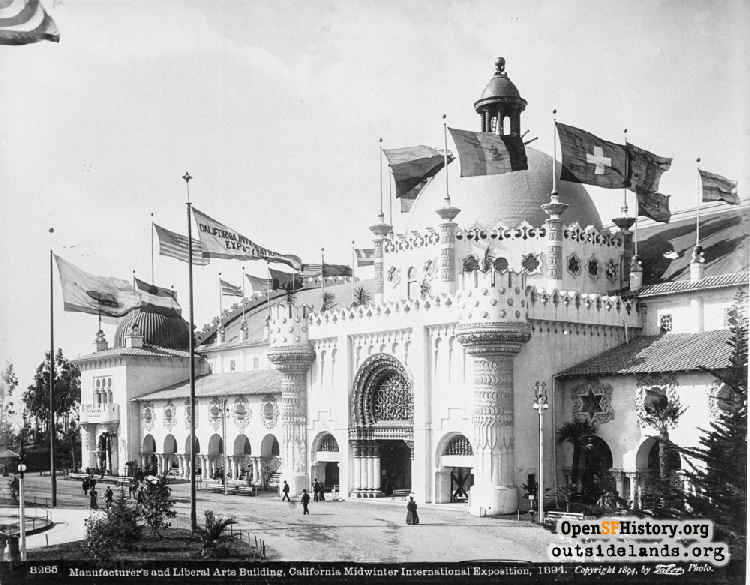 Designed by Arthur Page Brown, the crème-colored temple to commercial goods was described in the Official History as “Moorish in style, with a strong suggestion of the California Mission architecture.”1 A center dome, turquoise blue and surmounted with a golden cupola rose 130 feet above the main entry. Flying above the crenellated cornices were flags of the various nations that displayed their wares inside. Inside one of the corner towers was a set of chimes that rang out daily concerts. The 462' by 225' building had an annex that extended another sixty feet on the east, an elevated gallery encircling the main floor, and a colonnaded walkway across the front with Spanish tile on its walls. An enormous arched roof made of 14,000 square feet of glass allowed daylight to stream in, highlighting soup spoons, crystal vases, ladies fans, and other sundry imports from around the world. 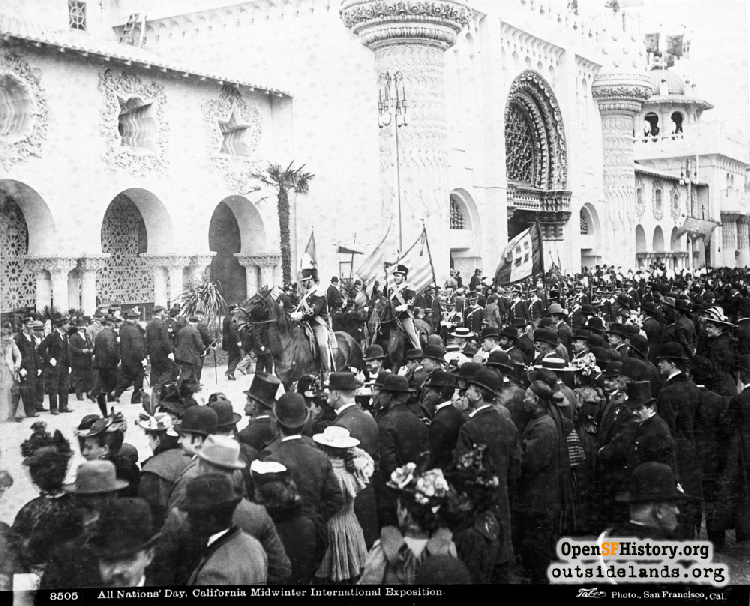 Former San Francisco mayor Frank McCoppin managed the Department of Manufactures and Liberal Arts and had to wrangle the needs and temperaments of 300 different concessionaires—most, he admitted, unhappy with their space allotment and floor location. The San Francisco Examiner called McCoppin’s duties “more complex than those of a chief magistrate of a nation.”2

The view of the main hall, which was the size of a city block, is probably best imagined in contemporary terms as a massive modern tradeshow in a big city convention center. The official exhibits of Italy, France, Germany, and Russia occupied corners of the hall’s main intersection, overseen by the statue of Athena as California, which later would top the James Lick Pioneer Monument in the Civic Center. Each country mostly recycled their exhibits from Chicago’s 1893 Columbian Exposition: imposing gateways, columns, pedestals, cabinets, and tables all surrounded, covered, and stuffed with a mind-numbing array of export goods and broken up here and there with heroic statuary and stuffed bears. 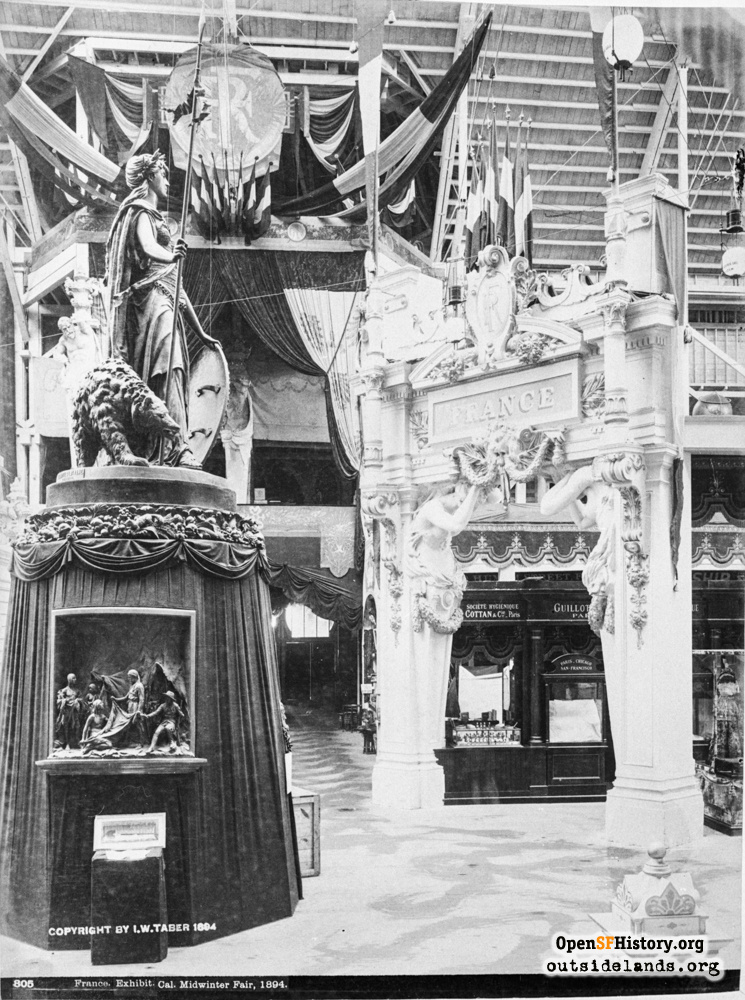 Britain, Sweden, Canada, Switzerland, Belgium, Japan, Siam, Austria-Hungary, Spain and Ceylon (today the Democratic Socialist Republic of Sri Lanka) had smaller official presentations in square footage, but managed to cram in as many samovars, decorative busts, jewelry, and wine presses as space would allow. Some of the foreign exhibits extended outside the Manufactures building to the Horticulture and/or Fine Arts buildings, or were contained entirely in their own special concession halls, such as the pagoda building run by a syndicate of local Chinese merchants. California, as the star of the exposition, was represented not only in the annex section of the Manufactures and Liberal Arts Building, but in all the other main halls and county buildings across the fair grounds, as were national and regional merchants and manufacturers from the rest of the United States. McCoppin wrote “To enumerate the great variety of exhibits made by American producers, even in the one Department of Manufactures and Liberal Arts, would be to publish a list of nearly everything that man wears, works with, or looks at for his pleasure.”3 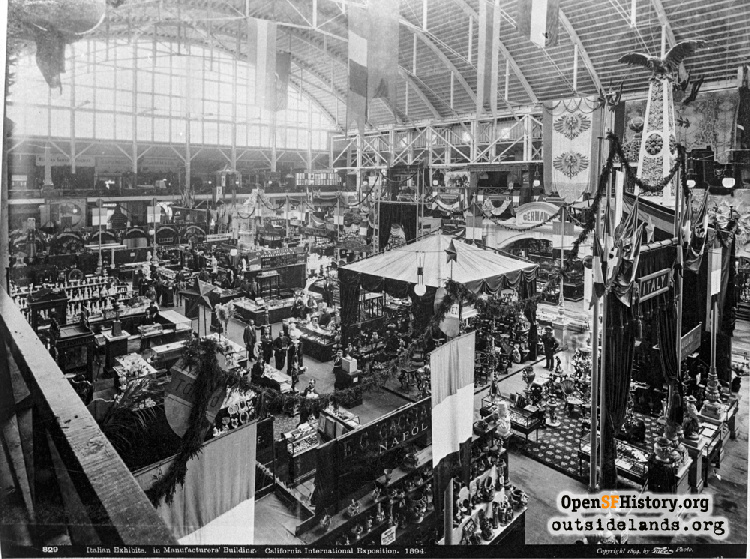 View down to the Italy exhibit in main hall of Manufactures and Liberal Arts Building at the California Midwinter International Exposition. [829 Italian Exhibits in Manufacturers Building], 1894 - Isaiah West Taber

The dynamics of hosting an international fair in 1890s San Francisco can be seen in McCoppin’s report on the Ceylon exhibit, as he lays out a reassessment of his racial prejudices after closer contact with the concessionaires: “The Orientals, although we have always considered them as the most languid of people, have really set the example in diligence at this Fair. The queer people from Ceylon have been around day and night working hard. It seemed odd at first to see a man with a back comb on the front of his head, a costume like a woman’s mother hubbard and a sash up under his arms, loaded with knives and pistols, sitting on top of a step-ladder and driving nails in scantling, but we soon got used to that and recognized that their curious dress and tortoise-shell combs did not interfere in any way with their industry.”4 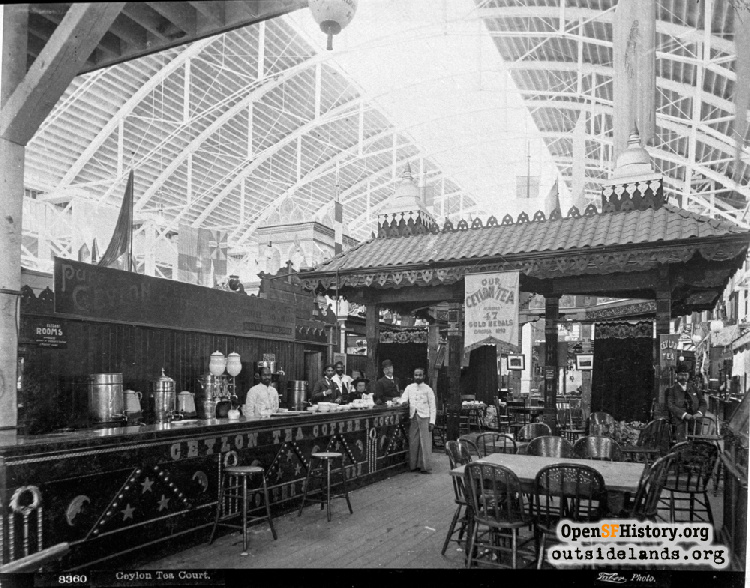 J. Rupert Foster managed the Ceylon exhibit and rather than just displaying packets and tins on tables, made the exhibit a café, which became one of the most popular places at the exposition. McCoppin noted that it “became the rendezvous of thousands of luncheon parties.” (pg 251) Foster took advantage of the reputation to open the “Ceylon Court and Tea Garden” on Market Street after the fair ended.5

In the narrower elevated galleries overlooking the main hall were displays that didn’t quite fit into the goods-for-sale category. Yale University had an exhibit all about... well, Yale. Nearby, recycled from the 1893 Columbian Exposition was an illustrated diorama of wax mannequins and taxidermied sled dogs depicting the ill-fated 1883-1884 Greely expedition to the Arctic. As part of the scene was an original “boot-leg from which the survivors had made soup during the last day of their sufferings.”6

Nickel slot machines lined the entryways and the arcaded walkway around the Manufactures and Liberal Arts building. These gambling devices had become extremely popular overall in the city, to much hand wringing by ministers and newspaper moralists. One could find them in saloons, cigar stores, newsstands, and ferryboats. At the fair, owners paid $100 a week ($2,790 in 2019 dollars) per location to put a machine in the path of the crowd. Apparently it was a good investment: “From morning to night they are surrounded by an eager throng, mostly women and children, who gamble away their spare cash, which, though only a nickel at a time, soon mounts up to well in the dollars...” Worse than the slot machines, bunko gambling games went on behind exhibits offering purported glassware “raffles.”7 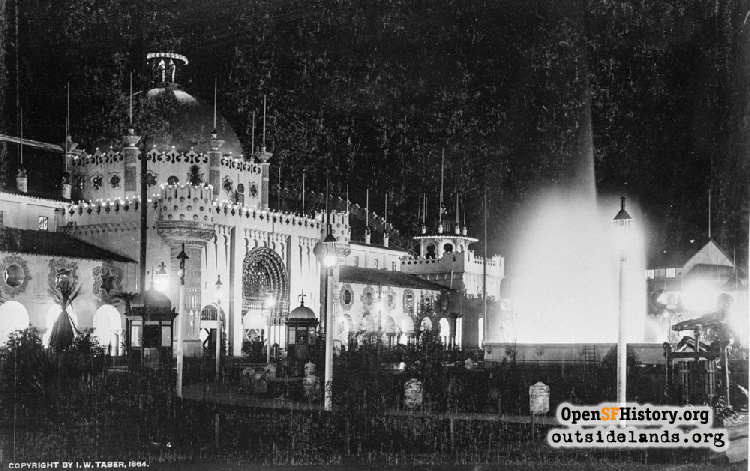 Michael de Young, Director-General and mastermind of the Midwinter Fair, really wanted the Park Commission to agree to keep the Manufactures and Liberal Arts building after the exposition ended. He argued that its capacious dimensions lent itself to possibilities such as “annual exhibits of our State horse shows; also this building might be used for general public convenience for the Park Band to play in inclement weather and as a place where great assemblages, like national conventions and others, could meet.” The idea was declined and the giant hall was sold for salvage in the fall of 1894.8 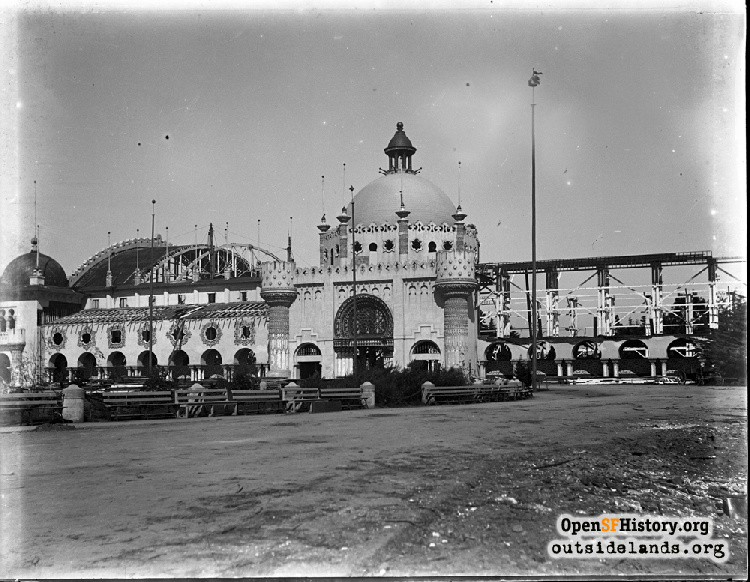