The signs are up. Pacifica Tigersharks, Daly City Titans and Redwood City's Jr. 49ers are among the many I've seen lately. Pop Warner Football and Cheer will be kicking off another season. Soon it will be time to suit up and hit the field. Yet, when I think of Pop Warner Football, I don't move down the field with the current lineup; no, I spiral back to a past season, a season when I was the young daughter of a Pop Warner Football coach.

My father, Bob Moore, along with John Shea and San Francisco Police Department's Steve Spelman assembled the first Mariners team 50 years ago in the fall of 1961. Spelman was coaching PAL's Happy Hibernian Warriors at Douglas Park while my dad and John Shea were coaching Park and Rec's flag football teams at South Sunset Park. Together, along with Sully Cassou, they created a football machine that equipped, trained and prepared a generation of young men for high school, college and even professional ball playing.

Initially they played down at 26th and Vicente and then moved to SFPD's Taraval Station whose garage served as their locker room. They practiced across the street at McCoppin Square and played their home games at Lincoln High's football field. The turnout was so great that eventually the Mariners formed two minor teams, the Mariner Mates and the Mariner Seaweeds for the younger boys.

For the next fifteen years, the Mariners contended for the top spot in the league's standings. Joe MacKenzie remarked that the 1964 Mariner team was one of the best he'd seen; he even remembered my father shouting instructions through his green and white Mariner bullhorn. In 1966, the Mariners lost the championship to the San Francisco Steelers. But in 1968, they took all the wins. According to Tom MacKenzie, assistant coach at the time, "the Mariners won the San Francisco City Championship at the Junior Bantam level. They beat the San Ramon Thunderbirds 14-0 in the Joe Lacy Memorial Bowl." As head coach, MacKenzie outfitted two strong teams in 1970 and 1971. At the year-end banquet, guest speaker 49er Charlie Krueger admired the 1971 Mariner record. 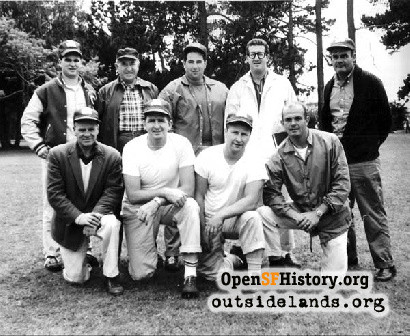 Many of the players went on to help coach the Mates and/or the Mariners. Many Mariner coaches, like John Shea and Tom MacKenzie, went on to coaching careers; but most of these men, Hank Espinal, Jack Olson, Merle Peacock, Larry Kaaha, Dick Galliani, and a host of others, were regular businessmen, construction workers and policemen. Bill Morgan and his family were folks we visited on our Sunday afternoon drives; both his sons, Jack and Craig, were Mariners.

Despite the tumultuous societal and political storms of these fifteen years, especially in San Francisco, these men quietly gave of their free time and their talent. The motto from many of the Mariners' programs was "A man never stands so tall as when he stoops to help a boy." These men stood very tall helping a generation of young men understand that the rules on the field can easily be translated to the game of life. Hard work, teamwork, respect and good sportsmanship are qualities that can be applicable in any endeavor.

By 1976, the Mariners organization had folded. The lockers were cleared out of Taraval Station's garage, and the green and white jackets and the Mariner memorabilia found their way to many Sunset District attics. As a native San Franciscan, the trinkets in my mental treasure chest include memories of the rickety bridge at Playland, ice cream at Polly Ann's, A.P. Giannini's insurmountable chain link fence, the long walk up 40th Avenue to Holy Name, and— the green and white Mariner bullhorn.

I would like to thank my dad, John Shea, Mrs. Joan Spelman, Bob Mahoney, Rob Helmstreit, Tom MacKenzie, Joe MacKenzie and Joe Hession for their contributions.