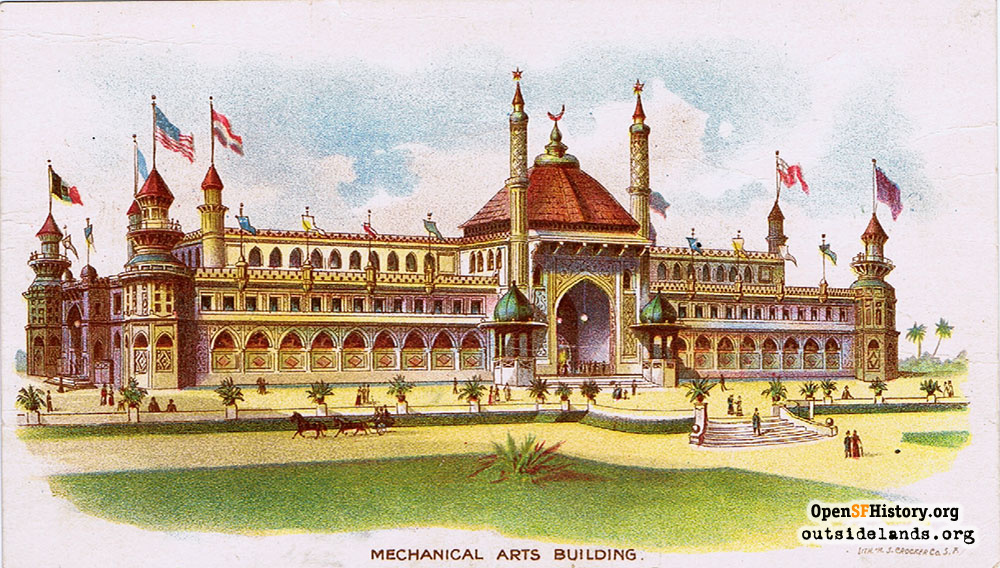 Creating the California Midwinter International Exposition of 1894 meant more than just cutting down trees and grading some sand in Golden Gate Park. Railroad tracks needed to be laid to deliver building materials. A Grand Court of Honor (today’s Music Concourse) and more than 160 structures had to be built; water and sewage service to accommodate 2.5 million visitors had to be installed; and an electrical plant to power thousands of lights had to be created in the park. Historian Angus Macfarlane has pointed out that the Midwinter Fair received the infrastructure of a small town in a mere four months, the basic services the Inner Sunset neighborhood across the road couldn’t acquire from the city in twenty years.

The Mechanical Arts Building, which stood on part of the footprint of today’s California Academy of Sciences, not only acted as one of the five main exhibition halls, but also served as the fair’s power plant. Steam boilers, engines, and dynamos inside illuminated the fair grounds and powered the pumps operating the fountains. Exhibits around the operating machinery included locomotives, mining and minting equipment, broom- and cigar-making machines, mineral exhibits, and random displays that couldn’t find a home in other fair halls, such as an arctic exploration tribute, a large relief map of the state, and a Native American ethnological collection. 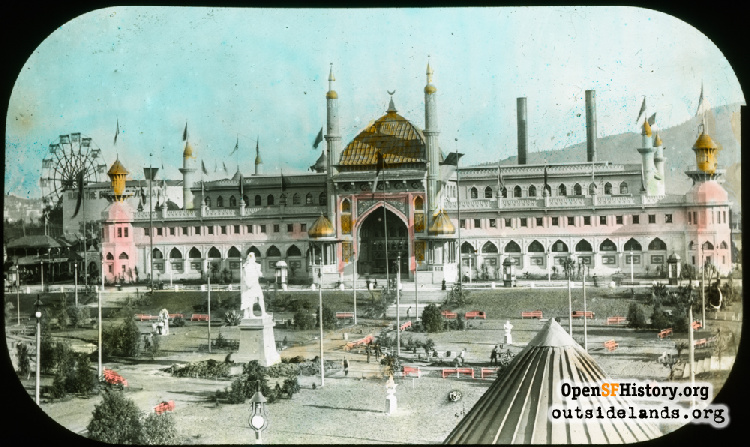 Architect Edward Swain, who would go on to design the park’s McLaren Lodge and work on the Ferry Building, won the juried competition for the Mechanical Arts Building. One of five main exposition exhibit halls, it covered more than an acre of land at 330 feet wide by 160 feet deep and cost $75,600 to construct (about $2.2 million in 2019 dollars). The official history of the fair called the building’s style “Indian,” with its richly decorated panels framing the entry and flagpoles rising from the roof’s many gilded towers and onion-domed minarets. At night, the Mechanical Arts Building was illuminated by straight rows of lights along the cornices, half-circles around the entry and collars that flashed on the towers.1 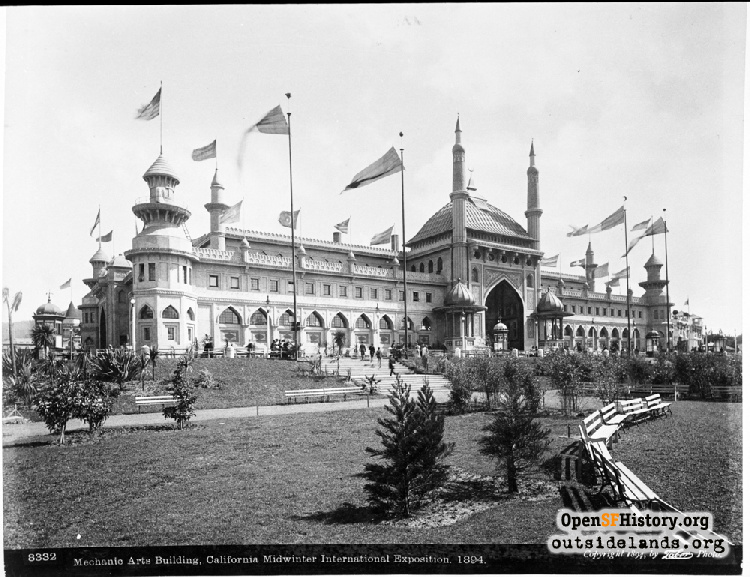 Unfortunately, Swain’s design was created without input from an engineer. While attractive from the outside, the Mechanical Arts Building was not ideal for its needs, which is why a rear annex needed to be built in the last rainy weeks before the fair’s opening. The Chief of the Electrical Department detailed all the challenges in his final report: “…the boiler annex was not sufficiently large to admit the boilers. The main building was frail, and the floor was in no way designed to stand the strain of heavy machinery. A large portion of the building having been granted to the mining display, there was not sufficient room to install the operating machinery, and the first plans for its location had to be abandoned and a new annex built for a large portion of it.”2

Added to the space and infrastructure issues of the building, the exposition organizers struggled to convince west coast manufacturers to participate in the fair by donating machinery at a reasonable price. The official history notes that as of November 15, 1893, a month and a half from the fair’s original opening date, “little or nothing had been accomplished.” On that day Lieutenant A. M. Hunt, given a leave of absence from the U.S. Navy, was appointed as Chief of the Department of Mechanic Arts. On December 7, 1893, the first foundation of the operative plant was laid.3

Some companies finally loaned engines in exchange for advertisement and publicity, while others agreed to low rental prices. Rival power companies—General Electric, Western Electric, the Fort Wayne Company, and Standard Electric—exhibited motors and generators that divvied up the power needs of the fair. The General Electric generator fed the searchlight atop the Electric Tower outside, while Western Electric’s machines powered the tower’s decorative lights. Other engines and motors provided the current for floodlights on the grounds, concession building power, and theatre lighting. 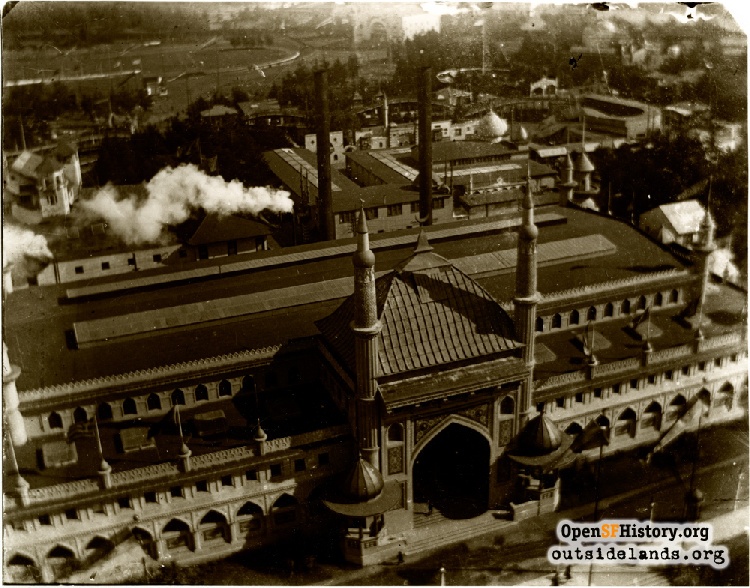 Once the fair opened, the Mechanical Arts Building’s contents underwhelmed visitors. The San Francisco Call reported that “[t]he condition of the machinery and articles for display is so unsatisfactory that few cared to linger longer than was necessary to obtain a casual view of its contents.” The San Francisco Chronicle, which had a bigger stake in the fair’s success since its publisher Michael de Young was the man who had the idea for the exposition and acted as its Director-General, assured the public in mid-February that the Mechanical Arts Building was definitely worth a close look: “The displays in the Mechanic Arts buildings are far different than what people expected them to be. To many machinery offers but little attractions, but those who enter the building find in it very much more. They will see factories and mills in operation. They will see the greatest exhibit of minerals ever made in the world. Of that they may be assured.”4

Mining-related exhibits took up the eastern half of the of the Mechanical Arts Building ground floor. Visitors entered the mining section through a sandstone arch with classical columns, bears, and a gilded globe representing California’s gold output—although the globe wasn’t completed until late February. Almost every county in California had a display and in addition to the expected gold and silver one could peruse a wide variety of minerals, salts, quartz, sandstone, soapstone, crystals, fossils, chalk, marble, clay, chrome, iron, lava rock, silicate, agate, pumice, granite, copper, asbestos, coal, lead, asphalt, limestone, cinnabar, onyx, and even petrified wood. (Butte County claimed to have petrified potato and even a petrified chicken.) 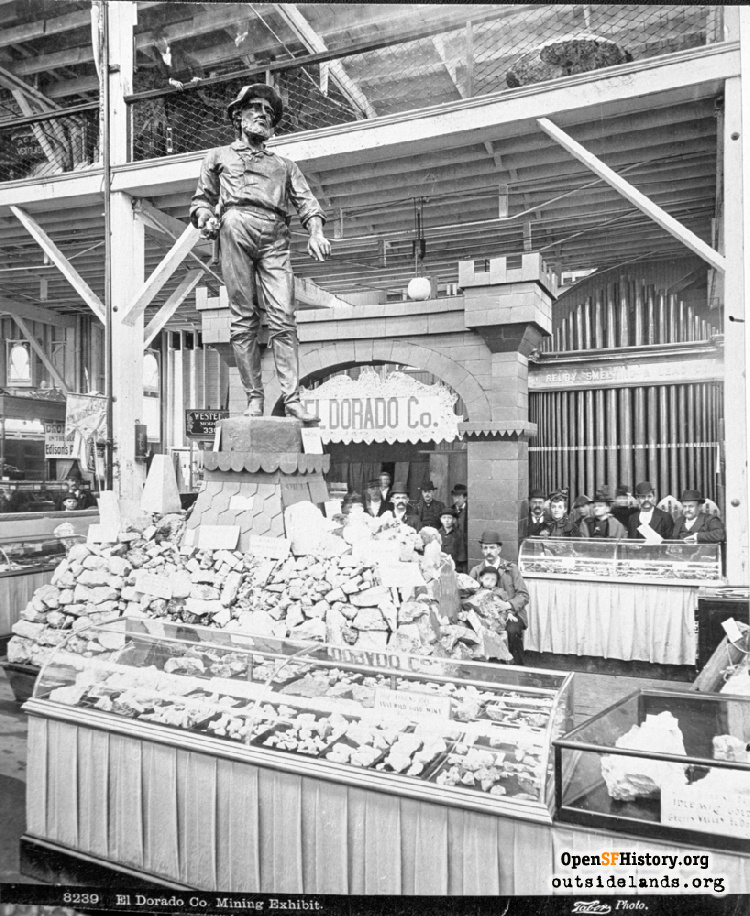 Tuolumne County’s pyramidal cabinet exhibit of gold was encased in a steel jacket each night to thwart thieves. Around the display of “gold quartz specimens, leaf gold, foliated gold, gold and telluride, gold in cement, ribbon gold” were more pedestrian shelving units with less valuable rocks, ore, and marble from the county.5

Amid the many, many rocks extracted from all over the state were miniature mining tools, models of mine timbering, mining transport cages, paintings of mines, photographs of mines, memorabilia from the gold discovery at Sutter’s Mill, and personal effects belonging to James Marshall, the man responsible for finding it. A facsimile of the statue atop Marshall’s gravesite monument in Coloma also was on display along with F. Happersberger’s bronze trio of miners, which ended up as part of the Pioneer Monument downtown. 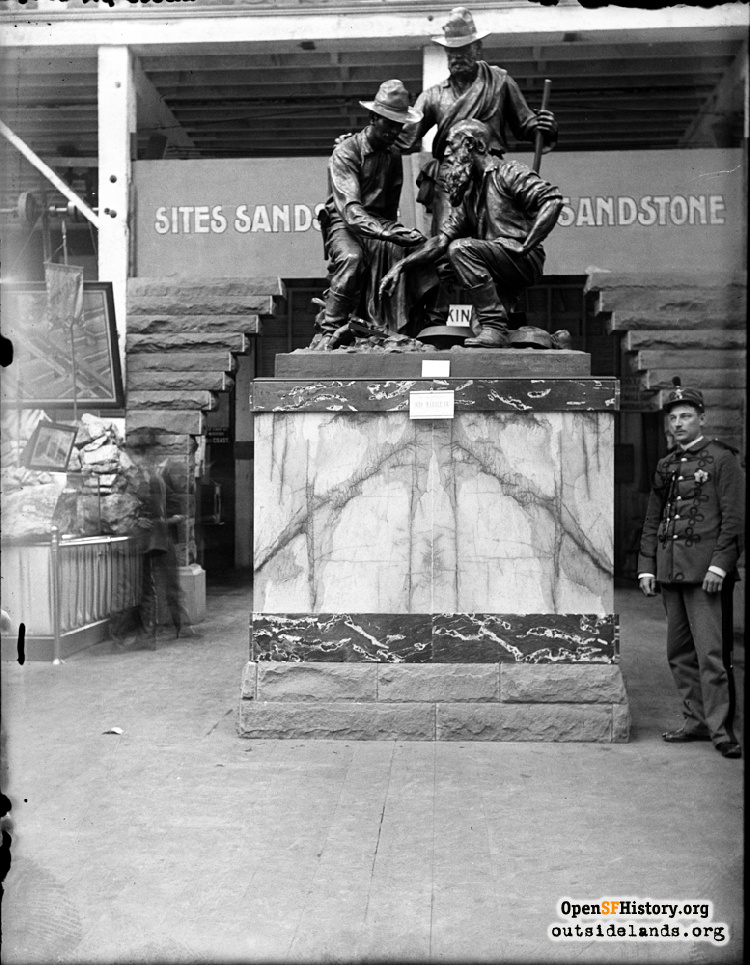 If all that wasn’t enough of a tribute to California’s mining industry, in an annex building on the west side of the Mechanical Arts Building the State Mining Association installed a working five-stamp quartz mill that crushed rock throughout the day. Observation platforms surrounded the mill and tons of rock needed to be ferried in over the fair’s six-month run. (4) At the exposition’s conclusion in July, the association ran the mill throughout the night to crush down the quartz it didn’t want to cart away.7

Other than mining, the other classes of exhibits in the Mechanical Arts Building were electrical, mechanical, transportation and what the official report called “general exhibits really not pertaining to the department.” Manufacturers laid out pumps, pipes, hydrant, siphons, brass fittings, lamps, switchboards, rock crushers, steam injectors, silk looms, stamp machines, street lamps, bicycles, carriages, and models of trains, warships, and merchant vessels. The fair’s daily newspaper was published from an onsite printing press and a working bakery put out bread and pastry comestibles. At 3:00 p.m. each day of the fair, a seven and one-half horsepower drill put holes into a block of granite “for the edification of the crowd.”8 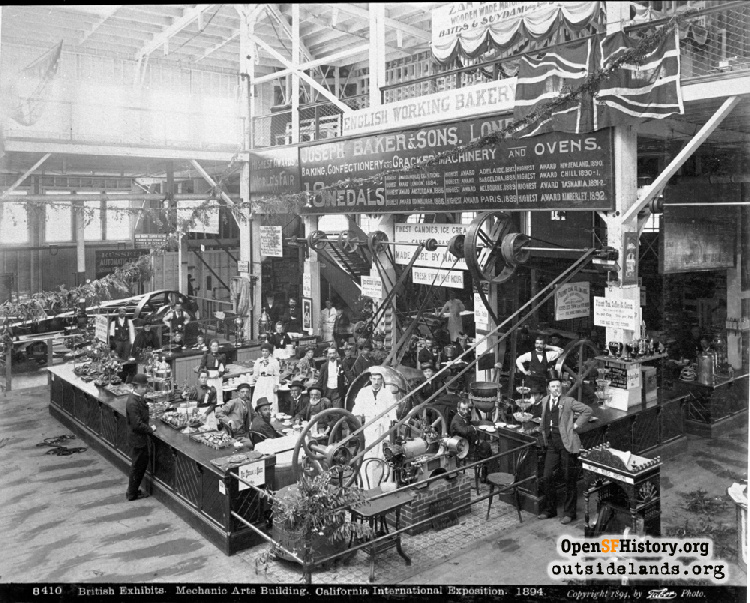 A gallery level ran completely around the inside of the building, allowing views down to all the machinery and minerals and up to the 55-foot-high ceiling. On this upper level, the State of Utah exhibited its exploitable resources mineralogical and agricultural, as well as its manufacturing bounty. Wells Fargo had a historical exhibit, which seemed to mostly consist of memorabilia from stagecoach robberies, included the valise of bandit Black Bart. The ethnological collection of Captain Newton H. Chittenden, on the west end of the gallery, displayed implements and items of dress from North American native peoples.

While the Mechanical Arts Building’s exhibits did not match the attractions of other exposition halls, its machinery worked almost to perfection. The eight massive boilers worked flawlessly inside their hastily built rear annex. Two six-thousand-gallon tanks buried in the ground behind the annex delivered 691,041 gallons of oil to the engines over the course of the fair. In the annex were also the pumps that controlled the Electric Fountain in the Grand Court. When the light display was presented each night, a controller in one tower of the Mechanical Arts Building directed the manipulation of lighting effects to his comrades below. The water was reused, captured by a canal that delivered it to a receiving tank next to the annex. 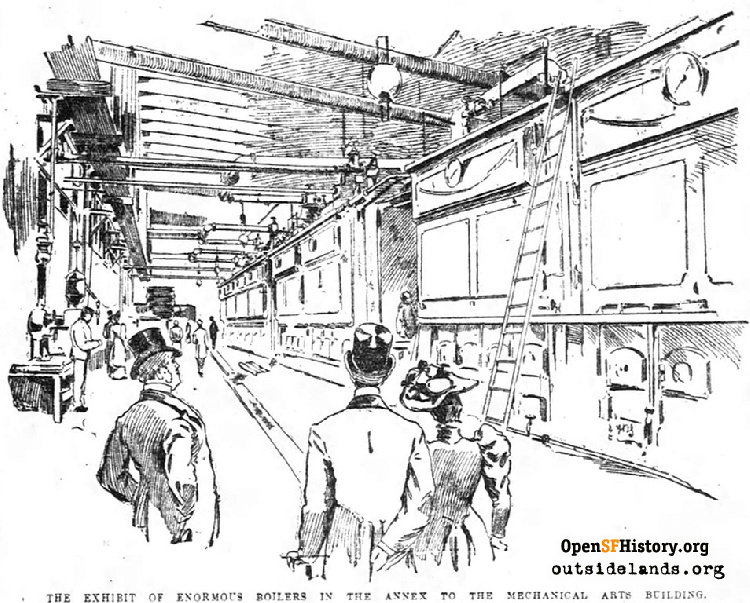 A sketch of the boilers in the annex of the Mechanical Arts Building at the Midwinter Fair. February 14, 1894 - San Francisco Chronicle

The chief of the Department of Mechanic Arts, Lieutenant A. M. Hunt, was an engineer and not a booster. In his official report at the fair’s end he bemoaned and regretted much. He didn’t pull punches on the building’s design (“illy adapted for the purposes intended”), his paltry budget (“resulting in much of the work being done in a temporary manner, and not in a way consistent with the best principles of engineering design”), and the quality of some of the exhibits (”very meager…little worth mentioning”). Yet, where it counted—infrastructure reliably serving the fair’s needs—the department and the building fulfilled its purpose in a rushed and trying environment. Only one man was injured in the construction and operation of the Mechanical Arts Building and its machinery.9 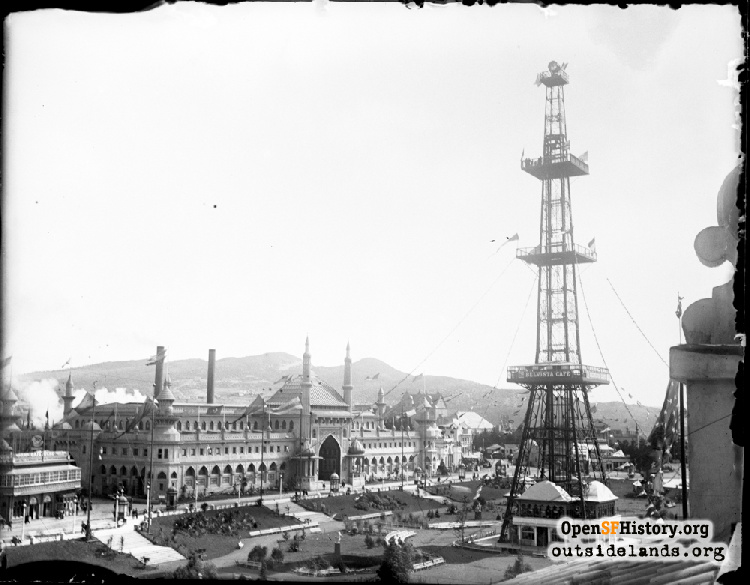