Tom O'Toole remembers the day he was the luckiest kid in San Francisco.

Willie Mays: What A Short Great Trip It Was! 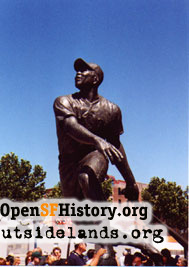 My Mom dropped us off at the main entrance to the stadium. "Remember to save some of that money for the bus and streetcar home!" (15 cents) There we were, my best friend Kent Eagleson and I, part of the excited throng going to another Giants game. I was a very fortunate fellow for many reasons; one of which was my Aunt Christine had the good sense to say "yes" when Charlie Graham, Jr. asked her to marry him. (Charlie Jr. was the son of the late Charlie Graham, former owner of the San Francisco Seals.) Several years later, that yes made my two brothers and I beneficiaries of the Graham's first base box on most weekends. And due to that great "off-the-field grand slam," Kent and I were headed inside to the center of the universe - Seals Stadium and "our" first base box.

Late in the game the Dodgers had only one out and a runner on third. A long fly ball hit to deep left center was caught by Mays, running toward the infield. Apparently, the Dodger on third must have thought no way could Mays get him at home from way out there. To make a long throw short, that's exactly what happened! The ball arrived at home in the catcher's mitt inches above the plate, and milliseconds prior to the runner's arrival. It seemed to take the ump longer to say "Yer out!" than it took Mays to deliver the strike to the catcher (whom, I think, could have been Hobie Landrith). It truly was another "Mays moment," never to be forgotten by the 40,000-plus fortunate enough to have witnessed it; not the least of whom were two 7th graders in the first base box with smiles as big as Seal Stadium itself. What a day!

After everyone in the stadium calmed down, Kent casually said, "After the game let's ask Willie for a ride home!" The man in front of me almost wore my half-chewed hot dog. "What? Willie? Willie Mays? We can't ask Mays for a ride home! We're just a couple of kids! Where do we find him? What if he says no?" Games ends. Eagleson says, "Come on!"

Minutes later, Kent and I are outside the Giants locker room witnessing something we've never been privileged to see before—a 1959 press interview. We're standing behind a group of men who are also waiting for the players to exit. These guys happen to be reporters. As a Giants player leaves the locker room, questions would be thrown at him. If he did a quick interview the reporter would hand the player a carton of cigarettes. We saw Daryl Spencer, Felipe Alou, Leon Wagner, Jimmy Davenport, "Sad" Sam Jones, Jose Pagan, Willie Kirkland and others answer reporters' questions. Where in the heck is Mays? Finally someone shouts, "Over here Willie!" My heart is pounding like a kettle drum, eyes wide open, searching any space between these massive men of the press to get a sight of Mays. Darn! Its not Willie! Well, yes it is Willie. However, it's the wrong Willie! It's the new guy McCovey. Darn! A minute ago we saw Willie Kirkland walk out of the locker room, now Willie McCovey. We're running out of Willies!

Mays, all of a sudden, appears out of nowhere, and I do mean all of a sudden. One second he wasn't there and the very next second he's there, just like his ball at home plate. He is immediately surrounded by every reporter in San Francisco. My heart is blasting, my voice in high C, as I try to tell Eagleson, "Don't let him out of your sight!" Lasers had yet to be perfected but Eagleson was already "locked-on" to Mays. As great as Mays was, he was not going to get away from Eagleson. (Kent was about 5'5", I was a lot closer to 5'2".) The reporters who had engulfed Mays seemed to be at least 10 feet tall. Finally, Willie Mays just strolls away from the reporters. I remember he's not carrying any cigarettes. We approach Willie and Eagleson makes his move. "Mr. Mays we live out by you! May we have a ride home?" Eagleson is confident and cool. I'm a mess. "Sure. What's your name?"

"I'm Kent Eagleson and this is Tommy O'Toole." We shook hands. I know I can talk. Heck, I've been talking Eagleson's ear off the entire game. But now... nothing. If I am able to say anything it's going to come out sounding like a chipmunk. Best to say nothing. Let Eagleson handle the details.

As the three of us walk away from the dark green walls of the stadium to Willie's car, fans either stare in disbelief at Mays or say things like, "Great game Willie!" "Great throw out there!" Mays acknowledges everyone with a heads up nod, a smile, sometimes both. No one approaches for an autograph. No one is brothering him except maybe the two 7th graders who are getting into his pink Thunderbird. Eagleson is riding shotgun. I'm in the back seat. Willie Mays and his two new best friends, in this new pink Thunderbird, pull out onto Potrero. I'm in shock! I keep glancing out the window, hoping a classmate, anyone, recognizes us. I also keep glancing at Mays. Yep! That's still him.

We take a right at the gas station at 16th Street, now heading west. Just before Bryant—at the same place my mother dropped us off hours ago, when I was a lot younger—Mays honks and pulls over to the right, surprising not only me and Kent, but four Dodgers walking down 16th Street. In that somewhat high-pitched, very familiar voice, Willie shouts "Good game!" Maury Wills and Jim Gilliam bend down and peer into the car. A smiling Maury says, "Hey, you too, Willie! Come on have a beer with us," pointing to the bar across from the Double Play. I'm sinking further into shock!

"No Man, I gotta get these kids to their home!" One of the other players offers, "We're stayin' at the Pickwick—you can always come by and play cards." Mays responds, "No, not tonight. See you guys later." As we speed away, Kent asks, "Hey Willie," (no more Mr. Mays?) "that player with the gold tooth, is that...?" "That's Charlie Neal!" "Wow, Charlie Neal."

In the last hour we saw one of baseball's finest throws to home plate, at least half of the Giants being interviewed, witnessed Maury Wills laugh and talk with Willie Mays, and got sooo close to Charlie Neal's gold tooth we could almost see our reflections. And now, the cherry on this baseball parfait—we're riding home with Willie Mays! Isn't this the way life is suppose to be? Another thought runs through my mind. Our parents are going to kill us. We must have died and somehow made it to heaven and now we can't make it home for dinner!

Driving west on 16th across Mission, Kent asks Willie how he likes living in San Francisco compared to New York. Mays responds, "Unlike San Francisco, New York is so huge. When I first got to New York I had a hard time getting around. San Francisco is like a small town and I'm very comfortable here." I said to myself, "Not as comfortable as I am in the back of your pink Thunderbird!" I wish I could say there was a lot of talking. But that was pretty much it. Kent and I were absorbing each second of being with Willie Mays. Mays seemed intent on getting these two kids to their home. Left onto Market past the Mint. On Upper Market Street, Mays is flying! He powers into each curve getting the most out his pink T-Bird. I'm thinking, "This is too cool!" Looking at Eagleson, he must have been thinking the exact same thing. We both lose it and start laughing. Willie Mays is smiling.

I'm hoping we get pulled over by a cop who may know my Dad. ("Yep! I pulled over Willie Mays doing at least 50 on Upper Market yesterday. I cut him loose. He said he didn't want your son and his pal to be late for dinner.) No such luck. Ironic, since this is the luckiest day of my life so far.

We sail pass Juvie. (If it wasn't for sports, it may have been home by now.) Down Portola to Miraloma. Left at Miraloma and Yerba Buena. Final left onto his driveway. Please God, don't let this end! I'm thinking... hey Willie can't you take me and Kent to our homes? Better not push it. There could be a next time!

Willie stops at the top of his driveway. We exit. Kent and I go over to Willie's side of the car and shake his hand. "Gee! We really appreciate the ride! Thanks Mr. Mays!" "Do you guys play ball?" Kent responds, "I play baseball and basketball for St. Cecilia's and Tommy just plays basketball." Mays looks at me and smiles. My guess? He's trying to picture a 5'2" kid playing basketball. "Now you go ahead and tell your parents you're gentlemen." I'm thinking, but still can't speak. I'd like to say, "Hey Willie, here's my home phone number. Would you mind telling them? They're sure as hell not going to believe me!"

Jogging down the hill toward West Portal. "[Expletive], Kent! Did today just happen?"

What a day! What a life! What a wonderful experience for two 7th graders. Thank you again Willie!

More: Read about the troubles Willie Mays had buying a house in western San Francisco.