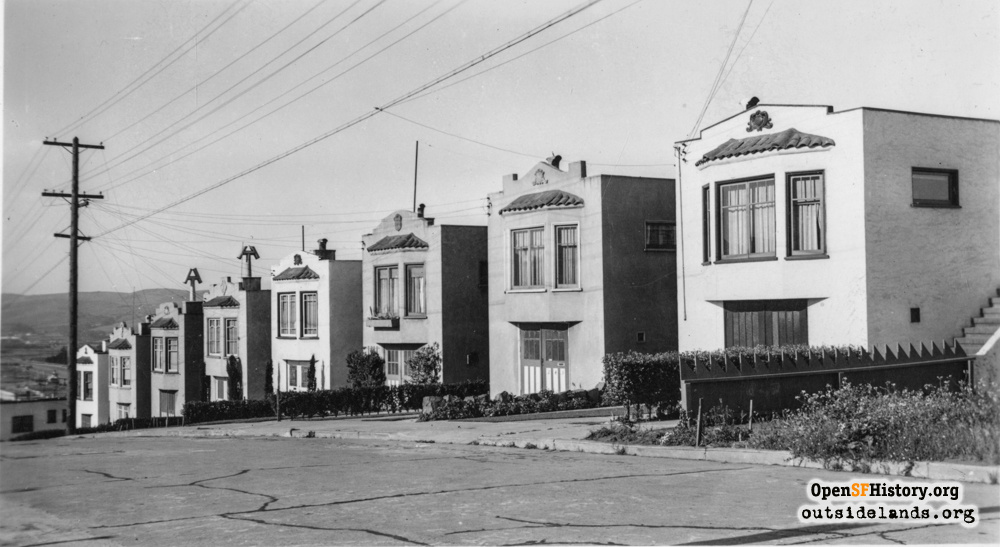 Merced Heights, the center of the OMI neighborhoods, lies upon an east-west ridgeline in southwestern San Francisco. The ridge runs from San Jose Avenue on the east to Junipero Serra Boulevard on the west with a rocky outcrop at its center peak of Orizaba Avenue. The western knoll of Brooks Park stands out like an island above the blocks of houses with trees and a grassy slope facing the Pacific Ocean.

The name Merced Heights dates only from the first years after World War II, when most of what was open hillside on the west succumbed to new housing. Before that, locals called the Brooks Park summit Kite Hill or Poppy Hill. The rest of the ridge was lumped in with surrounding development names such as Lakeview, Ingleside, Columbia Heights, and Ocean View. Even today, the name Merced Heights is mostly applied to the later-developed west half of the ridgeline. 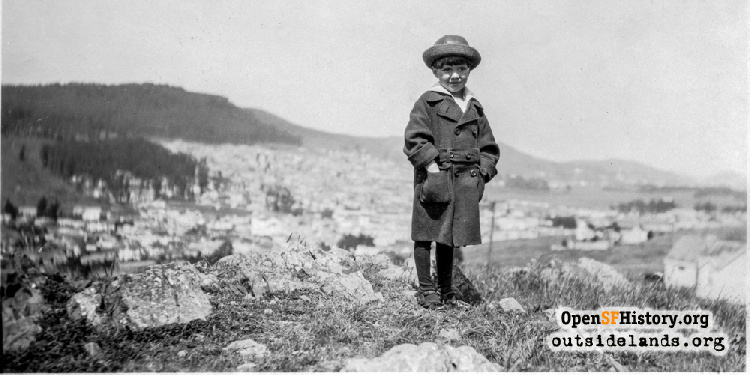 View northeast from about Ashton & Lakeview (the Rocky Outcrop). Mt. Davidson, Homewood Terrace, and Westwood Park are visible, Little boy [Bill] posing with vista of valley behind him. Slope of Mt. Davidson with Sutro Forest on left., circa 1920 -

Maps created as early as the 1860s laid streets and street names over the very top of the Merced hills with great commercial ambition, but with no consideration of the steep grades. One almost gets the idea the surveyors drew up the plans without visiting the site. Some of the streets of Merced Heights took eighty years to become more than lines on a map.

In 1862, George Black surveyed and filed the map for “San Miguel City” on the northeast slope. The tract stood beside the San Francisco-San Jose railroad line and across the Ocean Road from the new Industrial School—a juvenile hall of its time. By the turn of the twentieth century only a few houses, mostly occupied by railroad workers, clung to the hillside. George Black’s plan was slightly realigned and cut with new streets on the east side, and completely overwritten on the west, but today’s Howth and Tara Streets originate from the original 1862 map. 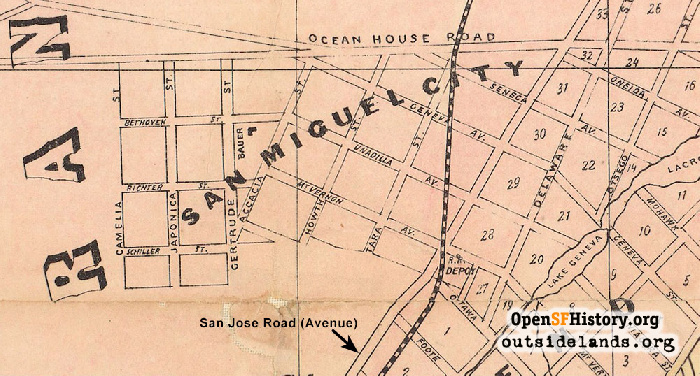 Most of the other streets of Merced Heights date from the plat maps of competing Ocean View homestead associations on the south and the Ingleside neighborhood on the north. The streets of the Railroad Homestead Association (1867) and City Land Association (1870) were separated and offset from each other by Orizaba Avenue. The City Land map extended completely over the hill to Holloway Avenue, but asphalt, sidewalks, and houses wouldn’t arrive until the twentieth century. Some of today’s street names are original to the 1870 map—Shields, Monticello, Vernon, Victoria, Bright—while others were changed, such as Thurston (Beverly), Ford (Byxbee), Walnut (Ralston), and State (Ramsell).

The Ingleside street grid on the north side of the ridge was created in 1890 as a development called “Lakeview,” and its map overwrote the west half of San Miguel City. The Ingleside and Ocean View grids, north and south, reached to each other at the Merced Heights ridgeline, but into the early twentieth century only the often-muddy paths of Plymouth and Capitol Avenues truly split the hill’s spine to connect the communities on each side. Anyone walking or driving a wagon would naturally skirt the heights and come around the old routes south on Mission Street and San Jose Avenue.

The last puzzle piece of Merced Heights came in 1893 on the east-facing slope between San Miguel City and Ocean View when the real estate firm of Easton, Eldridge & Co. filed the map for their Columbia Heights development. 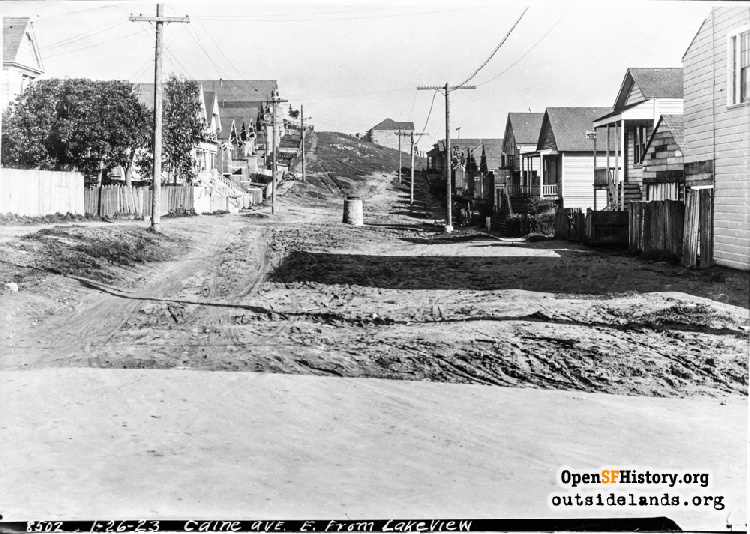 Distant from downtown, with poor transit options for most of the nineteenth century, the area around Merced Heights would be better described as a suburb or country village than part of the city of San Francisco. With plenty of available land closer to the heart of the city and no water, sewage, or gas service on the ridgeline, just a few hardy individuals made their homes up on the hill before the twentieth century.1

The creation of the Ingleside horse racing track in 1895 brought cottages occupied by hostlers, trainers, jockeys, and other racetrack workers to the Merced Heights slope south of the track. Some of these houses can still be found on the blocks between Holloway Avenue and Garfield Street from Beverly to Ramsell Streets. The track closed in 1905 and served as an earthquake refugee camp from 1906-1908. With the dispersal of refugees after the camp’s closing, a few more houses dotted the hillside, and when the residence park development of Ingleside Terraces took over the old racetrack land in 1912, real estate salesmen and the residents of the slope began using the name “Ingleside Heights.”

Enough residents occupied Ingleside Heights to begin serious lobbying for basic services, including water, and the housing boom of the 1920s spurred builders to begin filling in the blocks south of Holloway Avenue with Sunset District-style stucco houses. Even during the Depression of the 1930s, federal mortgage subsidies kept housing creeping up both slopes of the hill from Ingleside and Ocean View. The steep ravine on the southwest side of the ridge, however, remained mostly undeveloped. When the Municipal Railway’s M-Oceanview streetcar line opened in 1925, the tracks ran through mostly open farmland along the diagonal section of 19th Avenue and Randolph Street. 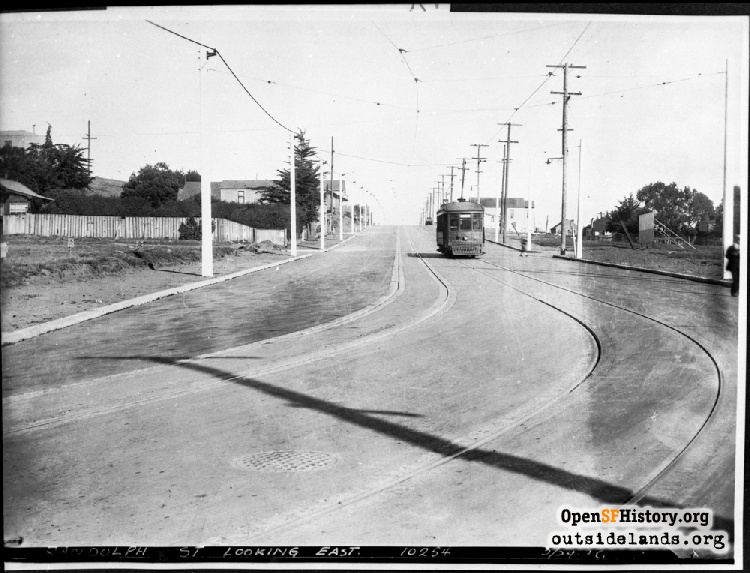 Low interest loans to returning veterans fueled a house construction boom after World War II. In 1946, the name Merced Heights began being used as a neighborhood name in real estate ads for pre-war “Junior 5” models.2 In many of the ads, owners are mentioned to be moving soon and wanting quick sales, hinting at the broader “white flight” to the suburbs that would hit the area in fuller force over the next two decades. Much of the new housing that filled the hillside in the 1950s was marketed to and purchased by African-Americans. 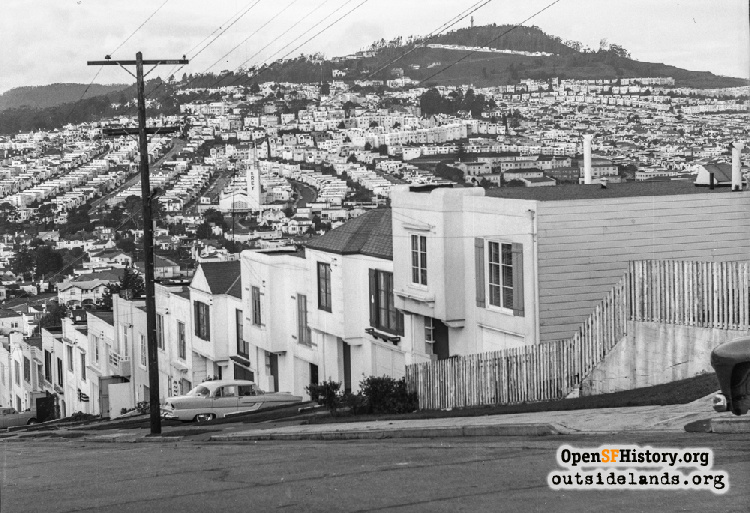 In the 1950s, the non-white population between Junipero Serra Boulevard, Orizada Avenue, Holloway Avenue, and the San Francisco county line rose by 36 percent, while the Ocean View neighborhood to the east saw its minority population go up 55 percent. A study by the Council for Civic Unity in 1961 recorded an influx of African-Americans to the city and noted that racist practices and pressures primarily limited their residence to three areas: the Fillmore, Hunters Point, and the OMI. The last was called in the report “a higher class Negro district with primarily single dwelling units.”3

As the hillside blocks began filling in with houses and families, the city quickly planned a school for the growing new neighborhood. The postwar baby boom had overloaded the city’s public schools in general and new small campuses for kindergarten to third grade children—“home schools”—were created to relieve the pressure. Originally called the Ocean View Heights Home School, Jose Ortega School opened at Sargent and Ramsell Streets with a 250-student capacity in the fall of 1953.4

By the early 1960s, the single-family houses of Merced Heights were 65% African-American occupied. Real estate agents not only steered black buyers away from predominately white neighborhoods to new houses on Merced Heights, but boosted their business with scare tactics to established white residents to sell before the neighborhood become a “ghetto.” Genevieve Jefferson, who lived on Ramsell Street, testified to the U.S. Commission on Civil Rights in 1967 that real estate agents “swooped down on white people with offers to relocate” and urged her “to get out while you can.” She even had two friends trying to buy a home in her neighborhood who were told, “Caucasians were no longer wanted there.”5

Jefferson was part of the Merced Heights Neighborhood Association (MHNA), an improvement group formed in October 1961. MHNA engaged in typical community association activities such as street cleanup days and lobbying for better bus service, but also promoted the harmonious integration in the neighborhood. Real estate agent Julius T. Johnson, one of the group’s leaders, expressed the group’s hope that “through working out our neighborhood problems together, the two races will get to know each other better. We’ll find the areas we have in common, sit down over a beer or a cup of coffee and talk things out.”6

MHNA was one of the first of a series of improvement groups that blossomed in the 1960s and led to a broader Ocean View-Merced-Ingleside community identity that continues today. 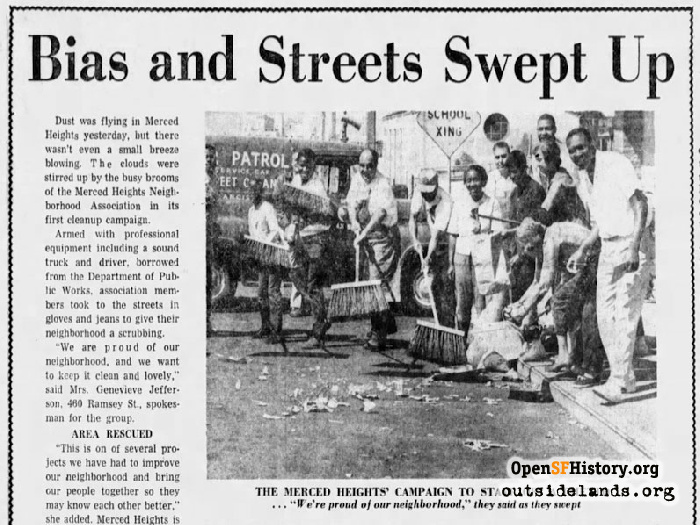 1. Although the railroad ran past the ridgeline, the fare cost three times the typical streetcar fare in the city.

2. The Junior 5 model had a compact floor plan with two bedrooms, a living room, and a combination kitchen/dining area.