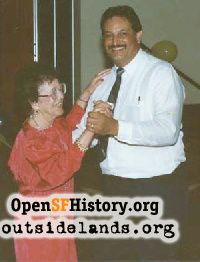 Many a local boy recalls being forced to dance with GIRLS (ewww…cooties!!) during the weekly classes led by Mrs. Inez Hunter at a number of Catholic grade schools in the Sunset and Richmond Districts.

Our teacher was born Inez Alma Berine on November 15, 1902, the daughter of Raymond Berine and Florence (Eisfelder) Berine, both of California. She graduated from San Francisco's Girl's High School in 1920.

She married Thomas "Jack" Hunter. Mrs. Hunter was a real character and her husband was like-minded…a big man with a hearty laugh and a deep, scratchy voice, who always sported a HUGE cigar. They were a perfectly matched couple.

She had two daughters, Nancyhelen and Carol Inez (now known as Rabia) and saw Nancyhelen go on to be a major feminist force in Washington State in the area of encouraging women to run for political office. Nancyhelen passed away on December 1, 2008 at the age of 77. Rabia, now 74, is currently an Advisory Council Member for the Sonoma County Council Committee on Ageing.

Why and how Mrs. Hunter decided to become involved in the art of dance is not known. Aside from teaching in Catholic schools, she also had a dance studio that she operated out of her own home, teaching ballet, tap, jazz and acrobatics. Your author was one of her students. She gave recitals at places like the Laguna Honda Home and the San Francisco Maritime Museum, usually during the holiday seasons. They were always great fun, despite the grueling rehearsals, mothers laboriously sewing elaborate costumes and dads building props.

In 1985, the St. Cecilia Class of 1960 invited Mrs. Hunter, along with our other teachers, to a 25th reunion held in the school's auditorium. As the photo shows she did not hesitate, just like in the "old days," to pick out the tallest boy to engage in an honorary dance. She also danced with a few of the girls, just to make sure they had remembered their long-ago lessons. Seeing this wonderful woman again, after so many years, added a welcomed and whimsical touch to the gathering.

On the occasion of her 85th birthday, she threw a big party at a hotel in San Francisco, and invited not only friends and family, but also former students. The turnout was impressive. Everyone brought old photos of their dance school days, which were pinned up on a bulletin board next to Mrs. Hunter's contributions. Her husband, with his ever-present large cigar, delighted in being surrounded by such an enthusiastic group. Mrs. Hunter even did a little dance for us. By golly, she still had all the right moves…

Paul Judge: "Over in the Outer Richmond, Inez Hunter provided folk dancing lessons to every 1st through 8th grade on Tuesday mornings at St. Thomas the Apostle. She was regularly outfitted in one of her colorful folk dresses and soft dance shoes. She impressed me with how effortlessly and gracefully she glided across the floor. She worked pretty hard to teach us and didn't truck resistance—thus we ended up being able to dance. It was nearly obligatory for us boys to decline interest or outward enthusiasm to this weekly task. I don't know how the girls felt, but it sure beat spending time at the chalkboard perpetually diagramming sentences. Like many youngsters in the neighborhood, my younger sister Mary took ballet lessons from Mrs. Hunter at her studio in the garage of her home on 44th or 46th and Cabrillo. It wasn't unusual to see grade school girls, dressed in their tights, toteing toe shoes and making their way to afternoon dance lessons while us boys played ball in the street." 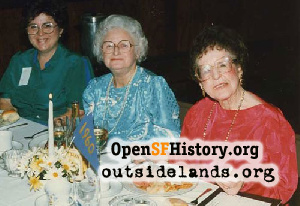 W.M.: "I went to St. Cecilia from 1st grade (1961) through 4th grade. I remember dance classes with Mrs. Hunter. Because I was tall for my age, she always made me dance with her as my partner. It made me a better dancer."

One of her students recollects, "Mrs. Hunter was a godsend to me after my Mom died. Don't know what I would have done without her! Even though I quit ballet eventually, I still kept in touch with her. We went out to dinner quite frequently as she always wanted to eat somewhere that she couldn't go to on her own after her husband died. Because I could drive, we went to places all over San Francisco. And she was in pretty good health until she got cancer in one of her feet (isn't that ironic since she taught dancing). She went downhill pretty fast after that, and ended up with pneumonia."

Our teacher pirouetted into the Light of that Great Studio in the Sky on November 14, 1992, one day short of her 90th birthday and the big party her daughters had planned for her.

We owe a huge vote of thanks to Inez Alma Beirne Hunter for trying to teach a bunch of awkward pre-adolescents how to be social and graceful. Perhaps she did not always succeed, but she left us with some wonderful memories and a few dance steps to impress our dates with.