Niantic Street is a tiny dead-end road trapped between Alemany Boulevard and the 280 freeway.

On March 23, 2003 earthquake refugee shack expert Jane Cryan and I took a tour of "potential" shacks in the city. These were structures that were brought to our attention after the recent publicity about the Kirkham Shacks the Western Neighborhoods Project is trying to help save. We didn't have any luck certifying "new" shacks until we made our last stop at the residence of Tom and Maureen Ginella. 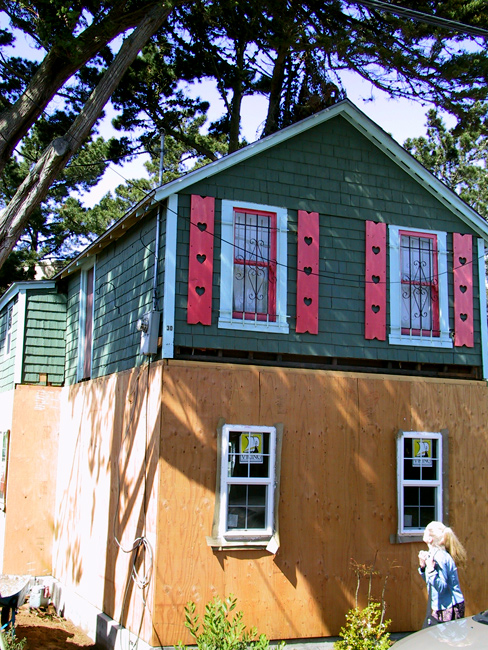 Niantic Street is a tiny dead-end road trapped between Alemany Boulevard and the 280 freeway. Recently erected Ocean View condominiums loom over the small homes that humbly line one side of the street. San Francisco Heritage had given me a tip that a shack had been renovated at 30 Niantic as a garden shed. I subsequently talked on the phone with Tom Ginella, who told me he had put his shack on a nice foundation and that the Planning Department thought he'd done a good job.

So when Jane and I pulled up that Sunday, we began walking around the side of the property, past the two-story house that a workman was hammering away at from a ladder. I couldn't see any garden shed, and confused, I looked up at the workman on his ladder. My jaw dropped, and Jane behind me gasped. The second story consisted of two "Type A" shacks end to end in absolutely amazing condition. Jane quickly pointed out some of the original park-green paint that showed at the bottom where the two joined. When Tom and Maureen came out to greet us, she hugged them both excitedly.

I climbed a temporary ladder upstairs and was delighted to see early walls, floor boards and cove ceilings intact ("early" meaning what the first residents put in the unadorned shacks after they left the camps). There were minor additions of a bathroom and kitchen space (which the shacks didn't have originally), and naturally, material had been removed to join the two structures together as one residence, but otherwise it was like a walk back to 1907.

Rather than demolish the two tiny shacks, the Ginellas preserved them intact as the second floor of their residence, and are in the process of adding a spacious modern area beneath them. It's ingenious and very sensitive to the history of the shacks.

We took photos, thanked them again and again, and Jane has amended the city's list of surviving shacks. There are now officially 21, and according to Tom there may be a couple of more lurking less conspicuously on tiny Niantic! 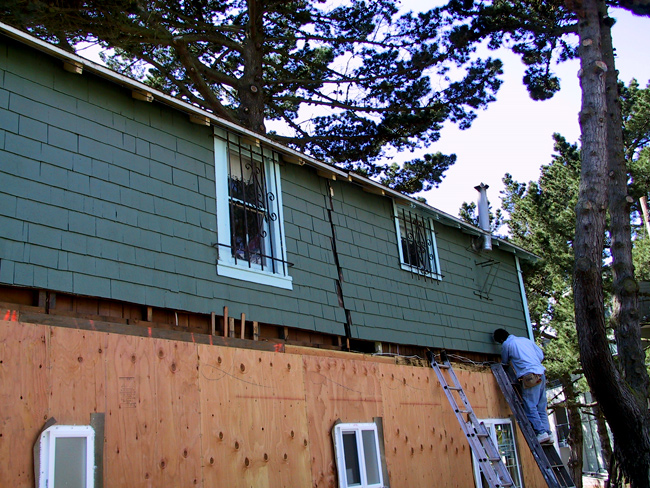