Architectural and Historical Resources of the Sunset District:
The Oceanside Neighborhood

Introduction and Contents of this document

History of the Oceanside 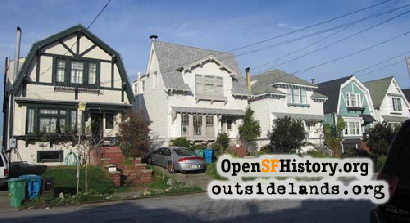 This block contains a row of fifteen houses built by Alonzo Harrington in 1911, some of the finest of the many Craftsman style houses built in the Sunset district during the 1910s. Each is distinct in its composition and ornamental details. Eleven remain much as they were built, and two have recently been restored to their original conditions. Harrington began working as a carpenter in San Francisco in 1886 and moved to the Sunset district in 1892, when it was virtually unsettled. He was one of the first important builders. 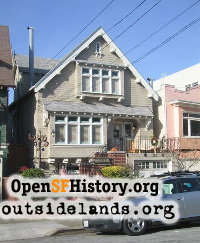 1223 - 42nd Avenue
Built: 1911
Builder: Alonzo Harrington
This house has a cross-gabled roof and a facade clad in wooden shingles. The first story has a wide, slightly projecting bay with heavy beams with carved ends. To the right is the recessed entrance to the house, with a paneled door flanked by a fixed window. The projecting window bay and the recessed entry are covered by a wide shed roof supported by curved brackets and exposed rafters. Centered in the attic story is another slightly projecting bay similar to that in the first story. Like other houses in this row, it is set back from the front property line, allowing for a small front yard. Save for the new brick steps and garage, the exterior appears unchanged from its original construction. 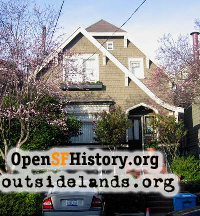 1235 - 42nd Avenue
Built: 1911
Builder: Alonzo Harrington
Another house of this group is an adept blend of Craftsman and Tudor styles. Its most striking aspect is its roofline. The front-facing gable descends to a ski-slope curve on its right side. A secondary gable rises to a slightly higher point at the right. The entry is a Tudor arch with molded wooden trim. In the first story is a large, fixed, tripartite window and transom with heavy molded muntins and transom bar, topped by a row of dentils and an overhanging shelf with curved profile. The front door is paneled and glazed and appears to be original. Save for the garage and steps, the façade of this house is similar to its original appearance. 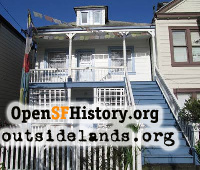 1247-49 - 46th Avenue
Built: 1904
Builder: Unknown
This house was built in 1904 for Fenwick Fulmore, a marine engineer and his wife, Ottie. He was a marine engineer for the Pacific Coast Steamship Company. In 1947, Ottie Fulmore still lived here and was mentioned in a newspaper article as being one of the early residents of the Oceanside and the first president of the Francis Scott Key School Parent-Teacher Association, originally called the "Mother's Congress."

This wood framed house is two full stories in height, though it has the general appearance of being one story over a raised basement. It is clad in rustic, or “drop,” siding. The roof is hipped, with a hipped roof dormer projecting forward from the ridgeline. The roof overhangs the second-story porch and is supported here by four turned posts with diagonal braces. The porch, in turn, is supported by square posts that can be found in the first story. The porch deck appears to be wooden, as is the staircase leading up to it. The staircase and porch railings each have turned wooden balusters. Windows have double-hung wooden sash, and the two front doors are Craftsman in style, with six lights over a panel. All of these elements appear to be early or original. 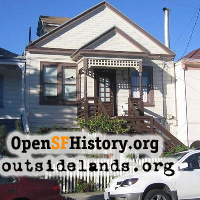 1243-45 - 46th Avenue
Built: 1906-06
Builder: Carl Carlsen
Since the main entrance is in the second story, it has the appearance of a one-story house with a raised basement. It was built by Carl Carlsen as his own home.

Six houses from before 1915, including the two on this page, still stand on this block. 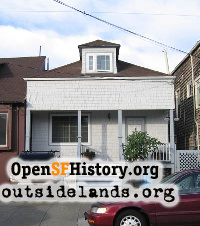 1231-33 - 47th Avenue
Built: 1904
Builder: Unknown
This is among the oldest houses in the Oceanside, hooked up to the Spring Valley Water Company December 1, 1904. This house is similar to many Oceanside houses but is rare elsewhere in San Francisco. "Shingled Colonial Revival" is perhaps the best name for this style. Its defining features are a height of one story or one story plus raised basement; a hipped roof, usually with a central hipped dormer; a full-width front porch; and wood shingle cladding.

This one-story-plus-basement house has all these features. Immediately beneath the leading edge of the roof is a shingled frieze that overhangs the front porch. This porch originally stretched across the full width of the house, but has been reduced to allow for a garage.

The first owner, Felix H. Irvine, also applied for a water connection for the house next door to the north (1227 - 47th Avenue) on the same date. That house also still stands but is much less architecturally intact than this one. Felix Irvine did not live in either of these houses. He taught dancing downtown for a living, lived on Post Street in 1905, and lived elsewhere in the Oceanside neighborhood in 1908. He rented this house to tenants after it was built. 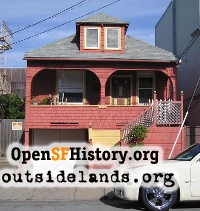 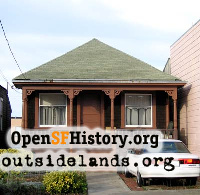 1475 - 47th Avenue
Built: 1910
Builder: Unknown
This house was built for Charles E. Mullen, a musician. It is one of the Oceanside’s least altered old houses and a distinctive example of the Shingled Colonial Revival style. Clad in wooden shingles, it is one story in height, and has a hipped roof which extends over its full-width front porch. Houses of this style were once very common in the Oceanside. 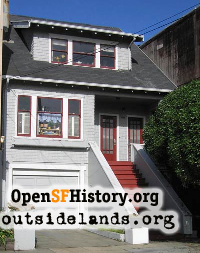 1443 - 47th Avenue
Built: 1912, moved 1916
Builder: Clarence E. Judson
In 1907, a store on this lot was used by Clarence E. Judson, a building contractor. In 1912, he built this house at the rear of the lot and tore down the store. In 1916, he moved this house to the front of the lot and raised it to create a high basement and remodeled the front façade. The exterior of the main floor, above the basement, appears to be from this remodeling. The 1916 design elements, which give the house its distinctive appearance, include the porch, the two doors with full-length glazing divided into many lights, and the wooden double-hung windows. 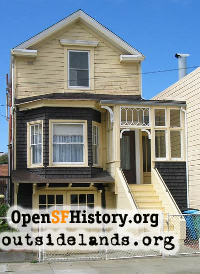 1537 - 47th Avenue
Built: 1906
Builder: Peter M. Leonard
The building of this house began near the end of 1906, when housing was scarce as a result of the earthquake and must have been completed by January 1907, when it was sold to an absentee owner. It is a mixture of styles. The second story is Greek Revival, with a broken pediment with molded cornice and pediment returns. The first story is clad in wooden shingles and has fixed windows with diamond points and curved brackets, giving it a Craftsman feel. The Craftsman element is probably the result of remodeling before 1915. 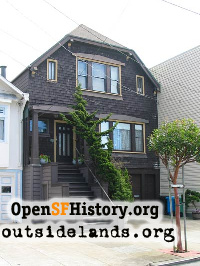 1526 - 47th Avenue
Built: 1916
Builder: Carl Wengard
This house combines styles. Its wooden shingle cladding, and elements such as the four exposed shaped ends of the beams supporting roof, give it elements of both the Shingle and Craftsman styles. It was built in 1916 as the home of Isaac Fuller, a wholesale tool salesman, and his family. This house is one of the most intact surviving houses in the Oceanside; it appears to be unchanged above the basement level. 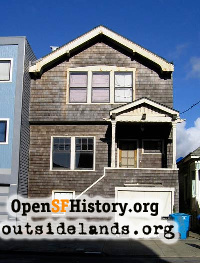 1616 - 48th Avenue
Built: 1912
Architect: Samuel C. Heiman
Builder: R.A. Crothers
The ornament of this house is a good example of the Craftsman style, including the front façade clad in wooden shingles and the side in rustic siding, the gabled roof and porch roof and their decorated supports, the capital and base molding in the porch posts, and the use of multiple lights in the first-story windows. Other than the replacement garage door, the house appears unaltered. Craftsman houses were once common in the Oceanside, and this is a distinctive surviving example.

It was built for Eugene Minzenmayer and his wife who lived here until the 1930s. He was an electrician, born in Germany. The architect, Samuel Heiman, designed houses in many San Francisco neighborhoods, and the Classical Revival Health Center Building at 101 Grove Street in San Francisco’s Civic Center. 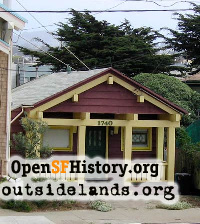 1740 Great Highway
Built: 1908
Architect: George Colmesnil
Alice Pritchard built this house and lived here with her daughter and son-in-law, George Colmesnil. Since he was an architect, it is likely that he designed this house. His most important work was the Metropolitan Life Insurance Company at Stockton and California, now the Ritz-Carlton Hotel. Sanford Lewald, a later owner of 1740 Great Highway, owned a coal company in the Mission District.

This one-story house is in the Craftsman Style. The roof overhangs the front porch and is supported by a post-and-beam system whose heavy wooden members relate to the ridge beam. Its post-and-beam porch and heavy roof purlins (horizontal supports) form a bold pattern that is especially distinctive in a house of this size. The exterior does not seem to have been altered, so it retains its original character.