The Octagon House at Land's End 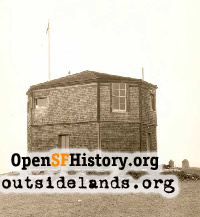 Nearly engulfed by trees above the Land's End parking lot is an overlooked piece of San Francisco's maritime history, the octagonal-shaped Point Lobos Marine Exchange Lookout Station. Completed in early 1927, it was the last of a series of stations that stretched back to the Gold Rush whose function was to watch for approaching ships and announce their arrival. Once a ship was spotted, the lookout relayed the information (especially the ship's name or company insignia) to the Embarcadero where a small army of stevedores, tugs boats, taxis and drayage companies waited to unload the vessel's cargo and transport her passengers.

The easiest way to alert everyone simultaneously to the pending arrival was to establish to a notification network through which information could be quickly exchanged between interested commercial groups, hence the station's original name of "Merchant's Exchange Lookout."

During the Gold Rush, information about a ship's pending arrival was relayed to downtown by a series of semaphore towers equipped with signal vanes. Upon spotting a ship, the Point Lobos lookout at Land's End would adjust the signal arms atop his station to represent the type of ship approaching the Golden Gate. (For example, arms outstretched at the 3 o'clock and 9 o'clock positions meant "sidewheel steamer.") An observer at a similar station atop Robb Hill in the Presidio watched the Land's End station through a telescope, and relayed the signal settings. Overlooking the crowded harbor was the final semaphore station, located atop the hill called Loma Alta and visible to all downtown businesses. Locals quickly nicknamed the prominence Telegraph Hill. 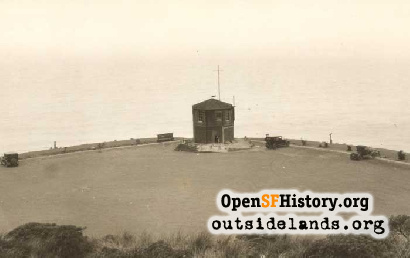 The construction of telegraph lines in 1853 made the semaphore system obsolete, but the need to determine the identity of arriving ships and announce their arrival remained. At one point in the early 1900s there were actually two stations on the hillside above Land's End, one owned by the Merchant's Exchange and the other by William Randolph Hearst, who operated a competing Exchange service to his subscribers.

It should be remembered that all this occurred in the era before radios and ship-to-shore telephones allowed captains to simply call ahead and announce their arrival. And even when wireless transmission began to come into use, they weren't foolproof. (Think of the frequent drop-offs of cellphone service we currently endure.) Hence the need for visual confirmation of a ship's arrival continued for decades. In addition to sending out notifications about arriving ships, the Point Lobos lookout also provided a valuable safety service in the pre-radar era by watching for vessels in distress in the crowded Golden Gate.

The Merchant's Exchange station was relocated three times over the years, and even received a new name in 1911 when it became part of the city's Chamber of Commerce. When the present building was dedicated the Chronicle gave its full title as the "Point Lobos observation station of the marine department of the Chamber of Commerce." (Whew.)

The name Marine Exchange shortly came into use. 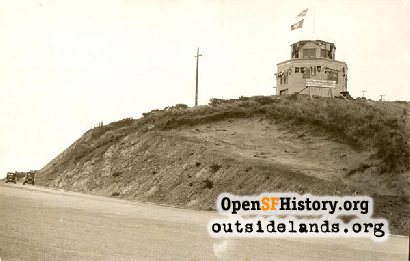 The reason for constructing the new lookout station appears to have been civic improvement. A previous Merchants Exchange station had stood since 1889 at the site of the present USS San Francisco Memorial, but the shingled structure was smack-dab in the middle of a planned scenic overlook being developed as part of El Camino Del Mar -- the ill-fated boulevard that once connected Sea Cliff with the Cliff House. The existing lookout station was still serviceable but it was simply in the way. In 1926 the city decided to demolish the old building and construct a new one on the hillside partway between El Camino Del Mar and the Fort Miley military reservation. The present station was dedicated in February 1927.

Originally, the lookout and his family lived in a residence on the first floor of the station while the watch room upstairs contained a huge telescope (reportedly with a 30 mile range) along with telephone and radio equipment. A garage occupied the lowest level. The building's eight-sided design resulted in a rather unique interior floorplan with several pie-slice shaped rooms. In 1940, a WPA-commisioned history of San Francisco described the station's purpose as "to report vessels entering the harbor to their owners, the Immigration Department, the Customhouse, the press, supply houses, taxi companies and hotels. Craft are identified after they pass the light-ship near the Farallones."

A family member who grew up at the station posted this information to the Outside Lands message board: "There were two lookouts assigned to the Point. Julius Larsen with his family lived there first. He had been with the Marine Exchange for some time already and had moved up from the older station ... which the new station replaced. He was followed by his night relief lookout, William Sloan Morrissey. William married Mr. Larsen's daughter Anne and together they lived there raising four children until Anne took ill in 2002. William had passed away in 1975 but the family had been allowed to retain the house [by the City] in lieu of a pension. The National Park Service honored that contract until Anne was no longer able to live in the house." 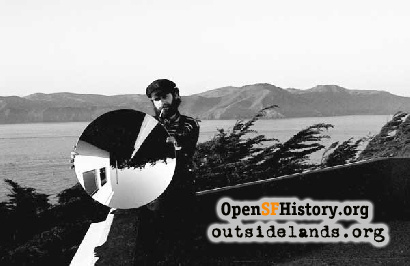 The Marine Lookout Station is now owned by the Golden Gate National Recreation Area, and plans are being developed for the unique building's preservation and future reuse.

Read memories and more about the Marine Station building on our message board.