We were pleased at our last OMI History day with about 60 folks attending, so imagine our glee when we got double! The Voice of Pentecost couldn't have been better hosts, providing the space, tables, an amazing amount of technology and a terrific volunteer to run it (Thanks Juanita!).

Our full program started with a trailer from V.O.P.'s own in-house production company, "WYSIWYG". They've been creating Christian-themed features long before Mel Gibson, and we saw an action-packed two-minutes starring Nero, Paul, and Rome burning (such special effects!).

We then showcased our very successful youth video program with an excerpt from "Lakeview, the Way it Waz" (produced by the Summer 2003 group), followed by the debut of "Getting to Know You OMI", created by students from James Denman Middle School at the OMI/Excelsior Beacon Center. The second film offered the history of the Ohlone people, well-told by Rico Miranda, as well as interviews with Hank and Phyllis Gomez, Agnes Morton, and Svain Hamre from the Voice of Pentecost. The filmmakers shared some of their own hopes for the future in the film, and answered questions from the audience afterwards. Instructor Amanda Herman is the star of the "I am OMI" project for her terrific work with these kids.

Supervisor Tony Hall attended and shared a few words of support for the project and praise for the neighborhood.

ArtsConnection next gave us all a preview of the "I am OMI" play (to debut June 12, 2004) with a moving scene from the work-in-progress. Great thanks to producer Maria Picar, director Norita Gonzalez-Blum, and the cast for their professionalism and skill!

We capped off the auditorium program with our WNP-produced video (using donated newsreel footage from Jack Tillmany), "Building of Westwood Park". Old views of Sutro's Forest being cut down, homes being built, and streetcars passing new (in 1922) businesses on Ocean Avenue.

A raffle of DVDs and videos of the day's films and donated theater tickets (thank you Diane Myrick) sent everyone on their way... after they devoured the refreshments! (Next time we'll buy more cookies!).

We're incredibly grateful to Voice of Pentecost and all the OMI residents who took the time to share their day with neighbors, friends, and us! 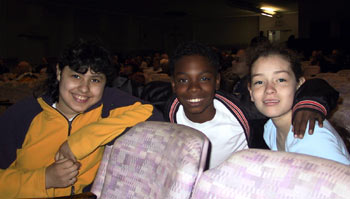