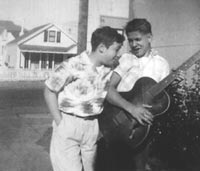 Over the course of the "I am OMI" project, hundreds of neighborhood memories will be gathered and preserved. Taped oral histories are being transcribed and will appear on this Web site as they are ready!

We need your help to identify interview candidates and conduct the interviews! Already many volunteers have stepped forward, but we need more! Join people like Maria Picar, Ray Wilson, Reverend Roland Gordon and others who are sharing and collecting memories to save OMI history!

You can also leave your OMI memories on our message board! Here is just a sampling of people's memories from our site:

"There used to be an ice skating rink on Ocean Avenue, about 3 blocks from my house. My sister could skate, but I never got the hang of it. [...] The El Rey Theater was a beautiful deco movie house where my friends and I would go watch movies all day; and once upon a time, on Ocean, near Junipero Serra, there was a comic book store where I was first introduced to DC Comics. Our next door neighbor owned the gas station that was at the corner of Ocean and Junipero Serra." - Patti Poole

"From Randolph to St. Charles there was a long straight asphault pathway that was the best place to ride your shoe skate coaster. You know, a 2x4 with half a skate nailed on either end and 2 crosspieces, 1 to sit on and another for your feet. You "steered" by leaning right or left. The game was to see how far up the slope toward St. Charles you could go after avoiding a crash on the long downgrade from Randolph.

"The area between the path and where the Junipero Serra causeway crossed the arroyo was relatively flat and broad so that was where we played football. Between Junipero Serra and Lake Merced there was a small road but the area south of the road was undeveloped- no churches or synagogues. Instead it was the site of dense growth of pussywillows and a wetland environment. There was no trouble finding SF and other varieties of garter snakes as well as pipevine swallowtail butterflies and many other critters that are now endangered or extinct. Although the area has changed a lot in the last 55 years if you know where to look you can still see the old arroyo, the playground of my youth." - Mike Blackford

"I believe it was Gene who hosted a yearly Halloween bash in the empty lot next to the store in the evening...then there would be trick or treat afterwards...there were always a lot of games and treats for the kids....remember Roy's service station on the corner of Ocean and Jules?.....the variety store was owned by Mrs. Cook.....the only Chinese restaurant I remember was Sampan's near the El Rey Theatre.....as for the pharmacies, both on Capitol and Ocean, one was the Westwood Pharmacy run by two or three elderly men and the one on the corner." - Ray Wilson

"On New Year's Eve just before the year 2000, we celebrated the last New Years party at the one room [library] branch located at Broad Street and Plymouth. This branch had served the community since the 1930s and had a glass storefront, kitchen (which doubled as a reference room and community copymachine center) and a bathroom so small that even a single child had trouble fitting into it. Classes of children from Sheridan and Jose Ortega Elementary schools, packed the branch (30 kids plus a teacher) several times a week to listen to stories. They shared the space with seniors, teens, parents, and the occasional neighborhood merchant. (Bassim Al-Abood from Fountains's Pizza was a favorite as he could fold paper animals *and* provide pizza samples.)" - Dorothy Coakley