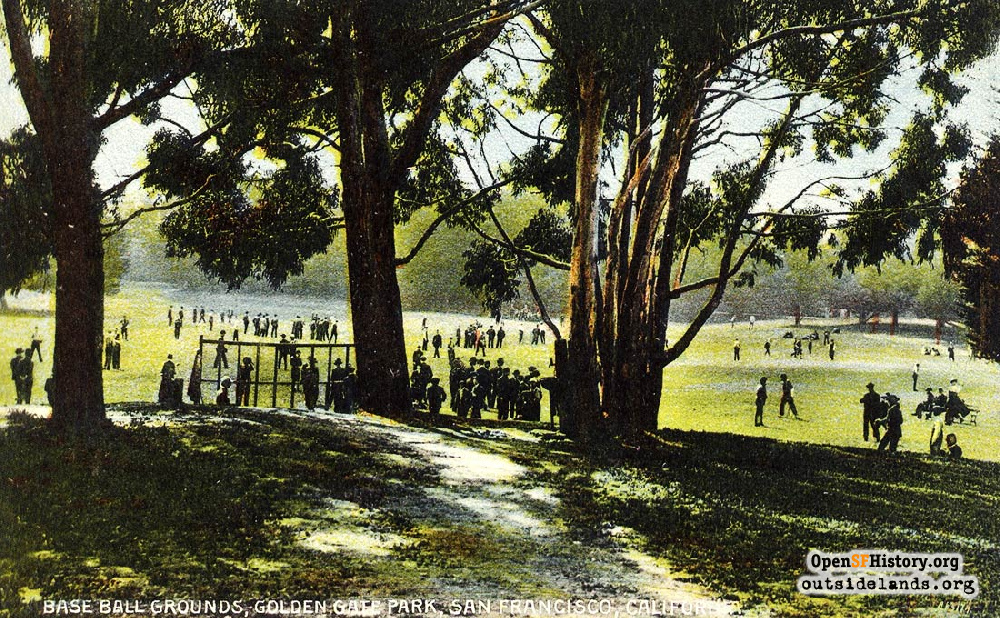 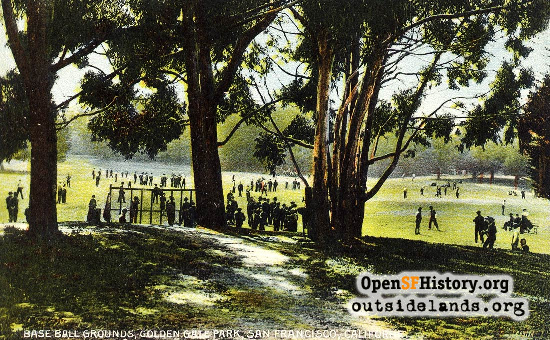 A citizen with the dubious signature of "O.K.K.," writes from Sacramento to inquire into the history and well-being of the Park Bums, and do the Bums mind being called bums.

As near as I can make out from Anson Orr, one of the oldest and most active Bums, the Golden Gate Park Bums glory in the name and would be greatly vexed if called gentleman ball players.

There have been several attempts, says Anson, to change the name to something more elevating, but these were beaten down angrily by the Park Bums themselves, who rallied to protect their good name.

Anson was not around when the Park Bums originated in the [18]90s on the stretch of lawn opposite Seventh avenue. Anson came here in 1910 to pursue his profession of window trimmer and by that time the Bums were firmly established behind a proud tradition of 15 years.

From older historians Anson gleaned the information that the exclusive Bums' clique was founded by perpetually unemployed citizens who relaxed from the tedium of avoiding work by choosing sides of baseball at Big Rec.

Thus there was some basis for the term of opprobrium in the beginning, but later industrious citizens who worked all week were tolerated in the league for Sunday games, although week-day amusement was reserved for unemployed members.

Some charter members of the Sunday division of the original Park Bums were Joseph Lynch, Tom Buckley, Jack DeWire, Andy Boyer, Cy Jones and they, too, endured the epithet "Park Bums" with a smile of tolerant pride.

MUST BE ACCEPTED BY BUMS

To this day, Park Bums jealously guard the common man tradition of their order but I ought to warn unattached bushers that it would be easier to crash the duPont wedding in tan shoes than to be accepted socially by the high toned Bums. 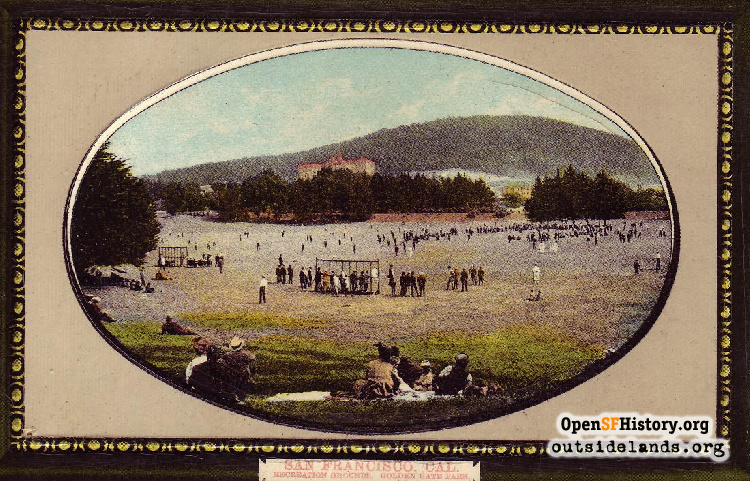 The Bums are a closed corporation without organization or officers but there is a tacit understanding among members that no new brothers shall be taken into the order without the approval of all. A ball player becomes a Park Bum through a vague ceremonial whereby he shows up every Sunday with glove, spikes and sweatshirt and stands eagerly on the sidelines waiting to be called. If, after many weeks of disappointment, he is favored with a tryout in lieu of an absentee Bum, and proves himself a companionable soul, he is inducted as a worthy Bum.

There is no list of members and sides are chosen in a loose manner. A pair of patriarchs, such as Anson Orr and Otto Lang, the Sunset bank manager, flip a coin at high noon to determine who makes the first pick, a refinement of the sandlot custom of choosing sides by wrapping hands around a bat. There are two games a Sunday, the players shifting positions in the late matinee to prove versatility.

NO OLD CLOTHES? YOU CAN'T PLAY

A Bum is not worthy of the name unless he can pitch the first game and play third base or right field in the second with equal aplomb.

Another qualification is the ability to dig up abominable trousers of such ill fit and age that any housewife would bury if she could get her hands on them. A Bum who affects a full baseball uniform is banished as a fop and dandy. The only accessories of baseball haberdashery allowed are cap and spikes.

Old Jeff, third baseman for more than 25 years and since gone to his rest, wore corduroy pants, vest and derby hat at the hot corner. It was a common practice of Old Jeff to knock down a clothes line drive, retrieve his derby, and still throw out the runner by a step.

Some 15 years ago a member who failed to grasp the spirit of the order, called an organization meeting to discuss such bothersome details as officers, dues, membership list and change of name to something more refined. The meeting was held in a Sunset real estate office and only four Bums showed up, ending forever, I hope, all attempts to make the Bums a marching and chowder club.

Among the alumni are Bill Kamm, Mark Koenig, George Kelly, Sammy Bohne, Gene Vala, Dick Gyselman, Babe Dahlgren and Joe Cronin, but I'm sure if Cronin returned for old home week in a Red Sox uniform he'd be ordered off the field and told to buy some old clothes.

George Flach, stock broker and a Bum of long standing, appeared one Sunday in the trousers of a suit newly discarded as unworthy of Montgomery street. His brother Bums judged the trousers too stylish for the league and Flach had to wear the suit to his office for an additional period until the seat and knees showed the badge of honest service.

A relevant bit from the Minutes of the Park Commission back in 1902:

"Complaint made of the use of profane and obscene language indulged in by the ball players in the park on Sundays and weekdays in the presence of ladies and children. The secretary was instructed to communicate with the Sergeant in charge of the Park Police asking him to supply a remedy by more careful police patrol of this particular section. The secretary was also instructed to request for the Park Commission an extra detail of two men for the park particularly on Saturdays and Sundays when the present detail of police was inadequate to furnish the necessary police surveillance."