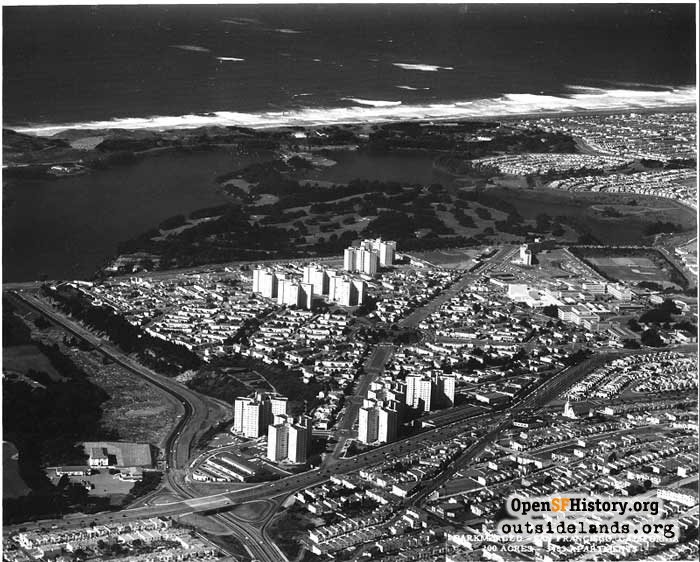 A City in a City of apartment life built by the Metropolitan Life Insurance Company of New York. 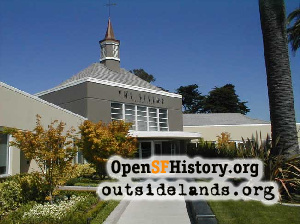 In the mid-1980s my brand-new girlfriend told me she worked in a bakery part-time. "It's in Parkmerced."

"You mean in Stonestown?"

"No, Parkmerced. You know, the big towers?"

Of course I knew Parkmerced. My main impression of it being the last bit of San Francisco real estate you passed on 19th Avenue before you hit the freeway. Usually my parents and I were on our way to Serramonte to buy dress shoes. "There's a bakery there?" I asked again.

The first time I tried to find the bakery (and pick up brand-new girlfriend) I got lost. From the front entrance on 19th Avenue I entered a labyrinth of pie-shaped blocks. Each vista of neo-colonial duplexes and green swards looked just the same to me, and I didn't pass another living person in ten minutes of wandering. The towers, my landmarks once I got out of earshot of 19th Avenue, didn't help much either, all being painted the same greenish-beige (if there is such a color). The fog began its three o'clock commute from the ocean, and great cotton balls of the stuff rolled through me as I sloshed across a huge, gopher-holed meadow.

Eventually I stumbled on the bakery, a sad little shop in a strip close to where I started. The other storefronts were vacant or closed. Brand-new girlfriend said they received maybe ten customers a day, mostly seniors.

She was laid off soon after.

In the 1980s Parkmerced had the whiff of a failed experiment, an urban plan past its time and purpose. Like a defunct army base or an old corner of Disney's Tomorrowland (maybe over near the submarine ride?), it was due for a makeover. One percent of San Franciscans lived there, but it just felt like a place for San Francisco State students to park their cars.

But Parkmerced has changed. In the 21st Century it's called "The Villas Parkmerced". Cheerful palm trees, a fountain, and a brightly-painted gateway office all beckon to the traffic. The banners, flags, public art in the form of a fiberglass heart make one want to at least take a peek in the place. The current management touts the amenities of a club room, small movie theatre, fitness center, Montessori school, and community garden.

The word "community" is used often in promoting the new Villas, which is appropriate for what was labeled "the community of tomorrow." 1 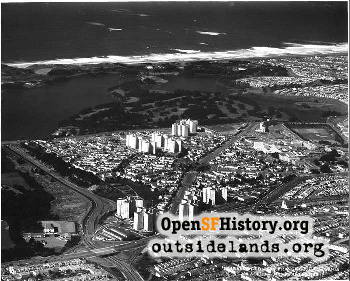 City in a City

Parkmerced was the idea of the Metropolitan Life Insurance Company of New York. The company had fought through the Depression with traditional investment ideas and decided rental housing might provide a more stable cash flow over time. In the Bronx they launched "Parkchester" and in Los Angeles "Park LaBrea". In San Francisco, they purchased almost 200 acres of land from the old Spring Valley Water Company in 1941 and named their new project after the lake next door.

From the beginning, Parkmerced was meant to be self-contained, a "city in a city", with its own courts, play fields, and shopping. Living up to the "park" prefix, Met Life promised that only 18% of the property would be occupied by the planned 2,500 apartments; the rest to be used for "gardens, parks and recreational grounds." 2 A Chronicle writer predicted: "No longer will the sluggish male be able to beg off from a Sunday romp by arguing that it would take too long to get there." 3

Met Life hired the architectural firm of Leonard Schultze and Associates, who brought in the now-famous landscape architect Thomas Dolliver Church. Schultze and Church designed the pie-shaped blocks with apartments grouped around patios and public spaces.

The geometrical plan came from the Beaux Arts tradition. Avenues radiated from Juan Bautista Circle, a center oval, and larger street octagons surrounded it. Continuing developers' decades-long fascination with California's Spanish period, the avenues were named after members of the Anza expedition that colonized the Bay Area in 1775-76. 4

Church's plan included grassy medians strips, vest parks, and a long sward named "The Meadow", which paid perhaps an unconscious homage to the groomed fairways of the Ingleside Golf Course that had previously occupied the land. 5

Metropolitan Life CEO Frederick Ecker predicted that the new development would not only keep people from leaving the city for the suburbs, but would "bring people back to San Francisco who moved out to get a little elbow room." Ecker further promised that his community of tomorrow would be earthquake-proof and---just as homebuilders today plan jacks for high-speed Internet connections---"the apartments will be wired throughout for radio." 6

The idea of creating housing in a park atmosphere, of designing a development with a creative geometric design, and providing "commons" for the residents had been successfully put into practice for decades. From exclusive Presidio Terrace to plebeian Miraloma Park, western San Francisco had been the proving ground for many of these "City Beautiful" guidelines. What made Parkmerced different was the beneficiaries would be renters.

Met Life broke ground in 1941. Scarcely had the work begun when the United States entered World War II, and, as Architect and Engineer remarked "the project [ran] the gamut of ups and downs." 7 Rationing of materials forced the builders to drop steel for wood frame (and some reinforced concrete) construction. About a third of the apartments were cut from the plan. Met Life did its best to appeal for priority in obtaining materials, claiming their housing was essential for the tides of war workers arriving in the Bay Area, and eventually the influx of returning veterans.

Despite all the difficulties, the first occupants moved into their garden apartments on Font Boulevard in early 1944. Rents varied from $52 to $84.50 a month.

In a review for Architect and Engineer, landscape architect Mark Daniels praised the way the apartments had facing courtyards that created community space. He noted that as a balance the front of each domicile had private terraces where the tenants could "serve a highball (if they dare) without running the risk of having their generosity interpreted as a general invitation."

Maybe these courtyards were once the scene of great 1950s barbecues and badminton games, but I've never seen them used as more than paths to and from the carports. As for highballs on the front "terraces"... well, it's a nice idea. Parkmerced made the effort to design for community interaction, but perhaps the fog and general insular nature of modern Americans worked against its flowering.

Daniels recognized the difficulty of balancing privacy and community. He wryly concluded that the architects and engineers of Parkmerced "could not, nor could anyone, provide all the seclusion of a private estate and maintain a community plan. They had to omit provision for nudists to pursue their pastimes and habits. They have, however, accomplished more than anyone thought they would, or could." 8 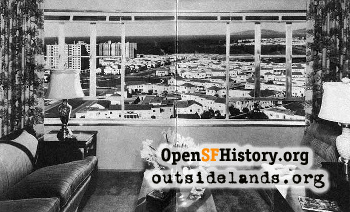 After fighting and struggling for three years to get the garden apartments built, Parkmerced benefited from the post-WWII housing boom, and jumped eagerly into a second phase of construction.

A proposal for eleven thirteen-story apartment towers flew through City Hall's permit process in 1949, and soon San Francisco's tallest structures west of Twin Peaks loomed above Lake Merced. Streamline moderne in design, the towers were dotted around the landscape in a seemingly random pattern. With their "wings" reaching out from a central core, they give the feeling they might take to the air---alien spacecraft or Cold War missiles primed for flight. 9

Circular sofas still decorate elevator lobbies, but the attending doormen of the 1950s are gone. The apartments still feature parquet floors and kitchens with galvanized metal counters and cupboards, but the underground garage no longer has its working service station.

The Stoneson Brothers, builders of the nearby Lakeside neighborhood and single-family homes across the city, knew a good idea when they saw it and started their own Stonestown city-in-a-city" to the north. Experts predicted the end of row-houses in San Francisco, to be replaced by planned apartment and shopping communities across the city in fifty, maybe even twenty-five years. 10

The community of tomorrow had arrived. For some...

In 1941, the year Met Life began the Parkmerced project, Paul Trafficante decided he had to get away from the organized crime violence of his native New York City. He first took off for Alaska, and after World War II joined the thousands who decided to make San Francisco a new home. He eventually rented an apartment in Parkmerced, and saw that in a rapidly diversified city the enormous complex was overwhelmingly white. Minorities were actively discouraged, their applications delayed, and waiting lists for apartments were manipulated to keep them out.

Trafficante, a Caucasian, sued Met Life in the late 1960s, claiming that because of its exclusionary rental practices he "lost the social benefits of living in an integrated community, missed business and professional advantages that would have accrued from living with members of minority groups, and suffered from being 'stigmatized' as a resident of a 'white ghetto'."

Could a white man claim discrimination for not being allowed to live near minorities? Trafficante thought so, and his case went all the way to the U.S. Supreme Court who ruled unanimously in his favor in 1972:

"While members of minority groups were damaged the most from discrimination in housing practices, the proponents of the [1968 civil rights] legislation emphasized that those who were not the direct objects of discrimination had an interest in ensuring fair housing, as they too suffered." 11

Met Life settled out of court, and opened their apartments to all races. Trafficante lived in Parkmerced until his death in 2001. 12

In the middle of the Trafficante suit, Metropolitan Life sold Parkmerced, and a series of ownership changes came in the next decade. Stability of a sort came in the mid-1980s when Leona Helmsley, a real estate investor who was nicknamed the "Queen of Mean" in New York, bought Parkmerced.

It was in the Helmsley era that the place acquired a moribund look that it has only recently been shaken off. The population acquired an older demographic, and a writer in 1981 called Parkmerced "an overplanned retirement community of low- and high-rise apartments and self-consciously curved streets." 13

The current owners advertise "The Villas" aggressively, courting students and young families. They sponsor good causes such as Friends of the Library events, and concerts in Stern Grove.

San Francisco has often anguished over how to stop the exodus of the middle class and the families. Parkmerced's founder Frederick Ecker planned a place of "simplicity, utility and beauty" to keep moderate-income renters in town. Today, the mayor and the supervisors blame housing prices for the new race for the distant suburbs. Rather than moderate rents, all seem to think more $800,000 housing on the market is the answer.

And San Francisco's marketplace richly rewards anyone who can put out a "For Sale" sign. So Villas Parkmerced is creating more housing. Whether a moderate-income family like my own will be able to buy isn't known at this point.

My great thanks to Inge Horton, whose report on Parkmerced and Thomas Dolliver Church for DOCOMOMO (Document and Conservation of the Modern Movement) was invaluable.

4. Since some of the Anza expedition were already commemorated on San Francisco streets ---Anza, Cabrillo, Castro, etc.---Met Life used many maiden names of the wives who came with expedition. For example, Serrano Drive honors de Anza's wife, Dona Ana Regina Serrano. See paper by William F. Benedict, The Anza Expedition of 1775-76 to Colonize San Francisco, Used as a Theme for the Naming of Thoroughfares..., August 18, 1941. Copy in WNP files.

5. Landscape architect Mark Daniels complained about the name: "[W]e do not think of a 'Meadow' as a place to play games, but rather as a place for sheep and kind-faced cows to graze." Architect and Engineer, Vol. 158, September 1944, pg. 14-22.

13. Shepard, Susan, In the Neighborhoods, Chronicle Books, San Francisco, 1981. Shepard was generally disparaging of the southwest part of town.