Banking in the Parkside

Amusing memories of working at a Parkside District branch bank in the late 1960s.

Banking in the Parkside

After business school in the late 1960s, I joined the Bank of America in San Francisco as an international trainee. Given that the bank's balance sheet was a function of its branch network, all trainees were put through the system. One of my assignments was credit training at Bank of America’s Parkside Branch on the corner of Taraval and 20th Avenue. I was one of the few people at the branch whose name ended in a consonant. The branch was very Italian: Sam Centanni was the manager; Vic Damazonio, Assistant Manager, real estate; Dave Dioli, operations manager and Bob Zerrila, commercial loans; and Babe Roselli, auto loans. They called me Stefano Giordiano, which is Stephen Jordan in Italian.

A stately man, Sam always wore a homburg and overcoat over his shoulders (arms never in the sleeves); each morning promptly at 8:30, he would stand at the front door that Dave Dioli unlocked for him; entering the bank, Sam would shrug his shoulders and Dave caught the overcoat and was handed the hat that he hung next to Sam's desk. Coffee (cream and one sugar) was brought to Sam, and Sam spent the day holding court. Customers didn't kiss Sam's hand; but, other than that, Sam spent the day receiving supplicants pretty much like Vito Corleone.

There was immediate concern about my religion. I made sure everyone knew I was a Catholic.

"So you look like a college guy; where did you go, USF or Santa Clara?"

"Oh, a secular education. What kind of name is Jordan?"

"Anglo-Norman." That slowed them up. 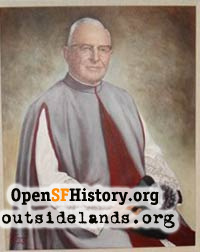 I gradually fell into the swing of things. At the time I spoke Spanish and spent my days with Bob Zerrila making loans to Spanish Basques who just got off the boat and were starting careers as gardeners. I translated; Bob did the paper work. Always two brothers, the Basques all wanted a used Chevy truck, two lawn mowers, hedge clippers, rakes and other garden tools. Bob and I created a $5,000 package for all the equipment with a local hardware store and the nearest Chevy dealer. A couple of years later, I ran into Bob downtown, and he told all our loans were repaid as agreed; the gardeners were buying up apartment buildings.

One day in November, Babe and I were told to go to St. Cecilia's and collect the money from their recent festival. Little did I know at the time I would be married there just a few years later. Babe was not happy and swore (“That bleeping Irish…”) under his breath during the short trip. We met Monsignor Collins who told us to take the car around to the back of the church. In a locked room were bags upon bags of money: Monsignor Collins estimated that it was about $50,000 in pennies, nickels, dimes, quarters, and half dollars. He gave me an envelope with about $500 in bills. Babe and I spent a good deal of time loading up the trunk until the car's rear-end was almost touching the pavement. I asked Babe why we didn't insist that the coins be rolled; he told me nobody told that Monsignor what to do. We drove back to the bank at about five miles an hour and unloaded the bags; Babe called the Central Cash Vault to send an armored truck to pick up the coins. That Babe and I had been driving around with $50,000 in cash didn’t seem to bother anyone. It was only after the coins were unloaded did Babe notice the rear springs of his car (a ‘65 Buick) had been broken under the weight. Babe would spend much of the following two months convincing the bank to pay for the new springs.