The Parkside and the Characters from Long Ago

Remembering three interesting men from the Parkside District of the 1930s and 1940s.

The Parkside and the Characters of Long Ago

I am eighty one years old and grew up in one house in the Parkside District. I went to Parkside Grammar School, Aptos Jr. High, Lincoln High, and graduated from San Francisco State.

I don't want to take anything away from a great city like San Francisco with its beautiful cathedrals, institutions of higher learning, skyscrapers, and beautiful vistas. But my memories of San Francisco are a city with many small towns. When anyone my age meets another San Franciscan, we always ask what district they were from and what high school they went to. I am still smarting from hearing Parkside School renamed for Dianne Feinstein. Oh, not for political reasons, but rather, because she grew up in the Richmond. How about naming it after one of our Parkside notables? This is our little town. 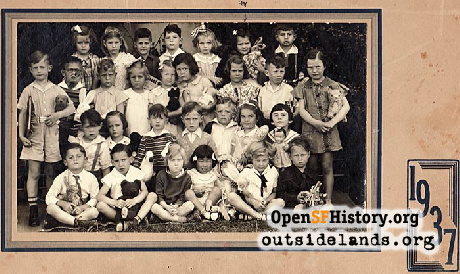 Unlike other areas in California, San Francisco embraces its characters—those dear folks that wander around town harming no one, but marching to a different drummer. I would like to tell you about three of them, so they won't be forgotten. They added to the fabric of a long ago Parkside.

My first "character" lived on my street. At one time he was a successful business man. One day that all changed. Why? We'll never know. I grew up seeing him in a sharp business suit heading to Taraval Street and the L Line. Then one day he changed to work clothes and a long black overcoat. He would set out each morning, at the same time, with a large burlap bag. He never looked to the left or right, intent on his new job... picking up old candy wrappers, empty cigarette packs, and any other garbage tossed on sidewalks or parks. (We were a generation of Litter Bugs.) His job now, to keep the Parkside clean and neat. Every evening he returned with a bag full of litter and each morning set out again. He let his hair grow long. ( A man with long hair? A novelty in those days.) He did this for a number of years and was never chided or told to stop. In his new world he was performing a service and at the same time letting us know how much he cared for our little town, the Parkside.

We only knew character number two as "Bud." Bud could be found most days just up the street from the Parkside Theater, almost in front of Zim's. He was a tall young man, maybe in his twenties, in pressed slacks and shirts, blond hair combed neatly, and always carrying a metal lunch pail. I never saw him without a smile on his face. When asked where he was going, he would always reply, "to work." He greeted everyone, waved them goodbye as they rode by on the L streetcar. On my visits back to the old neighborhood, I can't cross 19th and Taraval without thinking of Bud. 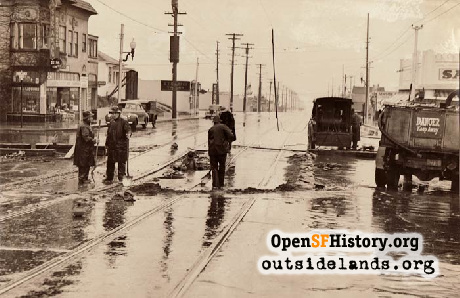 Character number three is from the Depression and the 1930's. A real mystery man. We only knew him as "The Man With No Legs." Some said he was injured in World War One, but none of the children or parents knew where he came from or where he lived. We would hear him first. He would sing long ago forgotten melancholy songs from a megaphone he carried. You could hear him from a block away. He had lost his legs just below or above the knee. (It was rude to stare, so we only got a glance.) He was strapped in something I only remember as a wooden board with wheels. I believe he moved around the hills of Parkside pushing himself with his free arm. Our mothers would give us a dime and we would run from our homes, drop it in a cup attached to his board, and scurry inside again. We never shared a word or conversation. Sometimes I can almost hear those forgotten sad songs.

These three are all sweet memories of men who walked our neighborhood, never harmed, and were treated with respect. Only in San Francisco!