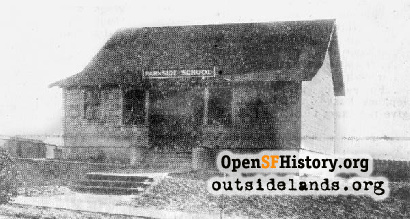 "Through the efforts of the Parkside Improvement Club, the Board of Education was induced to cause a building for that purpose to be erected on T street, near Thirtieth avenue. The school was dedicated on Sunday, September 19, 1909, in the presence of a number of the city officials. The entire population of Parkside turned out, and the program was a complete success. R.M.J. Armstrong presided, and the principal address was delivered by Thomas Hayden, at that time a member of the Board of Education. the flag raised by the children was a beautiful part of the exercises.

"The school opened on Monday, September 20th, with Miss E.A. Kirwin as temporary teacher. She was succeeded in two weeks by the present permanent teacher, Miss J. Ephraim, who is one of the most careful and efficient teachers in the city of San Francisco. Her work has been truly wonderful, and it is not to be wondered at that the children all love her, and it seems no trouble for her, not only to maintain perfect discipline, but to produce such splendid results in the work she has undertaken in this ungraded school. May Parkside School continue to grow and prosper under the leadership of Miss Ephraim."

From the Parkside District Improvement Club Scrapbooks (Vol. I): "When Parkside School was opened in September 1909 it was a primary school with grades first through fourth. A fifth grade was added in Sept. 1910.

A new building was erected and given the name Parkside School in 1922. According to the archives of the Archdiocese of San Francisco, when the old school building closed in 1917, Mayor Jim Rolph donated it to St. Cecilia's new parish, and it was moved to 15th Avenue and Taraval Street. 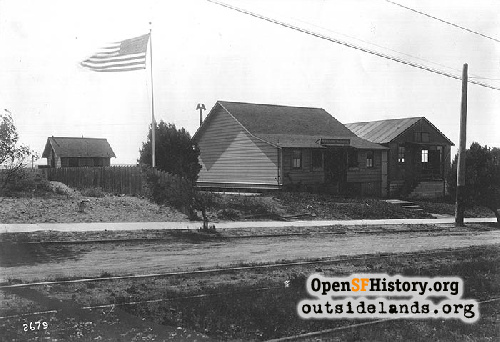