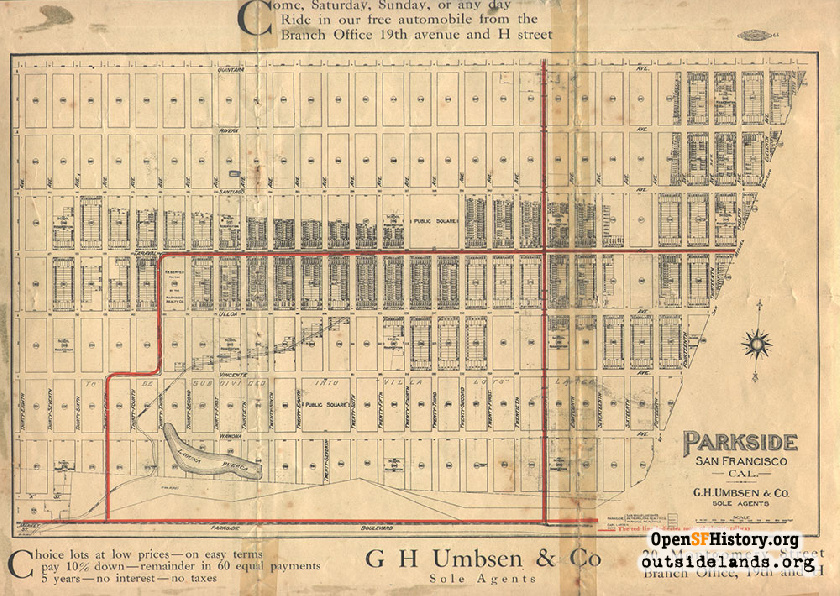 In March 2003, ninety-five years of Parkside District history were safely preserved and made more available to the public. After much negotiation, the Parkside District Improvement Club deeded their unique historical scrapbooks to the San Francisco Public Library's History Center.

"These are great, just fantastic." exclaimed Susan Goldstein, City Archivist at the San Francisco History Center, as she paged through the books. "We're so happy to have these."

When the Parkside District Improvement Club formed in 1908 the neighborhood was more sand dunes than streets. Residents had no basic services and to "get into town" one had to trudge to the one streetcar line that went as far as 20th Avenue and today's Lincoln Way.

Within a couple of years the club had successfully lobbied for streetlights, a school, a sewage system, better transportation options, and organized a volunteer fire department. All these achievements are documented in the four scrapbooks, which were carefully constructed over the decades by club historians such as the late Opal Piercy.

These volumes are far more than a collection of meeting minutes and account ledgers. Inside are pasted photos of parades, banquets and club ceremonies. Early local business advertisements and stories about the building of the Twin Peaks Tunnel are captured in newspaper clippings from long-extinct neighborhood newspapers such as the Sunset Journal and Parkside Pacific. Flyers, badges and programs remember the dedications of McCoppin Square and Parkside Park, and the openings of Lincoln High School and the Parkside branch library. More recent articles detail the fight to stop west side freeway plans in the 1960s.

The neighborhood's annual May Day event pops up on the pages frequently. Year after year, the Parkside District Improvement Club hosted the outdoor celebration and innumerable photos and clipping show six-year-old girls being crowned May Queen.

"May Day was a big deal," Betty Jael, president of the Parkside District Improvement Club remembers. "It meant so much to the little kids to be all dressed up." Mrs. Jael is happy the club's scrapbooks have a new home: "Better at the library than sitting in someone's basement."

Which is where the scrapbooks were kept for the past few years. Without a clubhouse or other facility to keep them, Mrs. Jael had the books stored in boxes in a garage. The Western Neighborhoods Project lobbied for close to a year to transfer the fragile volumes to the protected vaults of the San Francisco History Center.

"We had two things in mind," said David Gallagher, WNP president. "We wanted the scrapbooks preserved in a safe environment and we wanted them available to researchers, writers and the general public."

Lorri Ungaretti a local historian who's doing research for a book on the Sunset District, received a sneak peek at the resource she's heard so much about. "They are amazing," she remarks. "They give you a picture of the area you can't get anywhere else."

The Parkside District Improvement Club carefully stipulated in their agreement with the library that copies of the scrapbooks be held at the Parkside branch library for local residents to access. The Western Neighborhoods Project will also be continually adding highlights from the books on this Web site.

"It's going to take a little while," Goldstein says about the copying. "But we're delighted to have a copy in the Parkside branch."

Ungaretti is ready: "The scrapbooks are a great source not only of events, but of what people were thinking at the time. I look forward to spending time with them."

More from the scrapbooks will appear in the Spring 2003 Membership newsletter and on this site in coming months! 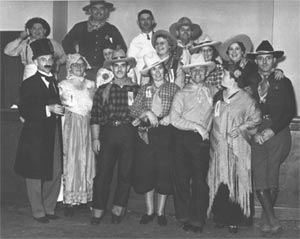 Images: 1) PDIC Letterhead; 2) Ribbon commemorating the opening of Balboa Park and Ingleside Police Station, 1910; 3) "Western day" party from the 1940s. All courtesy of the PDIC Scrapbooks.

A version of this article appeared in the Sunset Beacon, April 2003.