From 1909 to the 1980s, Pesce's Market served the Ocean View neighborhood on Sagamore Street.

Pesce's Market: Serving the Community Since 1909

by Marsha Fontes
(Originally published in the OMI News, November 1977.) 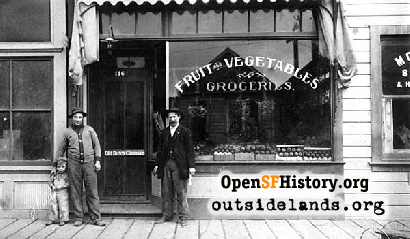 There is a constant stream of people going in and out of Pesce's Market. Many people from the Ocean View neighborhood, and many who still stop on their way to and from work as they drive off the freeway onto Sagamore Street. All stop to visit a little, get their groceries or the large, very Italian sandwiches the deli department is famous for. Or maybe to indulge themselves with the assortment of gooey pastries that decorate the checkout counter. Pesce's gives what cannot be gotten in the large slick supermarket, personal service and friendship.

Marge Pesce usually runs the cash register and is the first to have a good word to say, or for regular customers, a bit of a rib. Marge is a sister-in-law who went to work in the store after the sudden death of her husband seven years ago. She says, "I really like people so this was the job for me." When asked why she chose to work here instead of somewhere else, she replied, "Well, this was family."

Family is the reason that the store has operated so successfully all these years. Sisters and brothers working closely together in good-natured harmony, helping and looking out for one another. 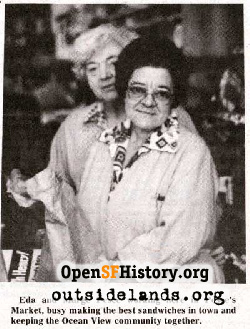 Now their children are working in the store, the third generation of Pesces to learn the grocery business.

Marsha Pesce, 19, who works in the store part time, says she learns more in the store than she does at her school, San Francisco State University. "This is life," she added.

Pesce Market and Delicatessen at 118 Sagamore St. has been in operation since 1909 when it was first opened by Paul and Marie Pesce, who came to San Francisco from Genoa, Italy in 1903. The grocery at that time was just across the street from the Southern Pacific Lakeview train station and the center of a small community that was rather isolated from the city until the M-car extension f the Muni ran down Randolph St. The family lived over the store in a flat where Paul and Marie raised all of their nine children. All the children worked in the store at some time or other, three of the children still do. And Elmer, 68, who does the deliveries and produce marketing, still lives over the store.

When asked about the future of the family-owned grocery, he answers with a shrug, "Who knows? This is not easy work. But I like it." So there is good reason to believe that some of the children of such a large happy family will like it, too. Pesce's is the cornerstone of the neighborhood, something that has always been around and should always be around.

Pesce's Market closed in the 1980s. Thanks to Linda Johnson for donating the OMI News to us.