Playland through the eyes of a local boy in the 1940s.

Our family lived three blocks up the hill from Whitney's Playland-at-the-Beach, the roller-coastering, roaring amusement park at the end of the streetcar line and, in 1946, it was blowing its top. My San Francisco childhood resonated to the roar of the Big Dipper and the shrieks of thrilling girls with their sailor-suited dates.

In fact, I can see them right now coming through the fog, saddle-shoed bobby-soxers like my sister and Jughead-capped jitterbuggers like my big brother. They knew their way around Playland, you bet. Gleaming red candy apples on a stick meant nothing to them. Cloudlike cotton candy, what did they care? 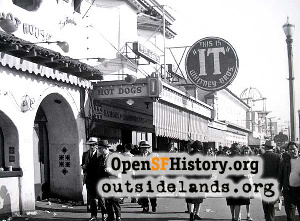 Hot House, "This is IT" at Playland at the Beach in the 1940s - Courtesy of a private collector

But me, I was four. I had a lot to learn. Maybe that's why one day Momma zipped my jacket up tight, made sure my shoes were tied, and off we walked down the Balboa Street hill towards magical, scary Playland.

We passed the brick apartment house at 47th and Balboa where my friend Lillian lived. Her father was in the Army, and her mother was too busy for children to come and play, so Lillian was by herself a lot. Maybe she was watching us from her window right now. Maybe she was wishing she was on an adventure like me.

Across the street was the red-roofed cottage with its rolling front lawn. Kids gathered there to play Mother May I on summer evenings as the fog drifted in. First you took three giant steps, then you took six midget steps, then you took eight caterpillar steps. You had to do whatever Mother said or else you were out.

A block further on, we entered a desolate region of sand hills. Covered with ice plant, lupine and the occasional rusting beer can, they stretched far to the north, all the way to Sutro Park. It was a lawless land where bullies roamed. I didn't know much, but I knew you didn't want to go up there without a bodyguard.

Below us, we could see the horseshoe-shaped scaffolding of the Shoot the Chutes. Once my big sister Shirley Jo and her pal Barbara took me on it. I climbed in the middle of the front car, Shirley Jo was on my left, Barbara was on my right, what could go wrong? The car clacked up the track. 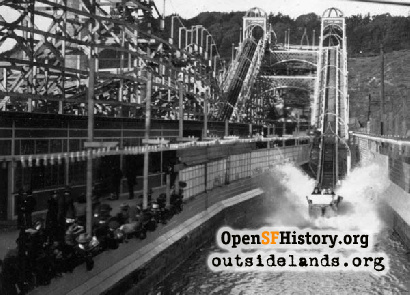 At the top, for a long moment, I thought I could see the mysterious land of Horizon. There were its purple mountains and towering clouds at the edge of the world. I could almost see its forests, its cities and its fruited plains—someday I was going to go there to see for myself. Then, with high-pitched shrieks, we thundered down the ramp at a hundred miles an hour, crashed into the lagoon with great skips and splashes and everybody getting doused with spray and hooray! I wanted to go again, but Shirley Jo was out of money.

I knew Momma would never take me on the Shoot the Chutes. She wouldn't go on scary rides. But there in its shadow was something nearly as good—the cars! Red, blue, green, wonderful cars, with headlights and horns you could honk, and and a firetruck with ladders and a bell, just big enough for me to possess for blissful, roundy-round moments. I waved at her as I chugged round the track and she waved back. Only four years old and already driving my own fire truck. 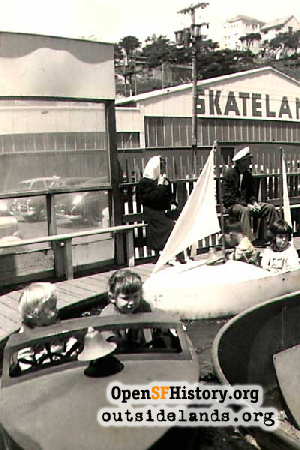 Playland boat ride with Skateland in background, Circa 1951. - Courtesy of Steven Faulkner

Later, maybe in 1947, the Whitney Brothers installed toy sailboats too, right next to the cars. Then, when I got tired of going around a circle in a car, I could go around a circle in a boat! That was progress. And there was Momma standing at the fence, looking proud of me—or maybe just looking cold, as the afternoon wind cut through her cloth coat.

On a great day like this, we might top off our trip with a candy apple from the hamburger stand beside the Big Dipper. I'd never actually eaten a candy apple, but the sight of other kids holding them filled me with desire. I would have walked all the way down the Midway for a taste.

Except I would walk down the Midway anyway. Everything about it was interesting. I liked to watch the sailors plinking at mechanical ducks paddling in a line across the green waters of the shooting gallery. I liked to watch the tough teenagers smashing baseballs into milk bottle pyramids. It looked so easy, but no one could ever make them roll off the stand.

Next came the Diving Bell. I was ten before I got the courage to go in it, under the ocean where sharks and octopi gathered with menacing looks and what if the glass broke? We'd all die and get in the newspaper. Then what would my mother say?

I also passed up the Laff In the Dark ride as long as I could, but finally, on Peter Walters' birthday party trip, I crashed through the iron doors of terror into skeleton-filled blackness. Why were the other kids laughing? Ahead of me was a blood-curdling Vault of Horror tableau of slime-covered monsters and giant spiders about to leap, cruel death and horrid decapitation, all to the sound of evil laughter and screaming souls in agony.

OK, so I was a sensitive kid. Maybe a crybaby. Even a scaredy-cat. But for weeks afterward, I had terror attacks whenever I thought of that tunnel.

Out where we lived by Ocean Beach, the nights were cold and foggy, even in the summertime. The other kids said never go out late at night because, after Playland closed, the drunks came up Balboa Street. In my mind I could see them stumbling and cursing, looking for little boys to eat, the fog swirling around so you couldn't see them till it was too late.

My bedroom window opened on to the tar-and-gravel roof of Jimmy's house next door. It was fun to climb around out there during the day and look down at cats in the vacant lot. But a cypress tree grew in that lot and, in bed at night, I was sure a drunk had climbed the tree and got onto the roof outside my window. In fact, if I dared look, I knew I might see a horrible bloody face leering at me and sharp fingernails with blood dripping down. A drunk!

The stand by the Big Dipper sold hamburgers and that kind of red caramel corn that came in a brick, but I was there for one thing only: a candy apple. So beautiful, gleaming with reflected blue-red light, glistening like Virginia Mayo's lips. And, when I tasted it…delicious hot cinnamon crackled in my mouth. But it turned out it wasn't really a candy apple. It was a regular apple with a candy coating, and, once you ate past the crackling cinnamon—it wasn't even a very good apple. It was a mushy one. In fact, the only thing worse was cotton candy, which looked like a luminescent pink cloud, but tasted like steel wool.

Momma said since I wanted that apple so bad, I had to eat it. So, with my disillusion on a stick, eating off the cinnamon and accidentally dropping the rest on the sidewalk, we turned around and headed past the streetcar turnaround up Balboa Street towards home.