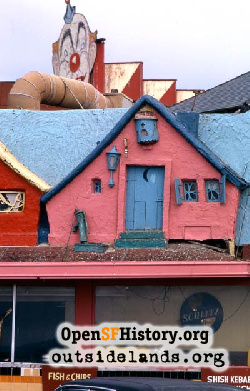 I don't know how old I was when I went the first time. I was the youngest and always trying to keep up with my older brothers. We were so excited, on our way to Playland at the Beach. It was across the street from the Pacific Ocean and most the time it was foggy, windy, and cold.

There were lots of great rides, like the Alpine Racers and the huge wooden roller coaster known as the Big Dipper. There was also a tall water tower structure that held a big metal box with windows called the Diving Bell. It would drop you under water so you could see the fishes and crabs. All I remember clearly is that I couldn't see anything clearly! Then of course there were the bumper cars. My brothers always ganged up on me and smashed me to the wall.

Because it was always so cold, my favorite spot was the Fun House. From the moment you stepped up to entrance—there was "Laughing Sal," a gap-toothed maniacally cackling giant doll—to the multi-story wooden slide, it was non-stop fun.

When you first walked in, there was a maze of mirrors. My brothers always tried to run and they'd end up bashing into a dead end and land on their bottoms. There was a man who sat at a control panel way up above everything like a great wizard. I never understood how he saw everything at once but he'd catch me every time. It was back in the days when girls (and moms) still were expected to wear dresses everywhere. One of the gadgets was a blast of air that he'd shoot at you when you'd least expect it. There were holes drilled in the floor in random places, and he'd wait until you were over one and then hit the air and send your dress up over your head. I started wearing shorts under my dresses after that.

There were a series of steps that you climbed while it rocked from side to side or up and down. I loved the giant record player. It was a huge round spinning platform that would hold about 30 kids. You'd always try to sit in the very center because as the guy in the booth spun it faster and faster, it would throw everyone off, skidding across the floor on their butts to smash into the padded walls. The last one to stay on would get a prize. The pièce de résistance was the the giant wooden slide. You would grab a burlap bag and start the climb. I never counted the stairs but it took at least five minutes to get to the top. The swooping ride was worth it. There were multiple lanes across, so my brothers and I would race. I never won because I probably weighed forty pounds soaking wet, but I never turned down a challenge! We'd finish up with a tumble through the rolling barrels and go have an "It's-it" bar. Playland was the only place you could get them back then. One of the owners had invented them.

We'd go home bruised and pooped out. I still dream about Playland at the Beach. It was torn down in 1972. It will live on in my heart forever as one of my favorite memories, one of those places where my brothers and I always had the best time.