The Joe from the Richmond's Joe's Ice Cream 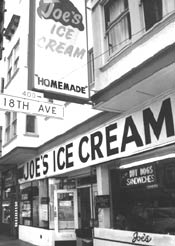 The "Joe" of Joe's Ice Cream owned the Richmond district creamery less than five of its 57 years of business, but had perhaps the biggest influence.

Joe Politz put in the black vinyl stools and the formica counters; he expanded the business by selling sandwiches, and turned a business that was barely getting by into a highly successful institution. We chatted with Joe on the phone and found it was no problem to get him started on his tenure at Joe's Ice Cream.

Joe used the milk cans to create an air of prosperity with the business before it actually got in the black. "I save up 40 or 50 of these jugs and put them out in front of the store in the morning. People would come by and say, "Hey, you must really be doing well to need such a large order!"

He modified a black Volkswagen Bug to promote the business, attaching a huge ice cream cone to the roof and taking out the front seat to deliver orders to restaurants. "We did really well selling spumoni to Italian restaurants."

Other promotions included a new ice cream flavor every day. "I think I was the first to invent bubble gum ice cream. Some guy wasn't selling these big gumballs for use in gumball machines and I ended up buying like 100 pounds of them. And I said, 'What the heck am I going to do with these?'" His inventiveness also created a true watermelon sherbet---complete with black seeds! "It took off," he laughed.

Joe prided himself on hiring neighborhood kids from broken homes, making sure they opened bank accounts that he'd deposit part of their pay into for their families. He recalled taking the staff out to Sunday meals at the "Flying Saucer" restaurant a few blocks down Geary. He remembered Herman's Delicatessen, and when the donut shop across the street was "Stanley's Stationary".

Joe sold the store to Mike and Ida Baum and ran D&M Liquors on Fillmore Street for 35 years before retiring in September 2001. He's happy the current owners, Aki and Mutsuhiko Murashige, have a new five-year lease and that the tradition continues. "I just had a lot of fun there."