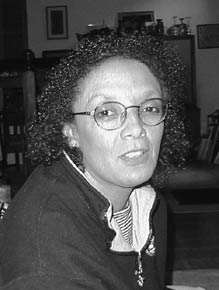 As a six-year-old Ingleside Terraces resident, Patti ended up being the "star" in one of San Francisco's better-known racial incidents. In 1958, she discovered a burnt cross on her front lawn and because her father was a public figure, local historians, reporters and columnists have over the years kept the tale alive:

"Herb Caen used to bring it up, and it used to embarrass the living daylights out of me. [...] He'd drag it out about every fifteen years... And it was usually when I was at work, so I would say, "Oh, that." I don't know who confessed to it, but I do know there was sentiment from other people in the neighborhood that didn't want us around."

Despite occasional incidents that came with being the first African-American family in Ingleside Terraces, Patti remembers a glowing childhood and great friends:

"I can't think of one really seriously bad thing about Ingleside Terraces. It was such a physically interesting place to grow up. I mean, I remember walking up one morning and Kathy standing outside going, "It's snowing," and we made snowmen, and the snow stuck for two days.

"The hail in July, you know. The Mark Twain famous thing about the coldest winter I ever spent was a summer in San Francisco, and it's true. But I mean, just thinking back on it, being able to see the Farallones, being able to hear the animals at the zoo. It was that quiet. I remember thinking, god, it's that quiet."

Patti remembers biking all over the west side, Playland, Stonestown, Fleishhacker's pool and zoo... With her best friend Kathy Cleary, she would put on neighborhood plays and musicals.

"We'd send out invitations and programs, and a couple of them we did on either my porch or Kathy's porch or we did them inside in the living room. We had a set staged and the whole thing. Oh, we did a Wagnerian one. We did the Ring Cycle. [...] We did Midsummer Night's Dream.

"I mean, we got about twenty people, and for that it's pretty good. Of course, our parents and then some other people in the neighborhood. It was really kind of funny. A couple of my mother's friends (would come), I think she probably threatened them, because I know they didn't live in the neighborhood at all, but they showed up." 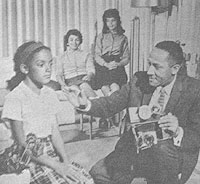 Being the daughter of a U.S. Attorney (in his career Cecil Poole served as San Francisco's Assistant District Attorney, the California governor's clemency secretary, and later as a judge on the Ninth Circuit Court of Appeals), Patti got to meet a wide-range of important figures from the 1960s---Robert Kennedy, Lyndon Johnson, Thurgood Marshall---but as she grew older having a famous father could be a drawback.

"I knew that if I got caught in anything, it would get blown up. I also had friends that said, 'Well, if we're ever in (an anti-war) demonstration or anything ever happens, I should get handcuffed to you, because you're the U.S. Attorney's daughter, and we'll all get out.'

"And I'd say, 'No, if you get handcuffed to me, you'll stay there a lot longer, because my dad will keep you there.'

"Dad knew, but when I would go to demonstrations at the Federal Building, I'd stay in the back of the crowd, because I would see the FBI agents out there taking photographs, and I knew that I was on their photographs. But I didn't want to be right there smack in the front, because I didn't want to compromise him, and that's kind of how I carried myself."

Some of Patti's fondest memories are of the wonderful craftsmen home she grew up in Ingleside Terraces. She's happy 90 Cedro Avenue has been recognized by San Francisco as a city landmark:

"I think it's great. I think it's kind of ironic that my dad's name is attached to it when the covenants of that neighborhood restricted anybody of color from owning a house, and that my father, himself, could not have bought that house with somebody, an individual, selling it to him. So I think it's rather ironic, and I think my dad would have been really happy with that."