The two final battles for Bay Area collegiate football supremacy to be held in San Francisco occurred in the Richmond District. 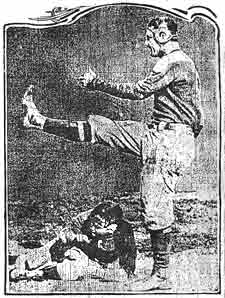 One hundred years ago, in the fall of 1904, the University of California and Stanford University varsity football teams faced off on the Berkeley campus for the first "Big Game" to be hosted on one of the respective school's grounds. But that wasn't the first meeting between the Bay Area's two collegiate rivals. It was the 14th time that the two schools had met in what had initially been called the "Intercollegiate Football Game" when it was first contested in 1892, and which by 1902 was affectionately called the Big Game. Neither school had a field that could accommodate the thousands of students, alumni and rabid rooters, so the first thirteen intercollegiate gridiron contests were played in San Francisco.

Since the first clash between the schools at the Haight Street Grounds in 1892, five different San Francisco sporting venues served as the field of honor for the intercollegiate football championship of the western United States. 1 More than a century ago the two final battles for Bay Area collegiate football supremacy to be held in San Francisco occurred in the Richmond District---figuratively in our back yard and literally in the back yards of several dozen unsuspecting current Inner Richmond residents.

When the cornerstone for the Maria Kip orphanage at 7th Avenue and Lake Street was laid on Sunday, October 4, 1896, the Richmond District hardly resembled the wall-to-wall residential neighborhood that it is today. Empty, wind-swept, sandy lots---even empty, wind-swept sandy blocks--- characterized much of this yet-to-be developed portion of the city.

In 1896 the center of the Bay Area's football universe was Central Park at 8th and Market Streets, where the Cal and Stanford elevens met in front of 15,000 spectators on Thanksgiving Day. The Sisters of the Good Shepherd, along with their scattered Richmond neighbors, could hardly imagine that six years later a plot of land literally kitty-corner from the Maria Kip Orphanage would be ground zero for thousands of football zealots.

From 1899 through 1901 the Big Game had been held at the Folsom Street Grounds at 16th and Folsom on property leased from the Mechanics' Institute. But in 1902 the property was sold, and as late as August, 1902, there was no field for what was now an annual San Francisco tradition. The San Francisco Chronicle reported that the two schools were considering a site in West Oakland, but noted that there was strong sentiment for the game to remain in San Francisco. 2

In September 1902, just two months before the Big Game, the athletic managers of the two universities announced that they had found a suitable location at 18th and Dolores Streets, formerly the site of a Jewish cemetery. 3 Bids for the construction of the bleachers had been received and with work about to commence it seemed certain that the football tradition would continue in San Francisco. However, a month later one of the Hebrew societies which owned the land announced that it had decided not to lease it to the universities. 4

At the eleventh hour it was doubtful that the game could be played in San Francisco.

Richmond District to the Rescue

On October 9, 1902, the Chronicle reported that for the third time that season the university athletic managers had "definitely decided" upon the location of the gridiron for the intercollegiate game. The savior who rescued the Big Game for San Francisco was Dave Brown, Stanford 1897, who had been the Stanford football manager in 1896, and brother of Everett Brown, Cal 1897. Mr. Brown, an Oakland civil engineer, had leased the block bounded by California and Lake Streets, and 7th and 8th Avenues from E.H. Winchester and Flora B. McDermott and then sub-leased it to the universities. 5

The site was described as "sandy"---an understatement to anyone familiar with the west side of the city. In a demonstration of either supreme optimism or terminal naiveté, it was asserted that the field could be readied for the Cal-Stanford Freshman game on October 18. 6 But four days later the reality of the Richmond District was acknowledged and the game's organizers admitted that it would take at least two weeks to make the field playable. 7

Consequently, the Freshman football teams were forced to play on the Berkeley campus on a field that was ten yards short. There was no stigma attached to the Freshmen for playing on the Cal field---the Golden Bear Varsity played and won its five other football games of 1902 season on campus. The "Baby Bears" won 12-0.

As carpenters began to erect fences, bleacher seats and grandstand coverings, and as horse-drawn wagon-load after horse-drawn wagon-load of clay and loam were dumped onto the sandy surface of the field-to-be, not unexpectedly, a "Not In My Back Yard" protest movement erupted. Fearing that the grounds "would probably become a nucleus of undesirable resorts", thereby adversely affecting property values, two weeks before the scheduled game, Richmond residents rose up and vehemently objected to the construction of the grounds before the Streets Committee of the Board of Supervisors. After a rancorous hearing a compromise was reached between the Richmond residents and the schools which allowed only three additional games to be played on Richmond Grounds, and stipulated the stadium would be removed by January 1904. Under these conditions the 1902 Big Game could proceed. 8

With all obstacles presumably overcome, and the only remaining concern being the possibility of rain on game day, four days before kickoff a controversy which had been percolating for about two weeks boiled over, threatening to cancel the Big Game. Stanford protested the eligibility of Wayne "Locomotive" ("Loco") Smith, California's "line-bucking back". Stanford alleged that Smith's stint as a paid coach at the University of Oregon in 1901 made him a professional, thereby rendering him ineligible to compete under the provisions of the Intercollegiate Rules agreed upon between Berkeley and Stanford in 1900. If Cal allowed Smith to play, Stanford threatened to "completely disrupt the athletic relations between the two schools", i.e. not play in the Big Game. 9

Cal had been aware of Smith's questionable status and presented the facts to the Pacific Athletic Association at the start of the season. The Association, to which both Cal and Stanford belonged, ruled in favor of Smith and Cal, but Stanford argued that the Intercollegiate Rules between the two universities took precedence.

On November 4, as Californians went to the polls to elect a new governor, fifteen impartial members of the University Club heard the facts of the case and ruled that Smith was indeed ineligible.

Predictably, the ruling was received with bitter feelings on the Cal campus. At a joint meeting of the Executive Committee of the Associated Students and the varsity squad, the possibility of withdrawing from the Big Game was discussed. It was suggested that the loss of big game revenue could be made up by scheduling a game with an Eastern college at a later date. However, cooler heads prevailed and Bobby Sherman was named to replace Smith. It was estimated that the loss of the veteran halfback would cost Cal at least six points. 10

On November 5, 1902, three days before the intercollegiate contest, the Daily Californian described the field:

The new football grounds near the Marine Hospital at San Francisco are the most picturesquely situated that were ever selected for the big Varsity game. They are at Seventh Avenue and California Street, about midway between the Presidio Golf Club house and the Marine Hospital, and are very close to the Maria Kip Orphanage.

There are splendid great grand stands for seating 13,500 people. The whole east side of the field is one great towering gently sloping hillside of substantial benches under cover, and the entire west side of the field will have similar seats without cover for the college rooters. 11

On a rainy Thursday afternoon, two days before the game, the Cal squad visited the Richmond Grounds for the first time. According to the Call, the players considered the field to be the poorest and slowest they had ever seen. Cal's athletic manager was planning to add another four inches of dirt to the surface and pack it with rollers to provide the best possible conditions for the game. But the final analysis was that if it rained before the game it would be impossible for the teams to indulge in any fast plays. 12

At a pre-game rally at Cal, the following appeal from the faculty was made to the student body still seething over the Smith decision:

"We have passed through a trying incident. I ask you that at the game next Saturday, as you value your own reputations and that of the University, you will do nothing which will bring disgrace upon us. Hold your tempers, hold your tongues. Remember, the field belongs to the victors. If Stanford wins let not one man of you step upon the field, but stay on the bleachers and yell as if you had won." 13

The Stanford ax was taken from its secure hiding place and displayed at the rally. Liberated from Stanford rooters at an 1899 Cal-Stanford baseball game in San Francisco, the ax was treasured by Cal as a priceless trophy.

(Click here or on the above image for a larger image in a new window.)

On Big Game Day, the Chronicle described the scene of up-coming battle:

There are seats for 11,500 people, and standing room at the north end of the field for 2,500 more, making accommodation for 14,000 spectators outside the actual field of contest.

The grounds are in the Richmond District, close to the Maria Kip Orphanage, a quarter of a mile in from the United States Marine Hospital, and are beautifully situated almost at the base of the hillside slope of the Presidio Reservation where the golf links are located. From the hillside hundreds of men and boys who have not $2.50, $2.00, $1.50, or $1.00 for a ticket may get a long-range view of the gridiron. 14