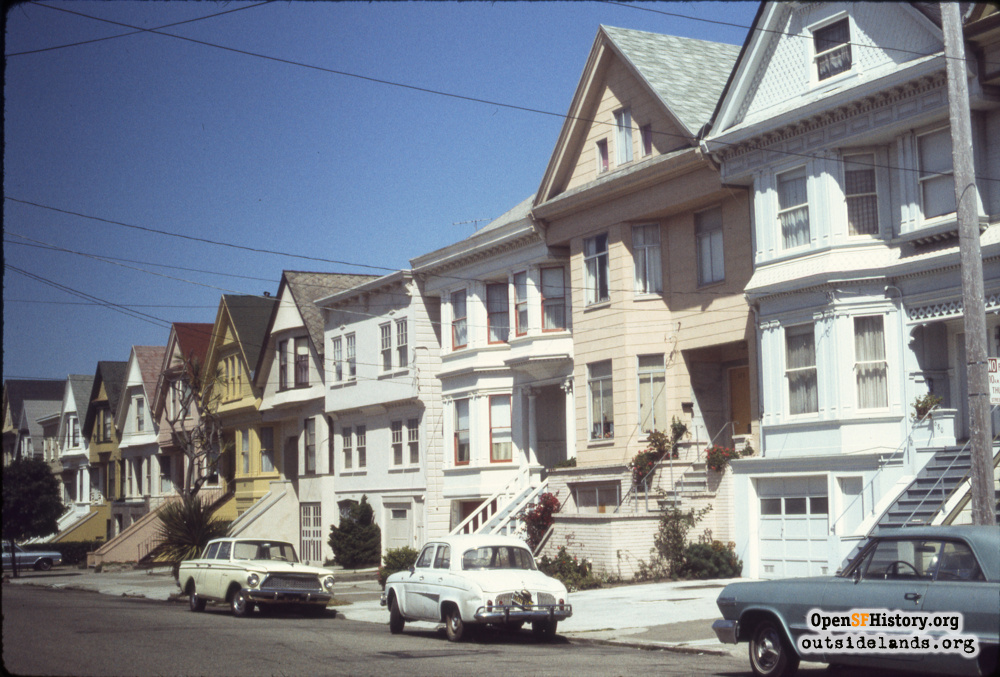 Between the Presidio and Golden Gate Park, from Lone Mountain to Ocean Beach.

The Richmond District lies between the Presidio and Golden Gate Park, and runs west from Lone Mountain to Ocean Beach in the northwest part of San Francisco.

Cemeteries had been established around Lone Mountain in the 1850s and 1860s, but very few people lived west of them in the foggy sand and scrub. In 1863, the Point Lobos Toll Road and Cliff House were built, bringing traffic and some roadhouses, racetracks, and dairymen to the area. Traveling west to visit the beach and view the sea lions on Seal Rocks became a popular weekend recreation.

In 1866, Congress passed the Outside Lands Act, officially adding the western half of the peninsula to the City of San Francisco and leading to the creation of Golden Gate Park. The park brought more weekend visitors and new transportation lines west, but full-time settlement on the sand and chaparral so remote from downtown was slow through the 1870s.

In the early 1880s, a nucleus of a growing residential neighborhood formed along Clement Street from Arguello to 6th Avenue. After being frustrated with the generic “Outside Lands” used for years, residents and real estate men began calling the area “Richmond.” One story for the origin of this new name is that early settler George Turner Marsh called his large home and grounds at the southeast corner of 12th Avenue and Clement "Richmond House," because the landscape reminded him of his hometown of Richmond, Australia. (Other sources credit a neighborhood booster named George Fletcher for suggesting the name.)

The Richmond experienced slow but steady growth over the next twenty-five years, with large institutions such as hospitals and orphanages moving into the area attracted by the relatively inexpensive available land. New cable and electric streetcar lines formed to deliver passengers to the park, to the beach, and Adolph Sutro’s new Cliff House, Sutro Heights, and Sutro Baths. After the 1906 Earthquake and Fire, the displacement of thousands of San Franciscans downtown and a refugee camp along today’s Park-Presidio Boulevard brought scores of new settlers to the area.

Between humble working-class cottages filling the rolling sand dunes, two of San Francisco's most prestigious residential enclaves were created. Baldwin & Howell made Presidio Terrace off Arguello Boulevard starting in 1905, and John Brickell Company worked with a number of firms to make Sea Cliff beginning in 1913.

By the 1910s, a local improvement group, worried the neighborhood would be overshadowed by the rise of the city of Richmond in the East Bay, had the neighborhood’s official name changed to "Park Presidio." So it was called in newspapers and many city records throughout the 1920s, but “Richmond” stuck with people. In 2005, the city changed the name officially back.

For years, the Richmond families were primarily of Irish and German ancestry, with a large Jewish population. In the 1950s, Chinese-American families began moving west from Chinatown. While there had been a "White Russian" community in the district for over sixty years, after the collapse of the Soviet Union in the 1990s, the Russian community in the Richmond swelled. Today, many maps identify parts of Geary Boulevard as “Little Russia.”