The tale of a storied roadhouse at San Francisco's Ocean Beach

The Carousel restaurant building, once home to Fat Boy BBQ and Doggie Diner on the corner of Sloat Boulevard and 46th Avenue, in late 2011 was finally demolished. Now a rumor has reached me that the Roberts Motel, the inn on Sloat Boulevard between 46th and 47th avenues, is perhaps close to the end of its days. 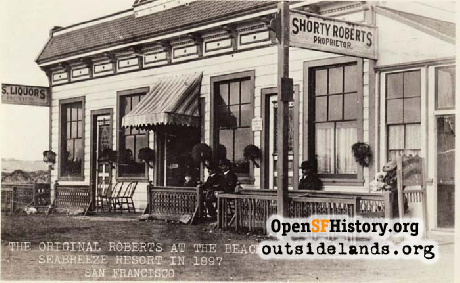 For about a decade I’ve heard of developer plans to raze the entire block the motel stands on, which would include venerable John’s Ocean Beach Café, Aqua Surf Shop and the long-closed shack that was once Leon’s Barbecue, to make way for condominiums with some ground-floor retail. Whether this plan is now imminent or another has been conceived, there are definite rumblings that change is on the way. Before the name Roberts disappears from the Ocean Beach area permanently, a review of the family’s long and colorful history along Great Highway is in order.

Dominic Roberts immigrated to San Francisco from Malta in the late 1860s. After operating a poultry business for 30 years, Roberts moved his large family (10 children) out to the Great Highway on the block between Rivera and Santiago streets, next to a roadhouse called the Sea Breeze Resort. Supposedly, the move was because of a doctor’s order for Roberts to improve his health with sea air. At the time, the Roberts family and the Sea Breeze had few neighbors, with miles of sand dunes behind them and just a few other roadhouses on the blocks north and south.

In 1897, Roberts sold his poultry business and bought the Sea Breeze, changing its name to Roberts-at-the-Beach. Between the roadhouse at 2200 Great Highway and his original land purchase (called “the ranch” by the family), Dominic Roberts had about five acres of property at Ocean Beach. When the patriarch died in 1910, his oldest son, Richard “Shorty” Roberts, took over and made the roadhouse a trendy destination for newspapermen, entertainers, boxers and racing fans.

Calling itself the “Most Unusual Place in the West,” Roberts-at-the-Beach cultivated a quirky, if fashionable, reputation under Shorty Roberts. A large four-sided fireplace of exposed stone dominated the lounge area with giant paintings of marine scenes on the walls. Long before Benihanas or fancy wood-fired pizza restaurants, Roberts advertised that meals were cooked in plain sight at another exposed stone fireplace, the “Fireplace Broiler.” 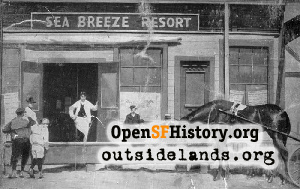 During Prohibition, Roberts stayed open, trying to get around the Volstead Act by not selling liquor, but rather allowing customers to bring their own drinks surreptitiously to the sociable roadhouse. Police Capt. Charles Goff announced in the San Francisco Call of Aug. 10, 1925 that “the carefully secreted hip flask is to disappear from San Francisco cafes” after he raided Roberts one weekend and found among the “throngs of fashionably attired men and women” a number of liquor-packing violators.

The food, location and popularity of Roberts-at-the-Beach somehow got it through the dry years, and in the 1930s there were once more crowds of drinkers around the ornate mahogany bar, which was carved with reliefs of “tally-ho” carriages: full stagecoaches drawn by a quartet of horses. Horses, especially racehorses, were an overriding theme at Roberts, with equine paintings everywhere and rocking-horse races held on the restaurant dance floor — the winner awarded a bottle of champagne.

The Roberts connection to horses was solidified in 1938 when Shorty Roberts made a bet with Bay Meadows operator Bill Kyne that Roberts’ horse “Blackie” could swim the Golden Gate. The horse made it across the channel in a brisk 23 minutes. (See the video!) Its owner paddled behind, mostly being towed by Blackie’s tail.

After World War II, the Roberts family began diversifying, starting a food-catering business, and in 1955 opened the motel on Sloat Boulevard and 47th Avenue. The family sold the motel in 1983, and despite the name hasn’t had any connection to the business since then. 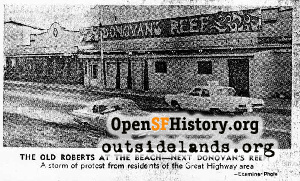 The original Roberts-at-the-Beach closed in the 1960s. In early 1967, two promoters, John Baeaza and Gino Del Prete, opened the building as the rock club “Donovan’s Reef.” The club was able to have a concert license for live music, but the city wouldn’t allow dancing (this sounds like the plot of “Footloose”). Part of the problem was Del Prete’s other business: operating the Condor club in North Beach, where Carol Doda was famous for dancing topless. Concerned Sunset and Parkside residents packed permit hearings, arguing against the former roadhouse attracting “the wrong kind of teenager” and possibly corrupting area youth. Mrs. Thomas R. Best’s comments in the Dec. 29, 1966 edition of the San Francisco Examiner were typical: “We don’t want the beatniks, the topless and the bottomless in here.”

Permit Reviewer Peter Boudoures sounded like the stereotypical out-of-touch adult of every teen movie when he was quoted in the San Francisco Progress saying that he preferred that teens did their dancing at home, like when he was a teen: “When we wanted to dance we had a few people in to listen to the radio or Victrola.”

Youth culture lost. The Board of Appeals denied the permit and Donovan’s Reef limped on a while longer, trying to attract crowds with free admission. The Turtles played for the non-dancing teens that March. Eventually the old roadhouse was torn down and a public-housing project erected in its place.

Thanks to the Bushner family, who lived across the street from Roberts and knew the family well, for sharing their memories. 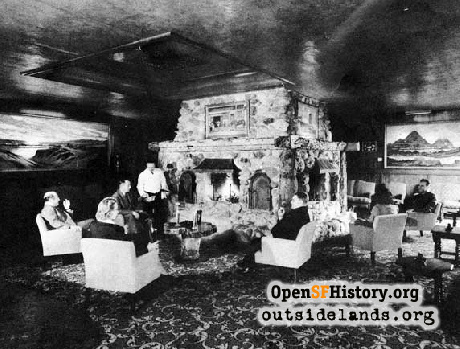