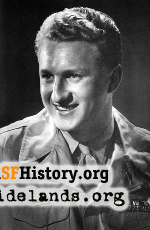 Ken Ross in his World War II days as a demolition specialist with the 101st Airborne. -

(Ken Ross, along with his longtime friends Normand Black and Carl Swendsen, is the author of We Didn't Know We Were Heroes, The True Stories of Three Friends in World War II. Ken kindly sent us some of his memories of growing up in the Richmond District.)

I remember one summer when I was nine years old, playing in the street when this fellow approached me and asked if I would like to make some money.

I said, "Doing what?" He said, "Selling magazines."

This was in the days of the old Liberty Magazine, 5 cents per copy. I said OK!

He gave me fifteen magazines and a shoulder bag. When I put the bag on it came down to my ankles, but George (that was his name) pulled up the strap until the bag came to just below my knees and tied a knot in it. He told me I would get two cents per copy for every Liberty I sold. George said he would check back with me on Friday to settle up. It was Monday.

I started out and sold out all fifteen copies in two days. I took the money home and my Mom put it away for me, and I awaited George. When George showed up he praised my enterprise and gave me fifteen more magazines. I excitedly started out again, but sold nothing the first day. The next day: nothing. I was steadily becoming very discouraged.

When George showed up and asked me how I was doing, I told him, "Gee, George I'm doing nothing. Everybody is saying no." George said, "That's good. You're getting all the no's out of the way early. It will be nothing but 'yes' from now on."

So I started out again and, sure enough, I sold all my magazines. That was my very first sales lesson and I have never forgotten it.

I met Carl Swendsen and Norman Black in the first grade at Star of the Sea Catholic School on Ninth Avenue between Geary and Clement streets. We have been lifelong friends for over seventy-eight years. We hung out together, went to movies together, and played pool together at Sarge's pool hall on Clement Street between Sixth and Seventh avenues.

Sarge had a bowling alley in his establishment on one side of the room consisting of three alleys with open pin pits. Carl, Norm, and I would make nightly forays to Sarge's and play a little pool and bowl a little. Sometimes we would set pins for Sarge for pocket change or for enough money for a movie. You talk about danger...

This was before the days of automatic pinsetting machines, so you had to reset the pins by hand. The pin pits were open, and you sat on a little swivel stool on the edge of the pit. When the ball hit the pins, you jumped into the pit to pull the loose pins, picked up the ball, and sent it back on a track to the bowler. With these open pits some times it was worth life and limb. A particularly active bowler could send the pins flying in all directions, so you had to be ready to duck.

Going to the movies was a Saturday afternoon pleasure. I remember my Mom giving me fifteen cents on Saturday: a dime for the show and a nickel for candy. I would dash down to a little store between Fourth and Fifth Avenue on Cornwall Street and buy a nickel's worth of Abba Zabba bars. They were taffy on the outside and filled with peanut butter. You could buy two for a penny. The kindly storekeeper would always throw in a couple of extra bars to make it an even dozen. All that, and a show; what an afternoon I had. I thought it was the greatest way to live. Of course, I had not discovered girls yet.

Most of the features were cowboy movies featuring all our western heroes: Tom Mix, Tim Tyler, Ken Maynard, Bob Steele, Hoot Gibson, and my all-time favorite, Charles S. "Buck" Jones. Once, at the old Coliseum Theater, Buck Jones made a personal appearance with his horse "Silver." Some of my friends and I arrived hours early and waited for the theater to open. We were first in line and rushed to our favorite seats down front on the right side.

When Buck appeared, the roar of applause was deafening and we were ecstatic. After we quieted down. Buck told us if we were real quiet and did not spook his horse he would bring him onstage and they would do some tricks for us. In the hush of the moment, Buck softly told us he would be right back and left the stage. It was all quiet, and I was sitting on the aisle in a front row seat.

I felt a presence and I looked to my left to see the biggest six-gun I ever saw in my life. It was huge. I knew I would need two hands just to hold it. I looked further up and saw this rugged looking man who leaned down and said to me: "Son would you hold my horse while I check the ramp to the stage?" He handed me the reins and I almost fainted. I held those reins as tight as I could. Then he came back, took the reins from my hand, thanked me, and, wonder-of-wonders, shook my hand.

I was in such a state I don't remember much after that, but I do know they performed some tricks and said goodbye. Buck had his horse bow to us before they left the theater. What a thrill for a nine-year-old boy.