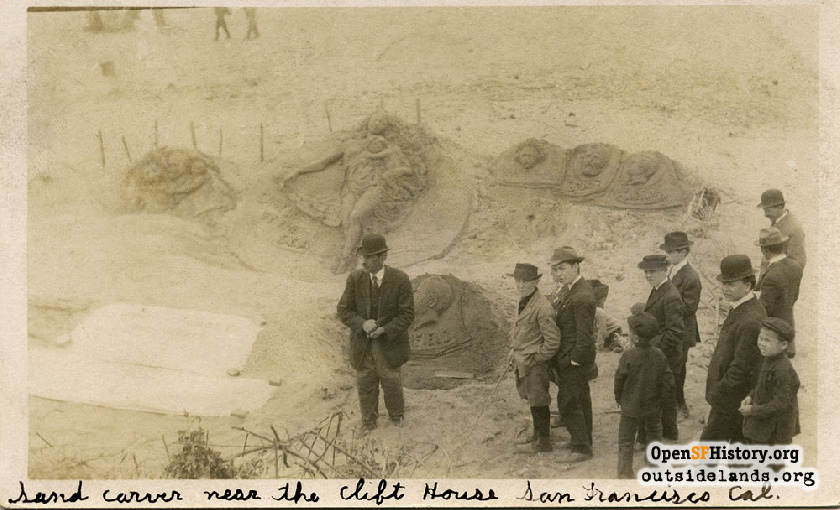 Castles in the Sand

Castles in the Sand 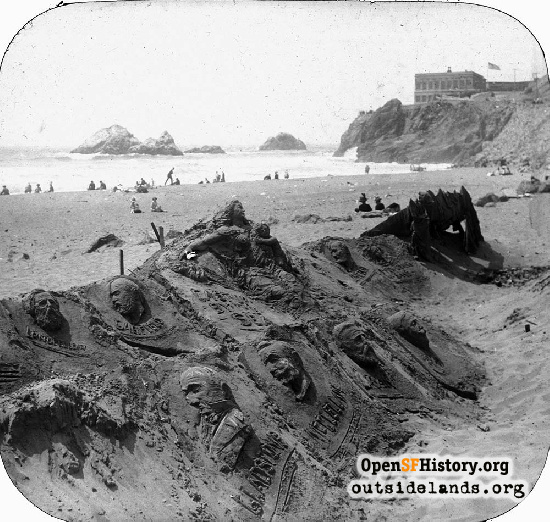 Elaborate sand frieze of famous figures, 'Cast Up By the Sea,' at Ocean Beach by James J. Taylor., Dec 1909 -

Every October LEAP, a local nonprofit dedicated to bringing Art and Architecture to Bay Area Schools, holds its annual Sandcastle Contest at Ocean Beach. I have immensely enjoyed this event in the past – it’s a wonder to me what a group of kids led by talented artists and architects can do with sand and water.

LEAP has held its sandcastle contest for nearly 30 years, but artists have been drawn to building sandcastles at Ocean Beach throughout San Francisco’s history. One of those artists, sculptor James J. Taylor, created his own ephemeral wonder on the exact same stretch of beach over a century ago. The San Francisco Chronicle described the scene on December 6, 1909:

A sculptor with an artistic soul and a facile hand astonished visitors to the beach yesterday afternoon by modeling various figures and portraits in the wet sand on the beach just south of the Cliff House. The largest and most remarkable was a heroic sized figure of a woman lying on her back and clasping a chubby infant to her breast. It was labeled “Cast Up By the Waves.” The portraits were those of Longfellow, General Grant, President Taft and other notable men.

The boys and girls who delight in making mud pies or sand pies on the beach were speechless with astonishment and asked the man to show them how to make such nice things. 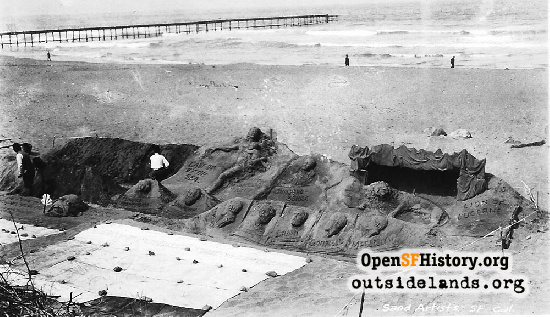 A postcard view of one version of James J. Taylor's sand sculpture at Ocean Beach, 'Cast Up by the Sea.', Dec 1909 -

“Cast Up By the Waves,” sometimes called “Cast Up By the Sea,” was a recurring piece for Taylor, who was born in 1860 and plied his trade as sand artist in the first decade of the 20th century. He did versions of “Cast Up” and similar creations in Long Beach, Asbury Park, N.J, and Atlantic City. Though the friezes of famous people rotated, they usually included Civil War generals.

Sand sculptors could make $20 to $30 in tips for their work, which took many hours and needed the right weather conditions. Taylor knew how to work the crowd, waiting until a decent number of onlookers had gathered at the beach before he would begin a piece. His signature reclined woman (often depicted clutching a child to her breast) usually acted as a centerpiece to his projects. The woman alone, her dress full of detailed folds and fabric-mimicking undulations, took Taylor about two hours to create. Taylor’s only tools were his hands – and a stick to finish off delicate details.

Taylor’s mastery was such that while sculpting one of his women, a passerby implored him to dig out the poor girl underneath before she smothered. 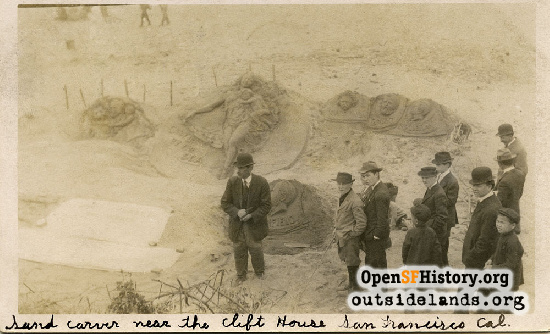 James J. Taylor, sand artist, at Ocean Beach below the Cliff House, with one of his creations., circa 1909 -

In 1908 and 1909 he toured California, complimenting the moldable nature of its sand compared to the sand on the East Coast, and dazzled the locals with his work.

Taylor didn’t mourn the fleeting nature of his chosen art form: “The material is still there and I can do the work again!” 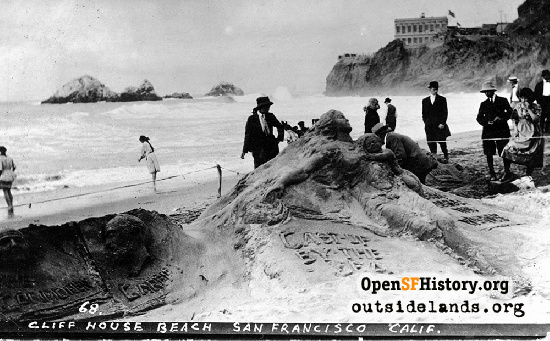