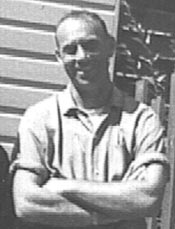 Not only is my Dad, Ralph Lester Selleck, a third generation San Franciscan, he has a triple connection to the western part of the city: he grew up and went to school in the Richmond District and has lived in the Sunset since after World War II; he worked for the Post Office, first out of station P in the Richmond District and then out of Sunset Station; and he worked weekends and holidays at Playland-at-the-Beach for 20 years.

As a child, Dad lived at 3rd and California with his parents, Morey and Louise Selleck, and maternal grandparents, William and Dora Davis. Half a block away lived his mother's sister, Goldie (Babe), husband Sam Silverman, and my Dad's first cousin Bobby. Since they were both only children, six months apart in age, the two were more like brothers. They went to Madison Grammar School, Roosevelt Junior High and then the old Lowell. (Bob eventually went to Stanford and moved to Orange County.)

Every Tuesday night my Dad and his parents went to see Morey's father, Jacob Selleck, at his house near Clement Street. Also there were Morey's brothers Abe, Monroe, and Sam, and his sister Irene along with her husband, Bob Robertson. The adults played pinochle while Dad played with his cousins June and Stan.

From 1934 to 1938, Dad delivered the Examiner to those on 3rd, 4th and 5th Avenues between Clement and Geary before he went to school. He was -- and is -- a baseball enthusiast and spent all of his free time (literally) out in left field. He played for Lowell and on Sundays at Big Rec for Owl Drugs or the Frank Newman Furniture Company. All that extracurricular activity makes a boy tired: "That's why I slept in school." While all that snoozing wasn't good for his grade point average, it kept him rested and refreshed for baseball. He went on to play for the Chicago Cubs' farm team in Visalia when he got out of the Army. 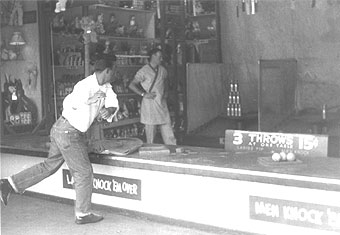 Before the War, Dad worked out of the Western Union office located on Geary between 18th and 19th. He would get 4 or 5 telegrams to deliver, go out and then come back for more. At first he delivered by bike, flying down the California Street hills (luckily there weren't many cars in those days). Eventually he graduated to delivering by car.

After he came back from World War II, he bought a home for his parents at 1770 39th Avenue for about $10,000. He got the money for the downpayment by sending some home each month from his Army pay. This house is not a typical Doelger home. It is a small two-level home with 2 bedrooms and a bath upstairs and the living room, dining room and kitchen downstairs. There was a small shopping area around the corner on Noreiga and their neighbors included the hard-drinking Big Margie next door and the similarly occupied Little Margie across the street.

He lived there with his parents, his mother's cousin Henny, and their mixed-breed German Shepard dog Butchie, bird Nicky and cat George. (My mother tells the story that when she first went over to Dad's house to meet his family, she was greeted by Butchie who took her purse, the bird flying overhead and the cat sitting on the kitchen table glaring at her.) Morey and Louise both worked at Weinstein's Department Store on Market Street, Morey as a shoe salesman and Louise in the Candy Department. ("Shoe salespeople in those days were nothing like now." says Dad, "They gave real service.") Henny worked in the hat department at Macy's.

Dad started working for the Post Office in 1946. His route was in the Outer Richmond, including Sutro Baths. His last stop was at the Cliff House. During his time there, he was met daily by a dog named Perdukie, a mid-sized mutt, who accompanied him on his route. When Dad was finished for the day, Perdukie went home (though Dad never found out where that was). People on his route told him that Perdukie never showed up on his days off.

Dad even had intrigue on that route. He was pulled over one day by 2 FBI agents, one named Mannon. (Initially he panicked thinking he was getting busted for playing the horses!) They were interested in a person who lived in a house on Seal Rock Drive. Every day for three months Dad would give them the person's mail and they would return it the next day so he could deliver it. After three months, the agents thanked him for his help, gave him a gift certificate for Roos Atkins (he bought a jacket) and were off. The man continued living there.

In 1950 Dad transferred to Sunset station on 22nd and Irving where he worked until his retirement in 1976. The day always started with donuts and coffee at the donut shop next door with his fellow carriers before heading out for his route from Judah to Moraga on 38th, 39th and 40th Avenues. There were no G-men or mysterious dogs on that side of the Park, although Dad was occasionally accompanied by his Father and Butchie and, once I could walk, sometimes by me.

Dad's proximity to his parent's home came in handy in March of 1957 when the City was rocked by a large earthquake, the kind where the lamp posts (and your legs) shake. Dad thought the posts were going to come crashing down. From a few blocks away he heard his mother calling him, stored his mail and went running. Fortunately, everyone was fine there. (Not so up at 25th and Lincoln where my Mother, 9 months pregnant with me, was being visited by her mother. Grandma Katz, originally from Hungary and having spent over 30 years in Chicago, was unaccustomed to having the earth move beneath her feet. She was unfortunately alone in the kitchen when it hit. Mom was downstairs in the basement doing laundry and it seemed forever until she could waddle up to calm Grandma.)

One day in the early 50s, Dad was walking after work and ran into a man who offered him a part-time job at Playland. So began 20 years of working Saturday nights, Sundays and holidays for $15 a week ($1.25 an hour). He left about 3 months before it closed in 1972.

He was offered a permanent job at the beach but wisely stuck to the security of the Post Office. He started out at the baseball booth and went on to basketball. "No one," he says, "went home a loser when I was working." Eventually he became a fill-in man for those on their breaks. He worked everything but the guns or the rides.

Looking back, Dad says that "toward the end it was really rough. I remember one night, we had these smocks on with money and this guy was giving me a bad time. He was giving the people a bad time. I said, 'Why don't you just leave?' He said, 'Make me.' I jumped over the counter, with the money in the smock shaking. The bosses are walking by saying, 'what are you doing?' and I said, 'I'm going to kill the SOB.' But he ran away and I didn't lose any money out of my smock!"

After they finished for the night, the workers had to walk about a block to turn their money in. Dad was about 5'9", 160 pounds. "One of the guys who worked the balloon game was Ed. He was in the Army the rest of the week---a lot of the part-time guys who worked there were in the Army. Ed was about 6'6" and 240 pounds, meek as anything. And he said, 'Ralph, you go in front because somebody might knock us over.' I said, 'don't worry Ed, if they knock me over, I'm going to tell them you're right in back of me!'"

When he worked at the Beach, Dad used to go to Nick and Ethel's restaurant, the Chicken Range. (After Playland closed, Nick came to work at the Post Office.) He also used to go to the Hot House where his Mother and Henny loved the tamales. The only thing that has survived out there is Louie's and the Cliff House.

Before he was married (and even after!), Dad spent his free time playing the horses at Tanforan, Bay Meadows and Golden Gate Fields. He also went to movies all the time---at the Coliseum, the Alexandria, the Harding, the Haight, the Surf.

Since his retirement in 1975, Dad keeps busy with his daily walk by his old haunts at the beach and up the hill past the Cliff House, accompanied by his mixed breed German Shepherd Frances. Sadly, his arm isn't what it used to be and he no longer plays baseball. He prides himself now on watching as many games on television as possible. In 2002, he saw 162 games! He still goes to movies (often at the Balboa) and plays the horses.

If there is ever a Western Neighborhoods' Derby, Ralph L. Selleck, long-time resident, civil servant and distributor of amusement park prizes whether you deserved them or not, would surely win the triple crown.