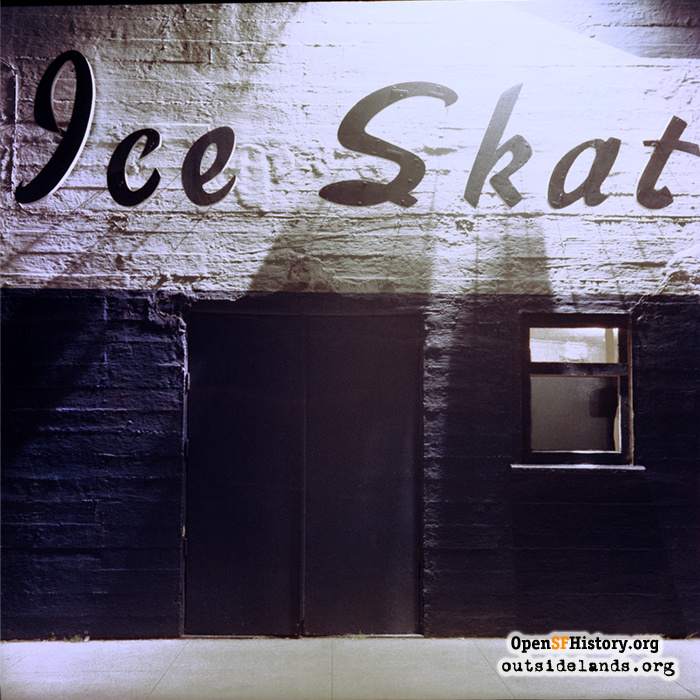 The story of the Outer Sunset's 48th Avenue Ice Rink


Plans and drawings for a new ice skating rink in San Francisco were presented to a group of potential investors at the Burlingame Country Club in September 1925. The rink was to be oval, without corners to "aid materially the execution of fancy skating and the dancing of the Continental numbers, among them the double turn waltz" that was so popular at the time.1 <> It was also supposed to be large, a third larger than the former Techau Ice Palace and stretching from 48th Avenue to the beach--perhaps to compete with the vastness of the Fleishhacker Pool.

It was built by the San Francisco Ice Rink Company as a private club in 1926, hence the "bunker-like" nondescript exterior. The ambitious size of the rink never materialized, only making it to 2/3 regulation size, but winter scene murals made up for the reduced scale. Nonetheless, the inaugural skating season was announced in a March 1926 advertisement in the San Francisco Chronicle that promised "unsurpassed motor parking" that was well policed. Of course there were ice skating lessons but the rink also offered live music by the Iceland Banza. A Clubhouse opened a few months later in May, managed by a New Yorker named John L. Frost who was apparently known for the world-famous "Jack Frost's Old Virginia Ham." The Clubhouse Salon featured "Helsinor chrome colorura decorations" by Eric Evanoff of the Royal Russian Academy of Arts, an artform and artist either so obscure or so misspelled that we couldn't find any additional information. The rink also featured the outfitting headquarters for A.G. Spalding & Bros.

The General manager was J.T. Ludlow, president of the Ludlow Refrigeration Engineering Company which installed ice plants and also grandson of Captain James Ludlow, who built one of the city's first homes on Market and Battery Streets. The summer it opened, the San Francisco Ice Arena was home to a newly organized San Francisco Amatuer Hockey Association. The first game held in July was the first time in ten years that a hockey game could be seen in the City; immensely popuar, it was standing room only. High school and college teams also played at the arena, and a 1927 advertisement in the San Francisco Chronicle boasts a Circus and Masquerade Carnival by rink employees featuring Charles and Dorothy Uksila, international skaters, and other acts.

Ludlow was president of the San Francisco Ice Rink from its opening until his death in February 1929 at his home, 1326 Third Avenue. Mrs Ludlow took over management of the Ice Rink but she wouldn't run the rink for long, selling it to Thomas and Lucinda Campbell (better known as "Ma Campbell) who was remembered as a pioneer leader in San Francisco ice skating at the time of her death in 1962. They closed the arena for a reboot and brought in a new manager named C.E. Hopkins, nicknamed "the daddy of California ice rinks." Advertisements promised new comforts, equipment, decorations and furnishings as well as an "unusual program of skating novelties" at the December 16, 1930 reopening.2 It must have been a successful night because he was immediately hired away to build elaborate ice rinks in Japan. 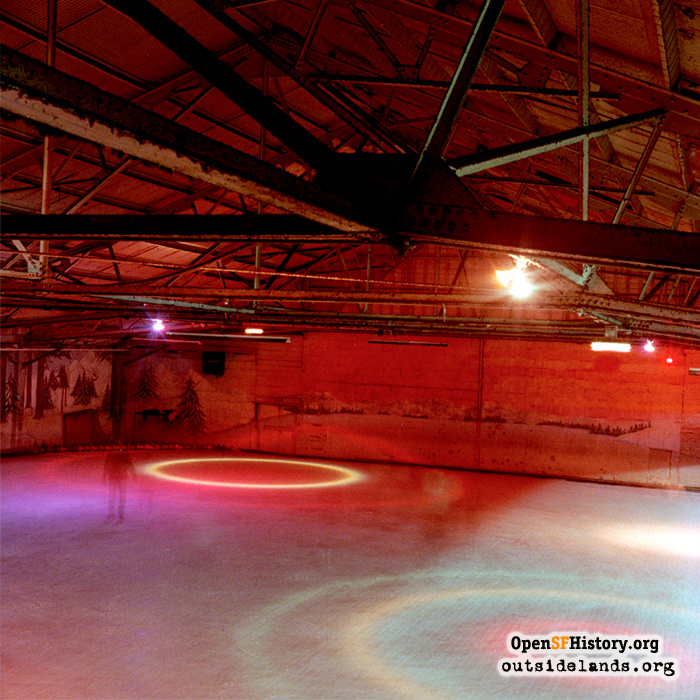 At some point, the Rink started selling alcohol much to the chagrin of the Francis Scott Key P.T.A. and other civic clubs and church groups. Lucinda was denied her renewal application to sell beer in April 1938, citing the selling "contrary to public welfare and morals" since it was mostly patronized by minors.3 Thomas had died the year before and this loss of revenue must have been a blow, but Lucinda carried on through World War II. In 1946, she made the Rink available for ambulatory veterans from Bay Area military hospitals to gather and skate through the Red Cross. She was a fixture in the neighborhood, living next door for 30 years, but she sold the rink in 1959 because the building was falling apart and ice skating was already an anachronism in San Francisco. At the time there were three rinks in the city (Sutro's, Winterland and Legge's on 11st Street) but just 15 years later, the rink on 48th Avenue would be the only one left.

Thompson sold the arena to Hugh R. Hendrickson and Marlene Jackson, former Ice Follies stars who worked as instructors giving lessons, and her husband, Joseph Thurston. Joe was a stock broker who never cared for ice skating, but he was the money man while Hendrickson ran the business. They immediately undertook badly needed renovations. In August 1959, Hendrickson was inspecting the ice plant with former manager Charles J. Himes when tragedy struck. As the two made their way through the brine room, Hendrickson held an electrical light for sight. When the pump kicked on, it splashed water up from the brine tank and onto Hendrickson. The cord started to smoke and he fell to the floor. Himes unplugged the cord and tried to revive him, but the 31-year-old husband and father of two was proclaimed dead on arrival at Park Emergency Hospital.

Marlene remembered, "At that point it was sink or swim. We had the money in it, but we had no more Hughie who knew how to build the rink. We had to get it open. Thurston gave up his job as a stockbroker and thought, 'Let's just try to maintain what was there. It's a happy business. That's why I kept it open. People came out here to have a good time.'" Yes they did. Through the 1970s, the Ice Arena was home to the Skating Club of San Francisco and a home away from home for local teenagers. Employee Arthur Howard remember in 1986, as rumors began to circulate about the Arena's closure: "We grew up here. We worked out, we met girls and our parents knew we were safe with the Thurstons and that we weren't doing drugs. It was--and still is--just good, wholesome fun."4

But operating an ice rink in San Francisco wasn't profitable anymore, although it was certainly still popular. Even as the Thurstons began to acknowledge they might have to close, Marlene brought on seven more instructors to keep up with demand and most of them were former Ice Follies stars including the Thomas Twins, Mary McDermott, Jane Sullivan, Dan Henry, Tony Howard, Cathy Young, Mark Hull and Bianca Colombini. The San Francisco Chronicle heralded Joe Thurston as a hero for keeping the place open, but he demured, "We do it for love." That "we" included the couple's sons, John and Charlie, who also worked to keep the rink open from 7:30am until 10:30pm every day. Thurston recalled, "Lot's of people think we're stupid, but we still hope to keep on running this place for as long as we can."5 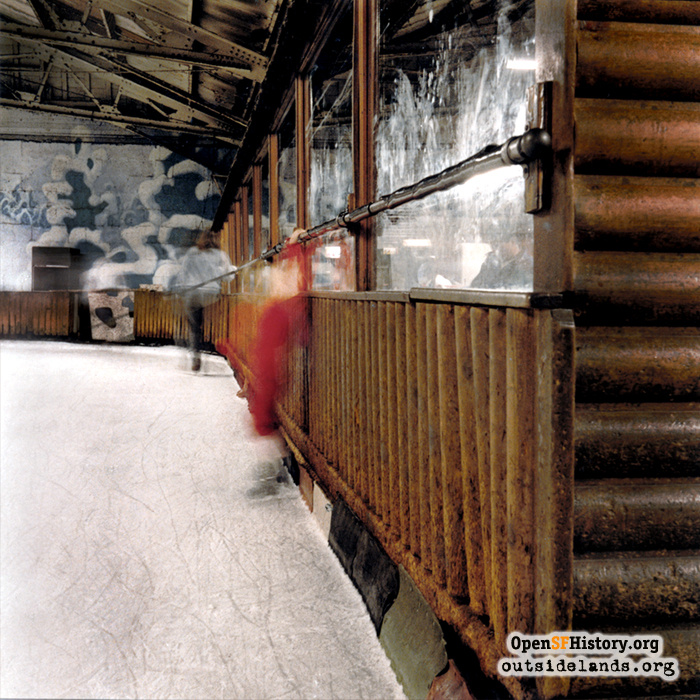 Admission in the late 1980s was $3.50, $1 for skates. Days were filled with hours set aside for adults only, children's and adult's classes, private lessons and public skating with schedule time for school and church groups. There were birthday parties in a special room decorated with playful murals featuring Hannah Barbara-esque characters. There were also private skating events and Joe Thurston remembered a Christmas in July party hosted by a San Francisco socialite that installed a 24-foot decorated tree in the center of the ice; they just left it up through the holidays that year. After closing, it was not uncommon for neighborhood regulars to hang out and play informal broomball games.

By 1989, birthday parties were really the only active promotional gimmick the Thurstons had left and the rink hand't made enough money in 30 years to pay for all the necessary repairs. Seismic upgrades, a dilapidated plant and a leaking roof added up, along with soaring insurance rates that forced the Thurstons to stop carrying a liability insurance policy altogether; the writing was on the wall, or at least on several signs that read "No Insurance!" But the neighborhood wasn't ready to let go. The City had twice tried to rezone the lot for housing but backed down in the face of neighborhood opposition. A citizens campaign spearheaded by Karen Wood was launched in March 1990, delaying the Thurston's plans to close and demolish the rink to build five 3-unit apartments. Not because they wanted to, but because they had to.

A Miraloma Park parent whose son skated, Wood was able to get 1,200 people to sign a petition to save the San Francisco Ice Rink and the the support of fAngela Alioto, Terence Hallinan, Bill Mahar, and Willie Kennedy from the Board of Supervisors. Assemblywoman Jackie Speier tried to find state money to cover the cost of repairs estimated at $3.5 million, and Mayor Art Angos asked his staff to explore other options to save it. The San Francisco Recreation & Parks Department was skeptical, however, since the rink wasn't regulation size and it was located in a residential neighborhood without dedicated parking. Long gone was the "unsurpassed motor parking" advertised when the rink opened in 1926. Ultimately, the last place to ice skate in San Francisco (at the time) was torn down on July 8, 1991. 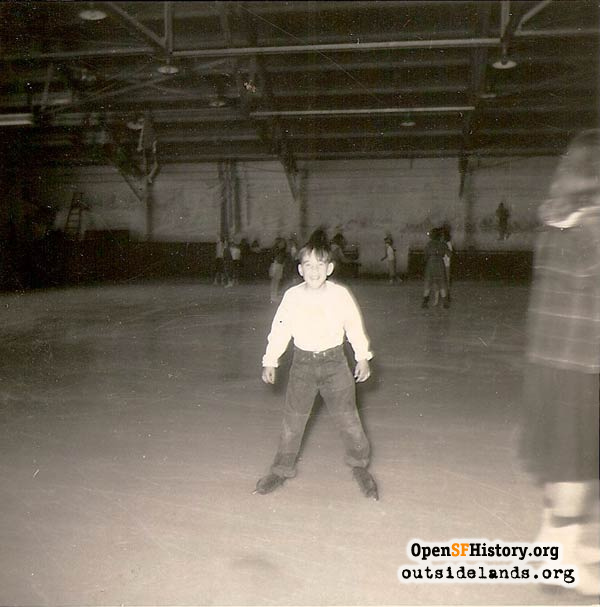 Three generations of the Thurston family were present for the demolition. When the San Francisco Ice Rink finally fell, it was the oldest operating arena in the country. It had either hosted or launched the careers of many famous skaters like Yvonne Gomez, who learned to skate on 48th Avenue as an eight-year-old, went onto the 1998 Calgary Olympics, and was on a national tour with Brian Boitano when news of rink's impending closure first hit the local news circuit in earnest in 1990. Peggy Flemming, Tai Babilonia, Randy Gardner and Dorothy Hamill all came to the Sunset to skate.

The memories, however, still remain. Before the wrecking ball came through, the Thurstons allowed San Francisco Art Institute student Darcie Westerlund to photograph every nook and cranny of the building, from the rafters to the brine room, for her senior thesis in 1990. Selections from her portfolio are on exhibit at our Home for History from December 7, 2019 to March 21, 2020, giving visitors a chance to reminisce about their experiences at this beloved neighborhood hangout.

Were you one of the cool kids who spent time at the Ice Arena on 48th and Kirkham, or maybe a parent who enrolled those kids in lessons? We'd love to hear your stories, see your photos too.


Sources not cited in the text: