The San Francisco Zoo was established in 1929, and built in the 1930's as part of a Works Progress Administration (WPA) project.

The San Francisco Zoo was established in 1929, and built in the 1930's as part of a Works Progress Administration (WPA) project. The Zoo was originally called the "Herbert Fleishhacker Zoo," after its founder, a well-known philanthropist and civic leader.

The official name--The San Francisco Zoological Gardens--was adopted in 1941, at Fleishhacker's suggestion. The first Zoo director was George Bistany, a former wild animal collector and well-known animal importer who was appointed after he delivered many of the Zoo's first animals, in 1929.

After Bistany's death in 1935, noted zoologist Edmund Heller served as Zoo director until his death in 1941. He was responsible for acquiring land and overseeing the WPA project. The architects' goals were simple: the Zoo had to be fireproof, permanent and easy to maintain at low cost. The building material could only be reinforced concrete, and the visitor should have an unobstructed view of the animal. What a difference from our goals today!

Now we strive to provide spacious, naturalistic homes for the animals, taking into consideration all kinds of factors, including manageability and safety for our animal staff, and the opportunity for visitors to see animals displaying their natural behaviors. The original architects did succeed in providing permanent exhibits, though. In our quest to renovate the outdoor elephant enclosures, we encountered concrete poured seven-feet deep in the flooring!

The major portion of the present Zoo was completed in 1940 at a cost of approximately $3.5 million. There were 10 structures including the Pachyderm and Lion Houses, large Aviary, sea lion pool, bear grottos, Monkey Island, a lake for aquatic birds, pools for otters, beavers and turtles, a restaurant and a plaza with a fountain. The barless pits used to house animals were considered innovative when compared to fenced cages popular during this period.

Some of these structures, such as the Lion House, the bear grottos, the Elephant House, the fountain and the seal pool, still exist and over the years have undergone extensive renovations. As we rebuild the Zoo, we have kept a historical perspective, striving to preserve historical icons such as the hand-carved wooden Dentzel Carousel (1921), the Little Puffer miniature steam train (1904), and the Mother's Building (1925). 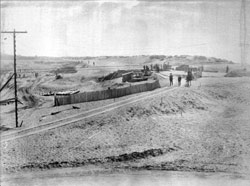 The Zoo has experienced tremendous change. Over the years, mechanical kiddie rides have come and gone, Storyland was established and later evolved into the present Children's Zoo. Other dramatic changes included the development of natural habitats for animals, and a major shift in emphasis from entertainment to education.

While remnants of the historic Zoo linger, today's Zoo represents an enthusiastic new attitude towards environmental conservation. As we reflect on the past, we look forward to the great changes that are taking place.