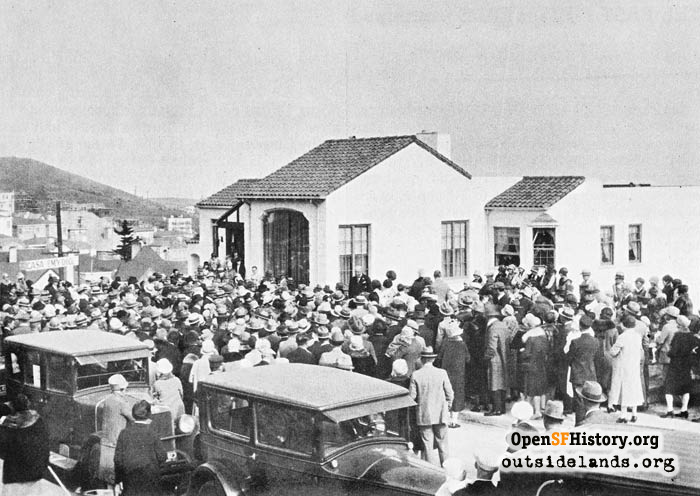 San Francisco's Ingleside parish birthed by the 1906 Earthquake and Fire.

by Woody LaBounty
Originally appeared in the Ingleside Light, November 2012. 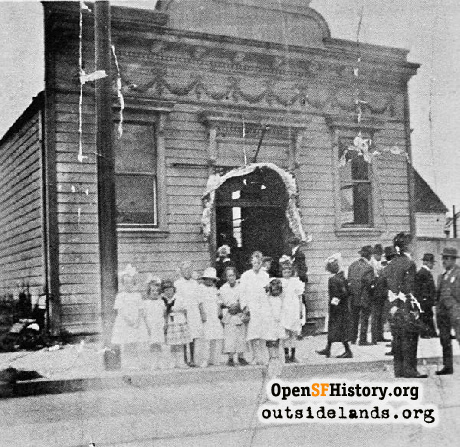 Hall owned by Barney Farley on the west side of Brighton Avenue, just south of Ocean Avenue, 1910s., circa 1910 -

From the nineteenth century into the first years of the twentieth, most Roman Catholics in the southwest quarter of San Francisco had a very long trek to attend mass on Sundays. A majority of the Irish railroad workers, Italian farmworkers, and Swiss dairymen making up the meager population of the area were Catholic, and the closest weekly mass was a three-to-six-mile walk to St. Paul's on Church Street in Noe Valley. In the Ocean View, on Broad Street, the small mission church of St. Michael's (named after the Mexican-era Rancho San Miguel of which it was a part) was established in the 1880s, but it had to settle for a priest coming up on horseback from San Mateo just twice a month to baptize babies, hear confessions, visit the sick, and offer mass.

For about a decade from 1889 to 1900, Catholics in the vicinity of today's Ingleside neighborhood could celebrate Sunday mass at the Industrial School, a nineteenth-century version of juvenile hall, and now the site of City College's main campus. But a real church in the rural landscape, a place for weddings, funerals, and the Catholic community to gather, would have to wait for a change of ground-shaking proportions.

On April 18, 1906, an earthquake and three-day fire destroyed San Francisco's downtown, North Beach, Russian Hill, and South of Market neighborhoods. Some 300,000 souls found themselves at least temporarily dispossessed from their homes. The Ingleside had an immediate spike in population with the establishment of a refugee camp on the grounds of the Ingleside Racetrack. Over the next few years, while San Francisco's core was being rebuilt, many families resettled on the weedy lots between the racetrack grounds and the Mission Road (today's Mission Street) leading to downtown. A 1963 history from a local author noted: "The people who settled in the district were, in most cases, in moderate circumstances, who owned their own homes and were proud of their somewhat isolated community which was increasing daily. There were about three hundred Catholics, including one hundred and twenty-five children, residing here at the time. These people who had lost everything could buy a lot for $10.00 down and $10.00 a month."

In many ways, the great destruction of San Francisco's earthquake and fire of 1906 created the Ingleside neighborhood. Adolph Sutro had subdivided the land south of the old Ocean Road in 1890, but fifteen years later the tract had only a handful of humble cottages and saloons, and most residents depended on the business of the Ingleside Racetrack, which had closed for good in December 1905. But then the refugees arrived, and in the first decade after the 1906 disaster, the Ingleside's population increased five-fold.

The growing Catholic community at first held church activities in homes or businesses. Barney Farley, a longtime local character who made his living selling liquor, running dog fights, and training boxers, offered a small gymnasium building he owned on Brighton Avenue just south of Ocean Avenue. Catholic priests from St. Michael's and St. Peter and Paul's in North Beach made the journey to offer mass.

In 1910 and 1911, a concerted effort for a church to be erected began in earnest. Local Catholics formed a building association, with over 100 members paying a quarter a month in dues. Fundraising through luncheons, picnics, card tournaments, and talent shows helped in the purchase of lots on the southeast corner of DeMontfort and Ashton Avenues. The prizes offered at one picnic demonstrate what was valued by residents of a suburban neighborhood with little infrastructure. The "Married Men" race winner received a five-gallon can of coal oil—used for heating cooking stoves—while first place in the Building Society race won a quarter ton of coal. 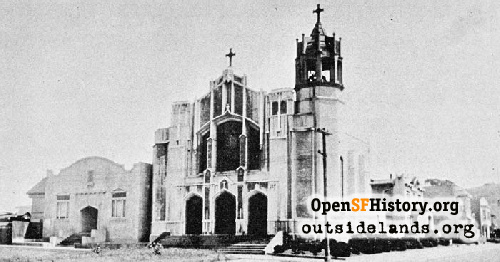 In 1913, the Archdiocese rewarded the hardworking community by creating a new parish around their planned church. Both the church and parish, seeded with refugees from the disaster of 1906, were appropriately named after the patron saint for deliverance from earthquakes, St. Emydius.

(The name, pronounced "Em-ee-dee-us," has caused endless hours of clarification for parish workers doing business with outside contractors and services. Spelling variations in the parish files of receipts and correspondence go from "Emydens" to "Enynidus" to "Mimydius.")

While the church building was under construction, three cobbled-together shacks, used as a public school at Plymouth and Grafton before Farragut School was opened, served as the first St. Emydius church. Barney Farley's gymnasium continued to serve for catechism classes and socials.

The handsome Tudor Gothic style church with wide entrance steps and a single corner tower opened in 1914, but it took only a decade for the congregation to outgrow the building. A 1920s fundraising campaign for an even bigger St. Emydius featured the raffle of a brand new house in Monterey Heights. Every parishioner had to sell or buy $20 in raffle tickets. The Spanish-Revival style "Casa Emydio" was won by Mrs. Wilhelmina Plamondom on December 15, 1927. 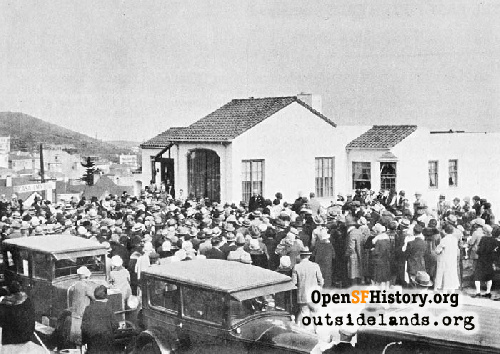 New house in Monterey Heights at 245 Brentwood Avenue, raffled off in a fundraiser for St. Emydius Church., 1927 -

On February 28, 1928, the new St. Emydius, a golden-domed, twin-towered structure modeled after the Cathedral of Guadaloupe in Mexico City, was dedicated. It still stands today. The church's 800-person-capacity was tested over the next forty years as the surrounding neighborhoods filled with new homes and large families. Over 4,000 Catholics lived in the parish in 1939 and that fall a parochial school opened at St. Emydius with 236 pupils. The parish population doubled after World War II and the church/school complex expanded with the addition of a gymnasium and adjoining land for a school playground and parking lot.

The parish that owed its origins to a great earthquake faced a more metaphorical shifting of the ground in the 1960s and 1970s. Already reduced in size by the creation of the new St. Brendan and St. Thomas More parishes, St. Emydius found itself at the epicenter of a neighborhood changing identity. Catholics began moving out of the Ingleside, replaced by other Christian denominations. Church attendance by Americans, especially in cities, began a long decline that continues to the present day. The Archdiocese closed many parish churches and schools beginning in the 1990s. St. Emydius's school, after more than sixty years of existence and graduating thousands of students, closed in the early 2000s.

Despite the tumult, the church building was recently renovated and retrofitted. The familiar golden towers of St. Emydius still shine, and the parish will celebrate a hundred years of serving the Ingleside in the spring of 2013. 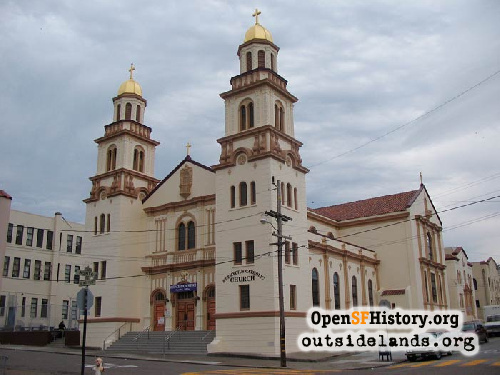