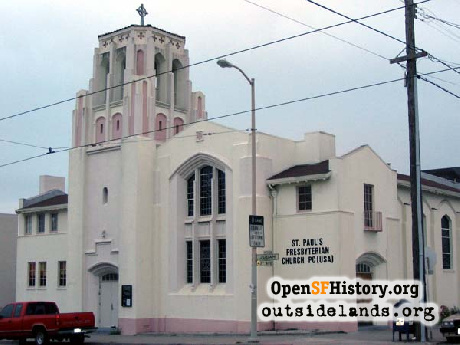 The following appeared in Sunset Magazine's October 1907 issue. The words and photos describe how St. Paul's Presbyterian Church arose in the sand dunes of "Oceanside," today's Outer Sunset District. Owned by the powerful Southern Pacific Railroad, which had more than a casual business interest in San Francisco's recovery, Sunset Magazine loved to highlight the determination and ingenuity of San Franciscans rebuilding their great city.

St. Paul's Presbyterian church still stands on the corner of 43rd Avenue and Judah Street, but with a "new" new building.

There has been no more characteristic expression recently of that subtle, intangible and quite indescribable something which goes by the convenient name of "the Spirit of '49" than the manner in which Saint Paul's Presbyterian church of San Francisco was built. It was the first permanent church erected in the city after the great fire. This little sanctuary stands by the sea, in the heart of a thriving settlement of homemakers, once "Carville," now Oceanside.

By some divine alchemy love of home and love of church are usually found in close affinity, and the people here having made their homes, the making of their church followed logically and naturally. But it required the greatest disaster in history to reveal how much these people really desired to have a church. The "before the fire" method of building it was the novel one: raise the money by solicited subscriptions, let the contract and on an appointed day open the sanctuary with debt-raising, thanksgivings and congratulations. This method was in use and gave promise of success when the disaster came, and the building fund—which was as yet on paper—went up in smoke. 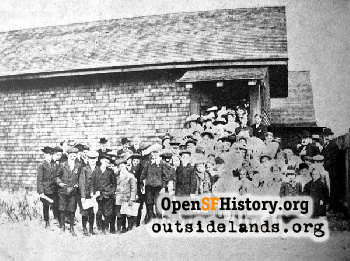 Less brave hearts would have seen in that calamity unanswerable argument against proceeding with the church building project, and would have put themselves to sleep with that too carelessly used anesthetic labeled "providentially hindered." Not so these stalwart souls. It was a marine engineer who first said "Lets build the church ourselves." Being a seafaring man, he had weathered storms before and by sheer perseverance had reached the harbor. The fact that the building enterprise had been struck amidship and seriously damaged, was not a sufficient reason in his mind why the vessel should be abandoned. His confidence was contagious—as confidence always is—and all hands set to work. The Presbyterian Reconstruction Committee, which had received some money from eastern friends for such help, was appealed to and enough ready money was granted to pay for the first load of rough lumber. The word rapidly spread that volunteers were wanted to build "the first church at Oceanside." And volunteers came. Literally, from every direction, representing nearly every shade of belief, and from nearly every trade and profession, help came. Men and women, boys and girls joined hands and hearts in the work. Many times the men worked until the near approach of midnight. Those who could not work brought money for the material. The smallest subscription calculated in a purely financial way was fifteen cents—the entire savings of a tiny member of the Bible school.

After ninety days—or, better, nights—the work was done and the church was opened. There was no debt-raising, for there was no debt to raise. Cheerful giving of that which each one had to give—money, or brain, or brawn—had paid the bills before they were made, and the treasurer had about twenty dollars left.

Here endeth the first chapter of this story, but the second is like unto it.

The congregation that filled the little church at that first service betrayed no sign of fag. The successful completion of the building was a matter of congratulation, to be sure, but no sign of relief showed itself. These people were determined not to be "weary in well-doing." It would have been too bad to let this good spirit "die young" for want of something to feed on. Besides, there was a need for something more than a house of worship. The boys of this settlement by the sea ought to have a place where their boyishness could find clean and rational expression. 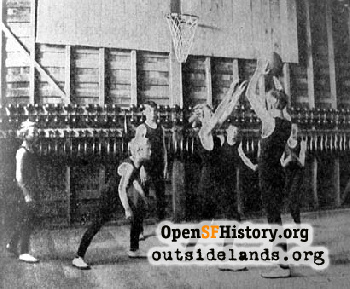 Somebody had blundered by buying twenty thousand shingles more than were needed for the church. But this blunder was soon seen to be a blessing in disguise. There were the shingles, there was the vacant space back of the church and there was the logic of the situation—a gymnasium ought to stand there. The boys caught the fever; a dozen of them called at the minister's house one evening and asked if they could help. Of course, they could help. Every boy subscribed what he could then and there, and pledged the strength of his right arm and his left, too—to the work. He pledged something else—a young boy's irresistible power of persuasion in a systematic campaign to raise money for the lumber. Every boy was armed with a subscription paper and assigned a clearly prescribed territory. Not a house was passed by, not an unsuspecting pedestrian was overlooked. Mirabile dictu—there was a demand for subscription papers by the boys. After the first distribution, an exceptionally miniature specimen of the genus biy knocked at the minister's door before breakfast and asked that he be given a paper and assigned a territory. Before the minister could frame a diplomatic refusal, he surrendered unconditionally to this half-plea and half-command:

"You'd better give me one. I'm lucky and I bet you I'll make a raise."

And he did! That very evening he returned with a pocketful of money—twenty nickels—and the next day with twenty more. When this gleaning was done, he induced his grandmother to make him a carpenter's apron, and with a discarded hammer properly hanging in the hammer strap of his apron, he took his place among the boys who had already set to work after school to raise the walls of the gymnasium.

Not quite that, for a carpenter laid out the frame and raised it with the help of the boys. The roof and the walls were covered with shingles, which was just the opportunity the boys were looking for—there were thousands of nails to drive!

Two weeks before the work was done, November 30 was set for the opening night. To get ready for this, night work was necessary, but the young builders did not hesitate at this. By the free use of large lamps the opening night found the building finished. 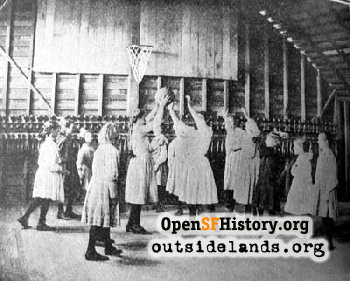 What a happy night it was! The rough interior had been made surprisingly attractive by a profusion of greens and flags. The building was filled with the parents and the friends of the energetic and persevering fellows who had worked hard to make their dream real. The Columbia Park Boys' Club Band was present and the Oceanside Boys' Club was launched to the strains of martial music!

But what of the aftermath?

When the chairs and the flags and the greens had been cleared away there remained an empty building—which by faith was called a gymnasium—and an empty treasury. But the boys were not far away. Some fellow suggested that the place would make a good skating rink until it could be fitted up with gymnastic apparatus. It was an inspiration—and a skating rink it became for boys and girls.

After a period of wondering and planning about how that much coveted apparatus could be bought—for that couldn't be made—two liberal friends of all good works who had made the boys' hearts glad before in their building enterprise, made them shouting happy by furnishing the gymnasium. To secure the intelligent use of this, the church—which had been steadily growing all the while—guaranteed the salary of a physical director for a weekly class. So steady has been the growth of interest, that it has recently become necessary to establish a waiting list of applicants for admission to this class. And then a class of girls under a trained woman director was organized, to which are admitted the faithful ones in the sewing school established and conducted by Saint Paul's Guild of Women—the wide-awake women's organization of the church.

And that is the story of how the first permanent church was built after the fire in San Francisco. In San Francisco mind you, where if "there ain't no ten commandments" there are at least two: "Thou shalt love thy Lord thy God" and "thy neighbor as thyself."

Note: Mills College alumna Cindy Price suspects the author of this article was likely the father of Lynn Townsend White, Jr., Mills College president from the 1940s and 1950s.