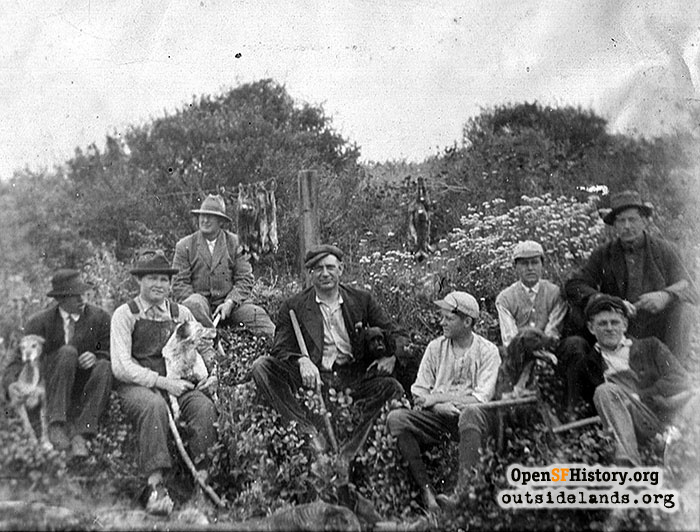 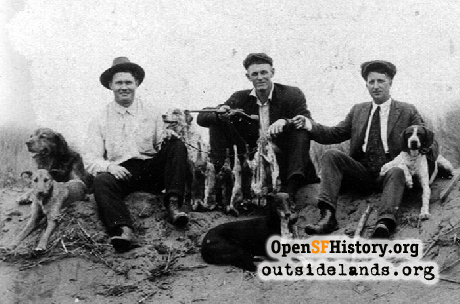 George R. Stanton, center, with friends and dogs after rabbit hunting in the Sunset sand dunes. Possibly Charlie Williams on left., circa 1917 -

On January 5, 1984, George Stanton wrote a letter of condolence to the widow of Harry Wallenberg. After sharing memories of her husband, Stanton told stories of his childhood in the sand dunes of the Sunset and Parkside Districts in the early twentieth century. Mr. Stanton had told similar tales to Mary Ada Williams for her book "Parkside Pranks and Sunset Stunts." Stanton, who was born in 1899, played minor league baseball before joining the San Francisco Police Department. He passed away in 1987. Our thanks to WNP member Bob Wallenberg for letting us share some excerpts from the letter.

My family was burned out on the top of Telegraph Hill on April 18, 1906. We were the second highest house on the hill, 100 feet from where Coit Tower now stands.

My folks had bought a lot on 19th Avenue [1319 19th Avenue, purchased for $44 by Stanton’s father in 1904] directly across from what is now Jefferson School between Irving and Judah Streets. Nineteenth Avenue was the last street that was cut clear through to Sloat Boulevard. All west of 19th Avenue was sand hills, willow brush, sage brush, bunch grass, lupin, and above all else, brush rabbits. Rabbits by the score. Out where you folks used to live on 34th Avenue there was lots of willow patches, called “Islands.” That’s willows that grow in patches. The wind eventually blows the sand away from the base of them, leaving islands of willows. 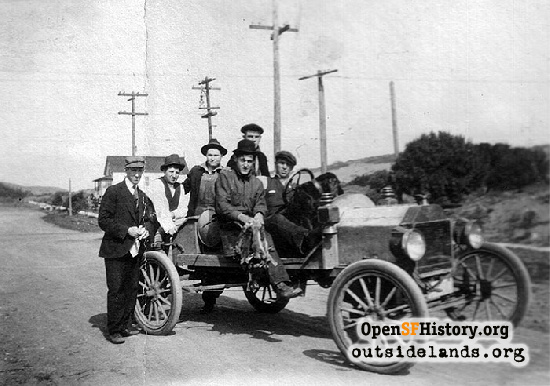 Every kid in the neighborhood those days, from 1906 till about 1934, owned one, two, or three dogs, all of which loved to hunt rabbits. So every Saturday, and Sundays too, we would meet, about four or five of us at the corner of 19th Avenue and Judah Street at about 7:00 a.m., ready for a day of rabbit hunting.

We used to work out through the sand hills that I have mentioned and about twelve noon we would reach Williams’ grocery store at the southwest corner of 32nd Avenue and Taraval Street. If we were lucky one of us might have a nickel in his pocket; with the coin we would buy a loaf of raisin bread, sit in front of the Williams’ store, and equally divide same and eat it. That was lunch. The Williams family had three more dogs that would join our entourage, then we would start out again and end up at Sloat Boulevard and Great Highway about one or two p.m. Then start back home more slowly, At 19th Avenue and what is now Ortega Street there was an old abandoned real estate shack. We would then sit there and take all the rabbits off the heavy cord and divide them. We would usually all take home about three, four, or five rabbits apiece.

Those were the days of our youth. None of those kids ever got in trouble those days. Then we also had all of Golden Gate Park to play in. Some of us used to take a gunny sack when the rabbit season was closed and hunt for bottles in the park. After four, five, or six weeks, we would stop a “Junk Man” and his horse and wagon and sell all the bottles to him for a dollar or two. So you can see that with all the things we had going for we kids in those days, that none of us ever got into trouble in the Outer Sunset. There were no houses beyond 21st Avenue, as that is where the high sand hills started those days. There were scattered homes out to about 22nd or 23rd Avenues further up south of the park.

Graduating from Laguna Honda School in 1915, Bill [brother] and I entered Lowell High School. Albert Wollenberg (now a federal judge) was in our class and also in the same class at Lowell. Our folks split up in 1917, so Bill and I then left school and went to work at the Union Iron Works as World War I was just starting. The war over, I worked for several of the power companies for several years, then went playing professional baseball in 1922. I enjoyed every minute of that sport. It gave me a chance to see America that I could not or should not have seen otherwise. All the traveling in those days was by train. I saw America coming out of the nineteenth century into the twentieth century. It used to hurt me to see the poor horses pulling huge plows and other heavy equipment through the mud fields of the Midwest, knee-deep in mud. About that time the first “steam driven” harvesting and other farming equipment were coming into general use, thanks to American ingenuity and ambition.

I played ball all up and down the Mississippi Valley, and all up and down the Pacific Coast, so you see I have been over most of America in its infancy. I still am in contact with a few old time baseball players that are still living in the Midwest. Not too many of them left though.

I hope I have not annoyed you with my life story, but it is nice to let folks that lived in the Sunset District know what that district was in the early days from 1906 and on. 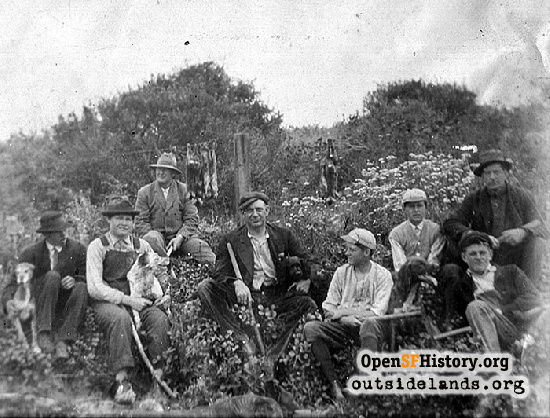